When one wants to publish his app on the Play Store (previously known as Android Market), he can upload screenshots of his app. I would like to take these screenshots with my current device (Motorola Droid) that I'm using to test the application.

Some website (e.g. LifeHacker) mention a way to do this,

To take a screenshot, you'll be required to enable USB Debugging under the settings, install the Android software development kit, and then connect to the phone with a debug tool

but they don't explain what I actually need to do step-by-step.

I would really appreciate if someone can help me out.

android screenshot device
Share
Improve this question
edited May 23 '17 at 11:45

Since you probably are a developer, you have SDK and working Eclipse for running Android applications. Just plug in the phone, and make sure you enabled on the Phone the USB Debugging, the device needs to show up in the DDMS perspective of Eclipse.

Once your device shows up in the DDMS perspective there is in icon there to capture the screen.

If you are already using Eclipse to develop your app, then you already have the Android software development kit installed. So, just open the ddms utility that is on the sdk-android/tools directory. There, you can take screenshots by selecting your device and pressing: Ctrl+S (Device -> Screen capture…). 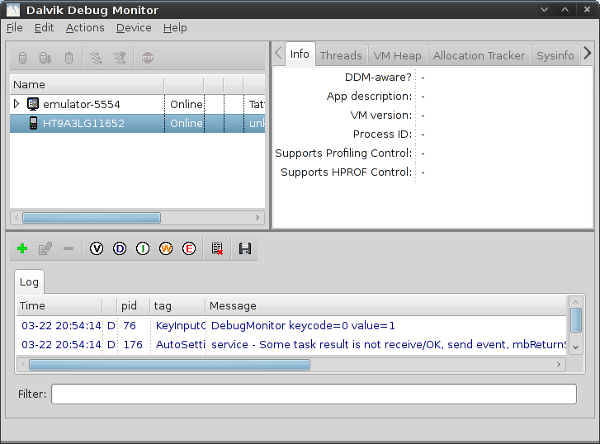 There's a tool that the Android SDK comes with to help you take screenshots if your device is connected to the computer. I'll explain both. First, for both you need to plug your device into the computer and have it be recognized by adb (aka, when you run "adb devices" it shows your phone).

Then you can either use Eclipse or DDMS:

Both methods lead you to the same tool which captures screenshots. Sometimes it can be a little buggy - occasionally I need to close/reopen the window in order to get it to take a screenshot.

Just noting that ddms is deprecated and this function is now available in the monitor tool (tools/monitor) instead.

Open monitor from a console window and select the device in the left panel. Click the camera (Screen Capture) icon above and you'll see the current screen. Then you can rotate if needed and copy or save the image. Refresh will grab a free screen grab in case you are saving multiple shots or didn't get what you wanted the first time.

Not the answer you're looking for? Browse other questions tagged android screenshot device or ask your own question.

1888
How to get screen dimensions as pixels in Android
1190
Is quitting an application frowned upon?
518
How to programmatically take a screenshot on Android?
1
programmatically taking screenshot of current screen in android device?
407
Google Play app description formatting
340
Android ADB device offline, can't issue commands
231
Where do alpha testers download Google Play Android apps?