Cannot initialise GameScene more than once using SpriteKit in Swift

I am trying to reset my game to the start screen every time this function is called by just creating a new scene:

I don't understand why I recieve this error in this scenario.

Is there a better way to reload the entire GameScene? Do I need to do anything with the old discarded GameScene instance?

You have probably defined this method inside your GameScene class, right?

Let's see what the API doc says about the view property of SKScene.

So I guess you are calling this method after the current scene has been removed from the view.

Is there a better way to reload the entire GameScene?

This approach is right, but you should call restart before the current scene has been removed from the view, otherwise it has no reference to your view.

Do I need to do anything with the old discarded GameScene instance?

Once you replace the current scene with the new one, if you don't have strong references to the old scene, ARC does remove it from memory.

To be sure the current scene is being removed you have several easy tools:

While the game is running take a look ⌘ + 6 at the Debug Navigator in Xcode, then invoke restart several times. If the used memory indicator grows up, then probably you are not releasing the GameScene from memory (or some other object). 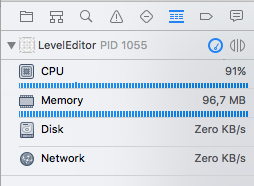 Not releasing the GameScene is one of the worst thing that can happen in a videogame because a scene holds references (directly or indirectly) to every other node in you current level/screen. It happened during the development of my game so I know what I'm talking about :D

deinit is automatically called when the object is removed from memory. Now each time you restart your scene, you should see the message

The GameScene has been removed from memory

on the console coming from the dead scene.

Not the answer you're looking for? Browse other questions tagged ios swift sprite-kit swift2 or ask your own question.

3
Restart app when coming out of background

1
How to restart the game in SpriteKit and Swift
1
Hiding or Showing Google Ad View in Swift with Sprite Kit
0
How to segue to different ViewController properly
5
Swift, spritekit: How to restart GameScene after game over? Stop lagging?
5
Swift: Deallocate GameScene after transition to new scene?
0
Getting an error when transitioning scenes? - SpriteKit
5
Swift 3 (SpriteKit): Reseting the GameScene after the game ends
4
Error with going back to a previous view in swift 3 Spritkit
0
How to add music to a game in SpriteKit