How to plot a histogram using Matplotlib in Python with a list of data?

I am trying to plot a histogram using the matplotlib.hist() function but I am not sure how to do it.

How do I make the probability as my y-value of each bar and names as x-values?

If you want a histogram, you don't need to attach any 'names' to x-values, as on x-axis you would have data bins: 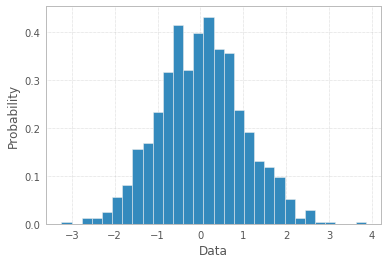 Note, the number of bins=30 was chosen arbitrarily, and there is Freedman–Diaconis rule to be more scientific in choosing the "right" bin width:

, where IQR is Interquartile range and n is total number of datapoints to plot

So, according to this rule one may calculate number of bins as: 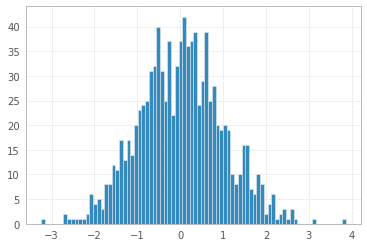 And finally you can make your histogram a bit fancier with PDF line, titles, and legend: 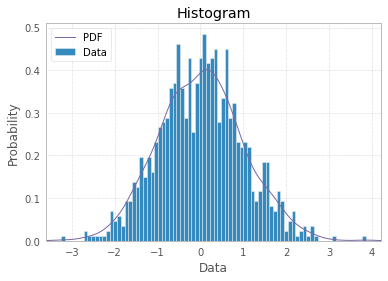 However, if you have limited number of data points, like in OP, a bar plot would make more sense to represent your data. Then you may attach labels to x-axis: 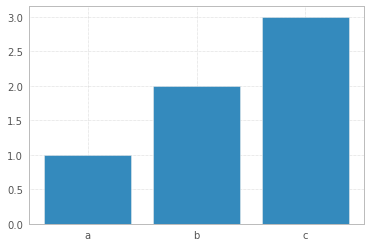 If you haven't installed matplotlib yet just try the command. 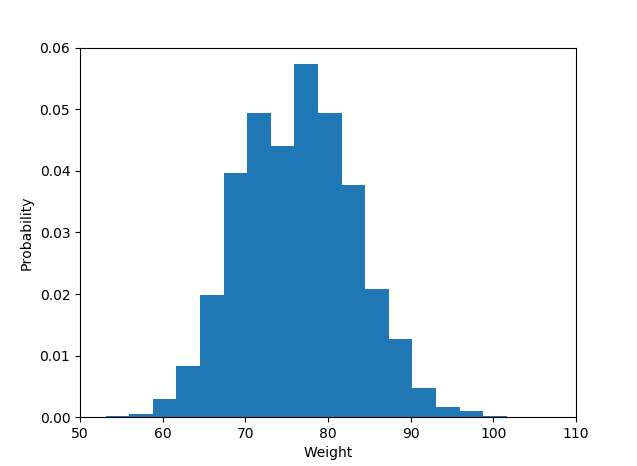 Though the question appears to be demanding plotting a histogram using matplotlib.hist() function, it can arguably be not done using the same as the latter part of the question demands to use the given probabilities as the y-values of bars and given names(strings) as the x-values.

I'm assuming a sample list of names corresponding to given probabilities to draw the plot. A simple bar plot serves the purpose here for the given problem. The following code can be used:

This is a very round-about way of doing it but if you want to make a histogram where you already know the bin values but dont have the source data, you can use the np.random.randint function to generate the correct number of values within the range of each bin for the hist function to graph, for example:

as for labels you can align x ticks with bins to get something like this:

This is an old question but none of the previous answers has addressed the real issue, i.e. that fact that the problem is with the question itself.

First, if the probabilities have been already calculated, i.e. the histogram aggregated data is available in a normalized way then the probabilities should add up to 1. They obviously do not and that means that something is wrong here, either with terminology or with the data or in the way the question is asked.

Second, the fact that the labels are provided (and not intervals) would normally mean that the probabilities are of categorical response variable - and a use of a bar plot for plotting the histogram is best (or some hacking of the pyplot's hist method), Shayan Shafiq's answer provides the code.

However, see issue 1, those probabilities are not correct and using bar plot in this case as "histogram" would be wrong because it does not tell the story of univariate distribution, for some reason (perhaps the classes are overlapping and observations are counted multiple times?) and such plot should not be called a histogram in this case.

Histogram is by definition a graphical representation of the distribution of univariate variable (see Histogram | NIST/SEMATECH e-Handbook of Statistical Methods & Histogram | Wikipedia) and is created by drawing bars of sizes representing counts or frequencies of observations in selected classes of the variable of interest. If the variable is measured on a continuous scale those classes are bins (intervals). Important part of histogram creation procedure is making a choice of how to group (or keep without grouping) the categories of responses for a categorical variable, or how to split the domain of possible values into intervals (where to put the bin boundaries) for continuous type variable. All observations should be represented, and each one only once in the plot. That means that the sum of the bar sizes should be equal to the total count of observation (or their areas in case of the variable widths, which is a less common approach). Or, if the histogram is normalised then all probabilities must add up to 1.

If the data itself is a list of "probabilities" as a response, i.e. the observations are probability values (of something) for each object of study then the best answer is simply plt.hist(probability) with maybe binning option, and use of x-labels already available is suspicious. 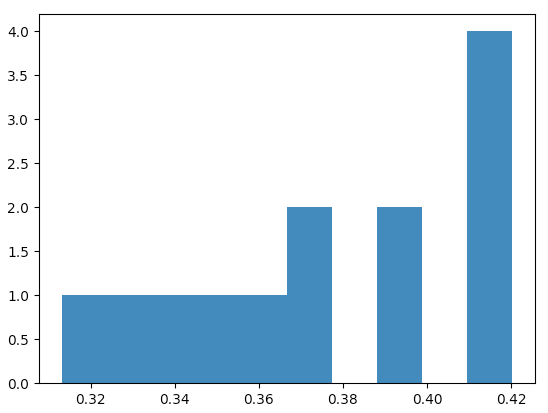 the result is a tuple of arrays, the first array contains observation counts, i.e. what will be shown against the y-axis of the plot (they add up to 13, total number of observations) and the second array are the interval boundaries for x-axis.

One can check they they are equally spaced,

Or, for example for 3 bins (my judgment call for 13 observations) one would get this histogram 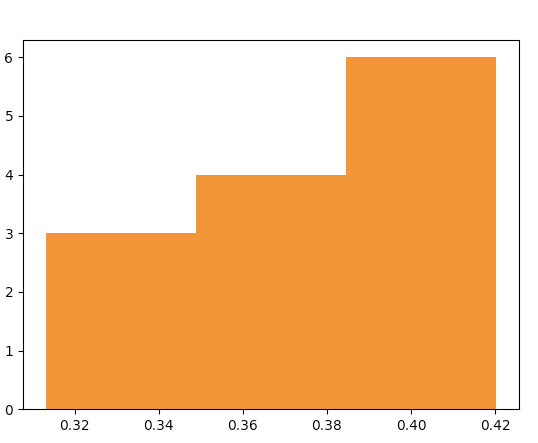 with the plot data "behind the bars" being

Not the answer you're looking for? Browse other questions tagged python matplotlib visualization data-visualization or ask your own question.

0
How to plot an array in a histogram in matplotlib
59
How to hide <matplotlib.lines.Line2D> in IPython notebook
4
Make a histogram of a pandas series
0
Plot histogram of Benford law
-1
matplotlib and numpy, issue formatting a 2D bar graph in Python
1
using the matplotlib .pylot for drawing histogram and the smooth curve which lies on the histogram
1
How to set the y axis in matplotlib histogram?

2216
How do I sort a list of dictionaries by a value of the dictionary?
5344
How to execute a program or call a system command from Python
2569
How do you split a list into evenly sized chunks?
2524
How do you change the size of figures drawn with Matplotlib?
3417
How do I sort a dictionary by value?
2910
How to make function decorators and chain them together?
4112
How to make a flat list out of a list of lists?
1355
Save plot to image file instead of displaying it using Matplotlib
2235
Renaming columns in Pandas
2798
How to iterate over rows in a DataFrame in Pandas