I have a 3D plot using patch and the default colormap is jet as I am using R2014a.So I use

There are quite a few different colormaps, and you can make your own custom colormap too. Use doc colormap to see them in more detail: 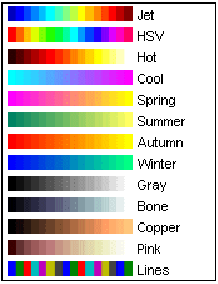 If you are using the HSV colormap and only seeing blue to red colours then it is because your colour axis limits are such that only that part of the colormap is being sampled. So if your data spans from 0.5 to 1.0 but you set the colour axis to caxis([0.0 1.0]) then you would only see half of the colours in the colormap.

In order to get a colormap like you describe, you can use this approach where you specify the minimum and maximum colours and create a colormap that blends from one to the other. Note that you will have to set your colour axis values according to the limits of your plot appropriately (commands like surf automatically stretch to include all the colours).

Not the answer you're looking for? Browse other questions tagged matlab colors matlab-figure color-scheme or ask your own question.