When to use Amazon Cloudfront or S3

Are there use cases that lend themselves better to Amazon cloudfront over s3 or the other way around? I'm trying to understand the difference between the 2 through examples.

Amazon S3 is designed for large-capacity, low-cost file storage in one specific geographical region.* The storage and bandwidth costs are quite low.

Amazon CloudFront is a Content Delivery Network (CDN) which proxies and caches web data at edge locations as close to users as possible.

When end users request an object using this domain name, they are automatically routed to the nearest edge location for high performance delivery of your content. (Amazon)

The data served by CloudFront may or may not come from S3. Since it is more optimized for delivery speed, the bandwidth costs a little more.

Both S3 and CloudFront allow domain aliases, however CloudFront allows multiple aliases so that d1.mystatics.com, d2.mystatics.com and d3.mystatics.com could all point to the same location increasing the capacity for parallel downloads (this used to be recommended by Google but with the introduction of SPDY and HTTP/2 is of lesser importance).

CloudFront also supports CORS as of 2014 (thanks sergiopantoja).

* Note: S3 can now automatically replicate to additional regions as of 2015.

CloudFront and S3 Bucket is not the same. In layman's terms: CloudFront enables you to accelerate content delivery of your web contents via Content Delivery Network (CDN) in edge locations, whereas S3 Buckets are where you store your actual files. CloudFront sources may not necessarily be from S3 but for easier visualization of S3 integration with CloudFront: 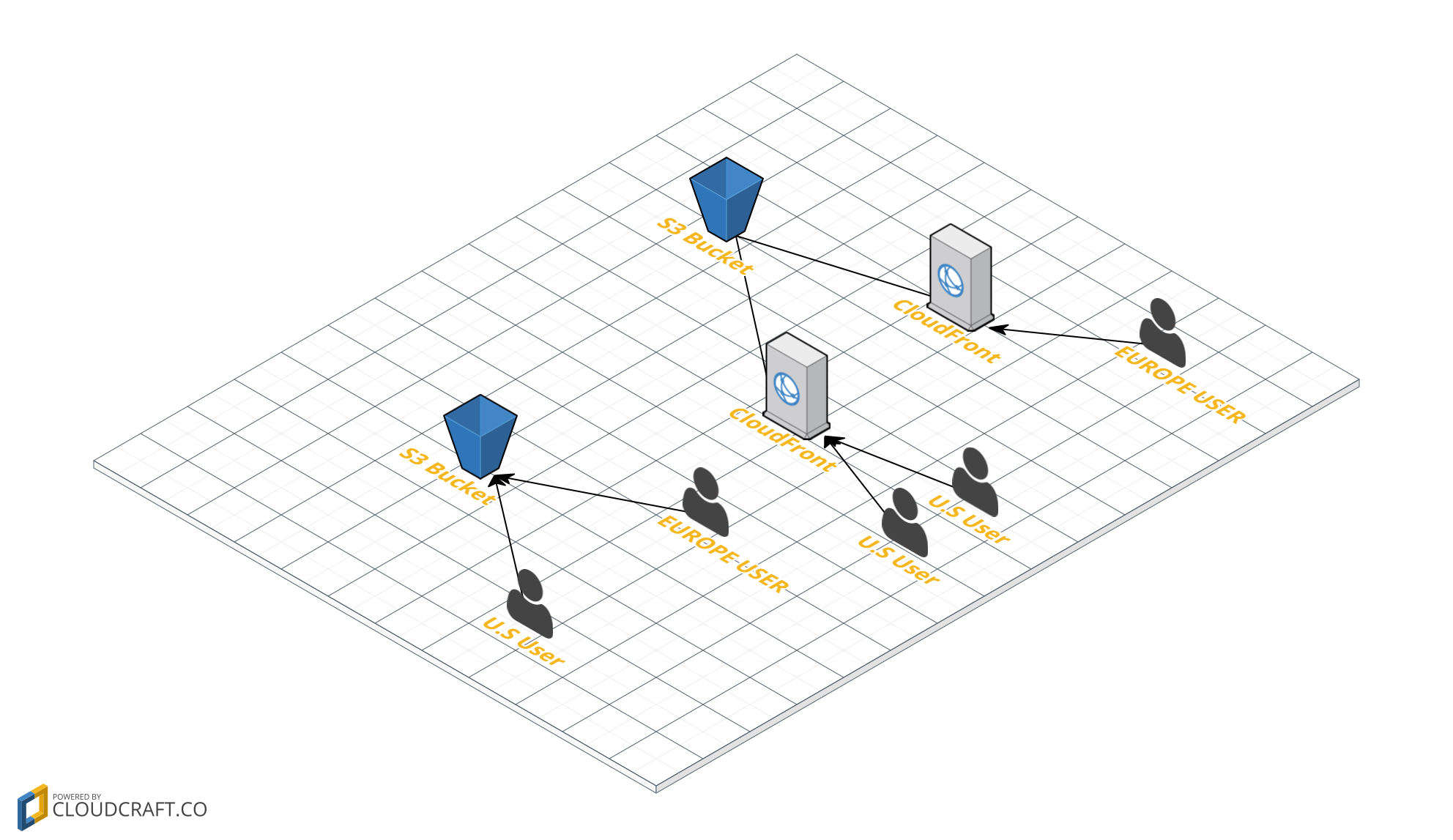 Another major difference is that CloudFront allows you to mirror the site on your server. Cloudfront then caches the files such as images, mp3 or video using its content delivery network.

This saves you having to duplicate your assets as you would when you use Amazon S3.

One way to set the file expiry for apache is in .htaccess. For example

Amazon S3 is a storage service in which we can store static files like:

Amazon CloudFront is a middle-ware which stands in between a user requesting for a file from AWS and the S3 data center in a specific region, CloudFront is used to speeds up distribution of your static and dynamic web content from S3 to the User.

You can understand it better by an example:-

For example, your S3 is located in AWS region US East (N. Virginia) which a data center location to store your files.

If a user from India tries to access a file from a AWS server in Virginia, then user would need to go to that specific location with a request, and this will take a lot of time.

What CloudFront does is that it stands as a middleware between user and AWS S3.

Every request is given a new DNS from CloudFront to the S3, so this would result in lower traffic as well as more parallel request processing.

Following is the list of current edge locations as per July-2016:-

From this you can conclude that if the users are limited are from the same region as your S3 is hosted on, then you do not require to go for CloudFront, and if the number of users is increased on global level then you should definitely use CloudFront for better latency and traffic control.

Another case for using CloudFront over S3 is that you can use an SSL certificate to a custom domain in CloudFront whereas you cannot in S3. A pretty good reason imho!

Amazon S3 is a Simple Storage Service, this can be used large amount of information i.e. Videos, Images, PDF etc.

CloudFront is a Content Delivery Network, which is closer to the end user and is used to make the information available on Amazon S3 in the least possible time.

A sample use case is Video on Demand.

Some advantages of using CloudFront for right use case:

Other possible use cases:

One aspect missed here is:

You can serve your Cloudfront resources from an s3 bucket completely bypassing your web server.

(Useful in situations where your web server pre-compiles and stores images and java-script. storing them on s3 means your server memory footprint is reduced )

Ex: On Heroku Slugs (complied application sizes can be reduced by using s3 and wrapping it with cloud-front CDN will improve throughput)

As first i would like to explain that Amazon S3 is the cloud Storage and Cloud Front is the content delivery network (CDN).

Amazon S3 is a great object storage platform if you are looking for a globally distributed storage system to protect against regions/zones going down. It is also great for static/fixed content that is not transactional and changing such as pictures, videos, images, backups, etc. Hope that helps!

You can see some Comparison between Amazon S3 and Amazon Cloudfront from here : http://www.bucketexplorer.com/documentation/cloudfront--amazon-s3-vs-amazon-cloudfront.html

Not the answer you're looking for? Browse other questions tagged amazon-web-services amazon-s3 amazon-cloudfront or ask your own question.

3
Does Amazon Cloudfront hide the file from being download directly?
1
Free images hosting with CDN
0
Rails + S3: Parse bucket and load images outside of controller