Why does this for loop bleed memory?

I am using ARC for my iOS project and am using a library called SSKeychain to access/save items to the keychain. I expect my app to access keychain items once every 10 seconds or so (to access API security token) at peak load and as such I wanted to test this library to see how it handles when called frequently. I made this loop to simulate an insane amount of calls and noticed that it bleeds a significant amount (~75 mb) of memory when run on an iPhone (not simulator):

I am using SSKeychain which can be found here. This test bleeds about ~75 mb of memory regardless if things are actually stored on the keychain.

Any ideas what is happening? Is my testing methodology flawed?

Which is what you would expect - a lot of memory allocated during the loop and then it is released.

Looking at the detail you see -

Persistent bytes on the heap of 2.36MB - This is the memory actually used by the app 'now' (i.e. after the loop with the app 'idling')

Persistent objects of 8,646 - again, the number of objects allocated "now".

Transient objects 663,288 - The total number of objects that have been created on the heap over the application lifetime. You can see from the difference between transient and persistent that most have been released.

You can also see from the Leak Checks track that there are no leaks detected.

So, in summary, your code use a lot of transient memory as you would expect from a tight loop, but you wouldn't see this memory use in the normal course of your application execution where the keychain was accessed a few times every second or minute or whatever.

Now, I would imagine that having gone to the effort of growing the heap to support all of those objects, iOS isn't going to release that now freed heap memory back to the system straight away; it is possible that your app may need a large heap space again later, which is why your code reports that a lot of memory is in use and why you should be wary of trying to build your own instrumentation rather than using the tools available.

You should use Instruments to figure out where/what is causing a leak. Its a very good tool to know how to use. 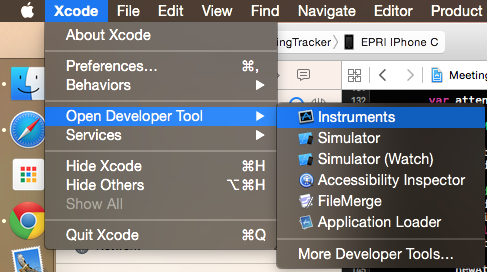 This article is a little dated but you should get the basic gist.

Going off of Paulw11's comment I stumbled across this,

The Application Kit creates an autorelease pool on the main thread at the beginning of every cycle of the event loop, and drains it at the end, thereby releasing any autoreleased objects generated while processing an event.

So when you check it with instruments make sure the event loop has had time to finish. Maybe all you need to do is let the program keep running and then pause the debugger and check instruments again.

Not the answer you're looking for? Browse other questions tagged ios memory memory-management memory-leaks sskeychain or ask your own question.

621
How to determine CPU and memory consumption from inside a process?
747
How can I measure the actual memory usage of an application or process?
425
How can I explicitly free memory in Python?
506
Tricks to manage the available memory in an R session
808
How do I discover memory usage of my application in Android?
1060
Can a local variable's memory be accessed outside its scope?
3327
How can I create a memory leak in Java?
892
Why should C++ programmers minimize use of 'new'?
763
Why is my program slow when looping over exactly 8192 elements?