I am writing an OTP application with a supervisor tree.

The main supervisor supervise two process a worker, QueueAddress, and another supervisor, QueueManager, with strategy one_for_one

QueueManager supervise a bunch of little Queues, with strategy simple_one_for_one, every time a new queue is started, its basic information are saved into the QueueAddress.

If a queue is killed, it is restarted correctly.

Now I want to test what happen if the supervisor QueueManager is killed.

If I send a message Process.exit(QueueManager, :kill) the whole application gets down.

How can I test, what happen if QueueManager gets killed ?

Below the image of the OTP tree, I want to kill Elixir.QueueManager 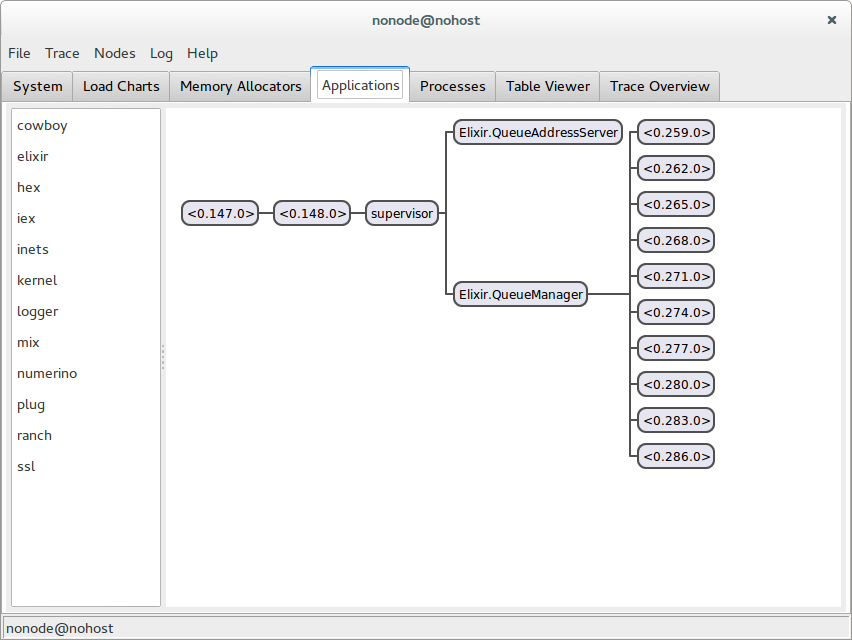 It was pretty simple...

If you want to terminate the supervisor A, supervised by B you could do something like:

If you want to bring back to life the supervisor A, still supervised by B you can do:

Not the answer you're looking for? Browse other questions tagged elixir otp or ask your own question.

2
Supervisor callback for child normal exit
3
Erlang supervisor. Restarting process, if it fails several times, give up and send message
10
How do I find the workers in my Elixir application?
3
Elixir - Supervised processes appear to block program execution
2
How can I know when it's the last cycle of my process restarted by the supervisor in erlang
1
Is it okay to have logic in a supervisor?
3
In Elixir, are dependent applications supervised?
6
How to trigger elixir supervisor tree termination from a supervised worker process