How does the compiler optimize templates?

Does it make any sense to write code like this?

I know that there are better ways to implement this example, but I wonder, if it is safe in general to assume that the compiler will identify dead code and instantiates this as

The thing to keep in mind here is templates are different from language features like generics in languages like C#.

It is a fairly safe simplification to think of templates as an advanced preprocessor that is type aware. This is the idea behind Template metaprogramming (TMP) which is basically compile time programming.

Much like the preprocessor templates are expanded and the result goes through all of the same optimization stages as your normal logic.

Here is an example of rewritting your logic in a style more consistent with TMP. This uses function specialization.

TMP was actually discovered as a happy accident and is pretty much the bread and butter of the STL and Boost.

It is turing complete so you can do all sorts of computation at compile time.

It is lazily evaluated so you could implement your own compile time asserts by putting invalid logic in a specialization of a template that you don't want to be used. For example if I were to comment out the foo<false> specialization and tried to use it like foo<false>(1.0); the compiler would complain, although it would be perfectly happy with foo<true>(1.0);.

Here is another Stack Overflow post that demonstrates this.

I specified "noinline" inorder to make it more obvious, and i got the value via cin instead of using a constant value to make sure compiler doesnt remove the function completly. 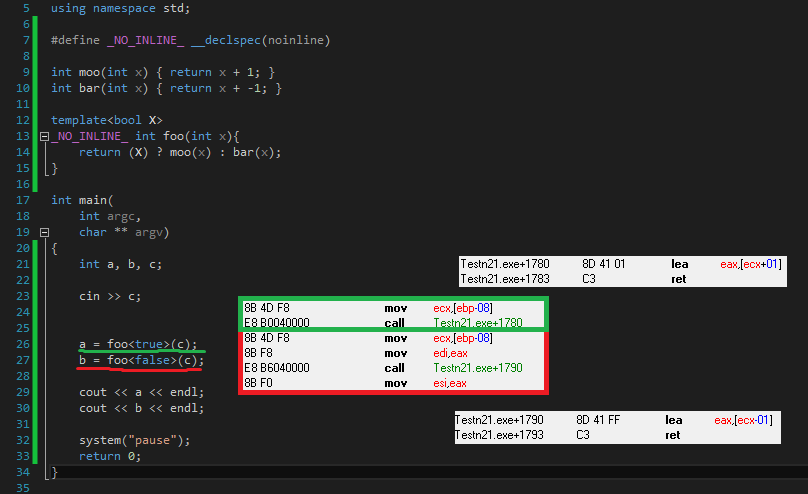 ...it is safe in general to assume that the compiler will identify dead code and instantiates this as

From a pedantic perspective, the answer is no. What really happens is you will end up with two functions that look like this:

Each of these functions will be optimized with the rather obvious dead code elimination optimization. You end up with the same result, but there is an intermediate step.

There is a different technique for doing what you want which has a few advantages. You can rely on C++ overloading and a helper type called std::integral_constant to make it 100% impossible to compile in the conditional expression.

Not the answer you're looking for? Browse other questions tagged c++ templates or ask your own question.

33
Compile-time assertion?
2
How to fix this template:

3166
What are the differences between a pointer variable and a reference variable in C++?
2804
What does the explicit keyword mean?
2923
How do I iterate over the words of a string?
1693
Why can templates only be implemented in the header file?
1077
Where and why do I have to put the “template” and “typename” keywords?
1833
C++11 introduced a standardized memory model. What does it mean? And how is it going to affect C++ programming?
854
What is the difference between 'typedef' and 'using' in C++11?
1388
Replacing a 32-bit loop counter with 64-bit introduces crazy performance deviations with _mm_popcnt_u64 on Intel CPUs
1432
Compiling an application for use in highly radioactive environments
488
Does the C++ standard allow for an uninitialized bool to crash a program?