How to choose bins in matplotlib histogram

Can someone explain to me what "bins" in histogram are (the matplotlib hist function)? And assuming I need to plot the probability density function of some data, how do the bins I choose influence that? and how do I choose them? (I already read about them in the matplotlib.pyplot.hist and the numpy.histogram libraries but I did not get the idea)

The bins parameter tells you the number of bins that your data will be divided into. You can specify it as an integer or as a list of bin edges.

For example, here we ask for 20 bins: 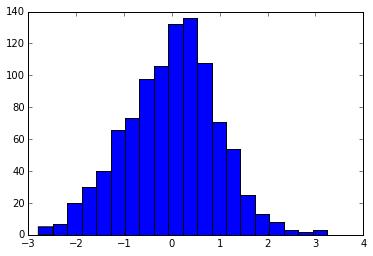 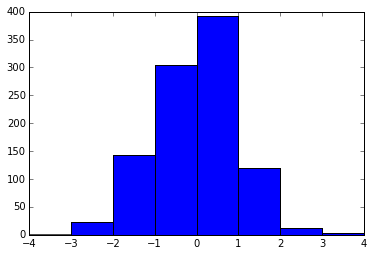 Your question about how to choose the "best" number of bins is an interesting one, and there's actually a fairly vast literature on the subject. There are some commonly-used rules-of-thumb that have been proposed (e.g. the Freedman-Diaconis Rule, Sturges' Rule, Scott's Rule, the Square-root rule, etc.) each of which has its own strengths and weaknesses.

If you want a nice Python implementation of a variety of these auto-tuning histogram rules, you might check out the histogram functionality in the latest version of the AstroPy package, described here. This works just like plt.hist, but lets you use syntax like, e.g. hist(x, bins='freedman') for choosing bins via the Freedman-Diaconis rule mentioned above.

My personal favorite is "Bayesian Blocks" (bins="blocks"), which solves for optimal binning with unequal bin widths. You can read a bit more on that here.

Edit, April 2017: with matplotlib version 2.0 or later and numpy version 1.11 or later, you can now specify automatically-determined bins directly in matplotlib, by specifying, e.g. bins='auto'. This uses the maximum of the Sturges and Freedman-Diaconis bin choice. You can read more about the options in the numpy.histogram docs.

Bins are the number of intervals you want to divide all of your data into, such that it can be displayed as bars on a histogram. A simple method to work our how many bins are suitable is to take the square root of the total number of values in your distribution.

You're correct in expecting that the number of bins has significant impact on approximating the true underlying distribution. I haven't read the original paper myself, but according to Scott 1979, a good rule of thumb is to use:

Not the answer you're looking for? Browse other questions tagged python python-2.7 matplotlib or ask your own question.

6329
How do I merge two dictionaries in a single expression?
6674
How do I check whether a file exists without exceptions?
5714
How do I execute a program or call a system command?
5234
How can I safely create a nested directory?
2911
How do I change the size of figures drawn with Matplotlib?
4689
How do I make a flat list out of a list of lists?
1387
How to put the legend outside the plot
118
Histogram Matplotlib
1535
Save plot to image file instead of displaying it using Matplotlib