I have the following code in Python 3:

Edit: I think this is actually a PyCharm issue. It actually uses the information in its warnings, and code completion. 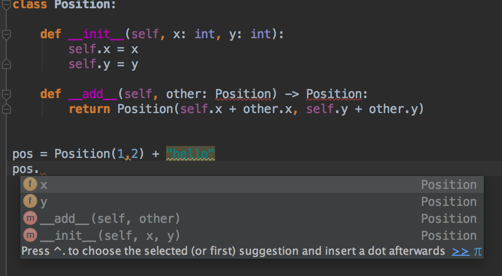 (The behaviour enabled by from __future__ import annotations might become the default in future versions of Python, and was going to be made the default in Python 3.10. However, the change in 3.10 was reverted at the last minute, and now may not happen at all.)

In Python 3.6 or below, you should use a string.

This is because Position must be defined before you can use it in an annotation, unless you are using Python with PEP 563 changes enabled.

This had been scheduled to become the default in Python 3.10, but this change has now been postponed. Since Python still is a dynamically typed language so no type-checking is done at runtime, typing annotations should have no performance impact, right? Wrong! Before Python 3.7, the typing module used to be one of the slowest python modules in core so for code that involves importing the typing module, you will see an up to 7 times increase in performance when you upgrade to 3.7.

If you use the Django framework, this may be familiar, as Django models also use strings for forward references (foreign key definitions where the foreign model is self or is not declared yet). This should work with Pycharm and other tools.

You may want to try some Python metaprogramming magic and write a decorator to monkey-patch the class definition in order to add annotations:

Self is also included in the typing-extensions package (available on PyPi), which although not part of the standard library, is sort of a "preview" version of the typing module. From https://pypi.org/project/typing-extensions/,

Check the PEP 484 section on forward references - tools conforming to that will know to unwrap the class name from there and make use of it. (It is always important to have in mind that the Python language itself does nothing with these annotations. They are usually meant for static-code analysis, or one could have a library/framework for type-checking at runtime - but you have to explicitly set that.)

Update: Also, as of Python 3.7, check out PEP 563. As of Python 3.8, it is possible to write from __future__ import annotations to defer the evaluation of annotations. Forward-referencing classes should work straightforward.

Update 2: As of Python 3.10, PEP 563 is being retought, and it may be that PEP 649 is used in instead - it would simply allow the class name to be used, plain, without any quotes: the pep proposal is that it is resolved in a lazy way.

Update 3: As of Python 3.11 (to be released in late 2022), there will be available typing.Self designed for this purpose. Check PEP 673! The PEPs 563 and 649 to resolve forward references, mentioned above are still contending and it is likely none of them will go forward as it is now.

However, if you also want this to work for subclasses, and return the specific subclass, you need to annotate the method as being a generic method, by using a TypeVar.

edit: @juanpa.arrivillaga brought to my attention a better way to do this; see https://stackoverflow.com/a/63237226

It's recommended to do the above answer instead of this one below.

[old answer below, kept for posterity]

Not the answer you're looking for? Browse other questions tagged python python-3.x pycharm type-hinting python-typing or ask your own question.

151
putting current class as return type annotation
63
type hinting within a class
65
Name not defined in type annotation
78
Type hints: solve circular dependency
32
Using the class as a type hint for arguments in its methods
30
typed python: using the classes' own type inside class definition
39
Self-reference or forward-reference of type annotations in Python
28
Recursive Typing in Python 3.5+
19
Why is the name of the containing class not recognized as a return value function annotation?
14
Type Hinting for objects of type that's being defined
See more linked questions

2864
How do I print colored text to the terminal?
2950
How do I change the size of figures drawn with Matplotlib?
2032
How to determine a Python variable's type?
3574
How do I get the current time?
1826
Getting the class name of an instance
2049
Determine the type of an object?
2542
How to upgrade all Python packages with pip
174
How can I tell PyCharm what type a parameter is expected to be?
1404
Relative imports for the billionth time
247
Type hinting a collection of a specified type