When I'm working with CSS, I'll often test in a browser - say, Chrome - right click an element, click Inspect Element, and edit the CSS right there. The use of arrow keys to change things like margin and padding makes lining things up super easy.

It's not too hard to then take those changes and apply them to the CSS file, but it would be cool if I could just right click the selector in the inspector and select "export" or "copy", and have the contents available in my clipboard.

I have found the answer to this, at least as of Chrome v14.

While in the Elements section, just click on the "filename:linenumber" link next to the CSS rules. The CSS file that shows up will contain all of the modifications.

In Chrome, you can right-click a CSS file in the Sources tab and click "Local Modifications"

This shows you all of your local changes. Each revision is timestamped and you can rollback to any previous revision.

See the Live Editing and Revision History section of this tutorial.

Firediff is a Firebug add-on that tracks changes done in Firebug. It logs everything you'll do in the HTML pane (great) but also your brief use of the Web Developer Toolbar extension (not so great), say Shift-Ctrl-F to obtain a font-size information in px.

I have seen a Firebug extension in Chrome but didn't test it, I use Firediff with Firefox.

I built a Chrome extension that does exactly this.

It's called StyleURL - it takes whatever CSS changes you made in Chrome Inspector and outputs valid CSS as the diff: https://chrome.google.com/webstore/detail/styleurl/emplcligcppnlalfjknjbanolhlnkmgp

Here's an example where I added "padding-bottom: 50px" to this page: 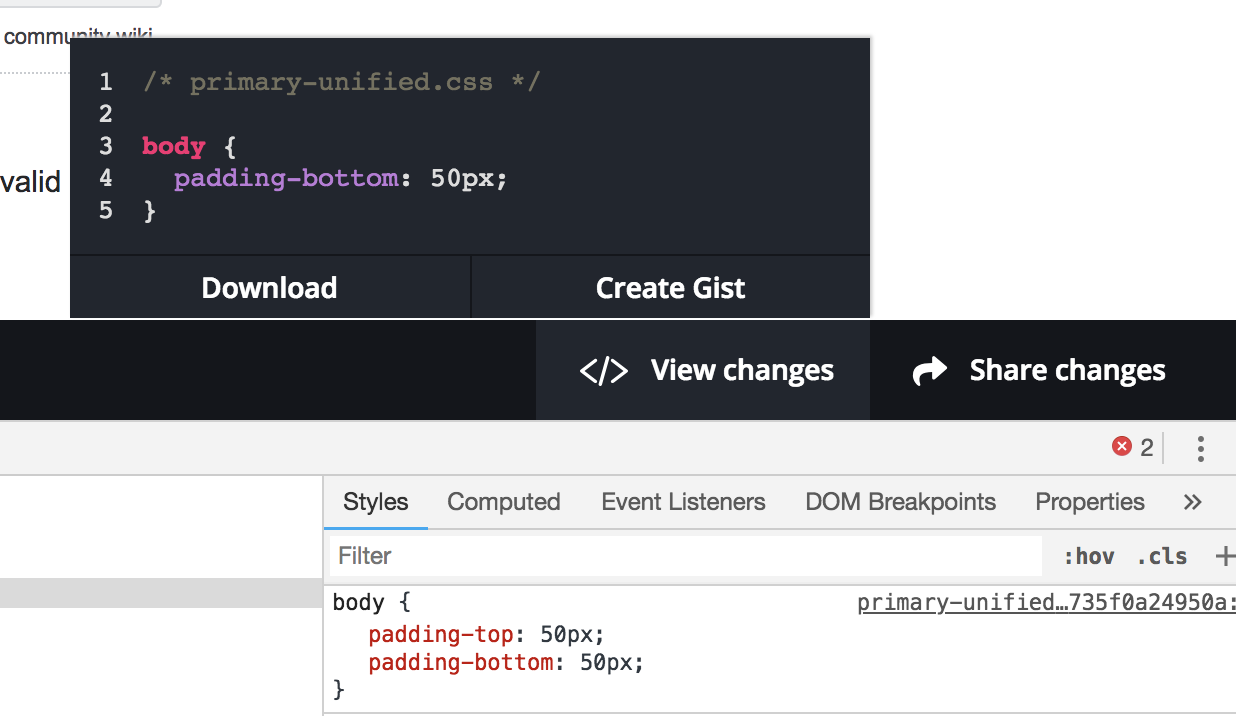 It's open-source and on GitHub too: https://github.com/Jarred-Sumner/styleurl-extension

In Chrome there is also the Changes tab in the console drawer that displays all the modifications of CSS. It's not an export, but at least it is very convenient to quickly grasp what has changed. 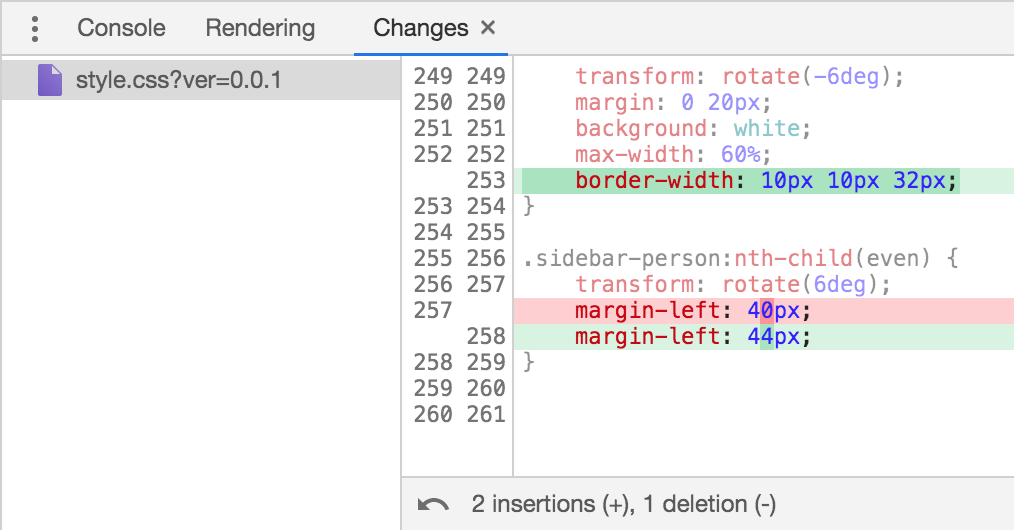 I've suggested this product on SO before (I'm not affiliated with them in any way).

Excellent product. Sounds like exactly what you're looking for and much more.

EDIT: Several other answers here have mentioned Google Chrome's ability to link to your local files (which is very very cool). Check out the other answers!

If you edit external CSS, then you can drag its latest revision out of the Resources panel into any text editor that supports DnD (see http://www.webkit.org/blog/1463/web-inspector-styles-enhanced/, the "Persisting Changes" section for more detail.) You can also revert your CSS changes to any earlier version of the stylesheet resource (in the right-click popup menu of any stylesheet revision.)

As mentioned by cloudworks, the answer to this has changed. This can now be accomplished rather well by the Chrome DevTools Autosave extension. This tool tracks CSS and JavaScript changes made within the Chrome Developer Tools console, and saves them back to local files. For instructions to install and setup the extension, please refer to the guide written by @addyosmani on his blog, here. 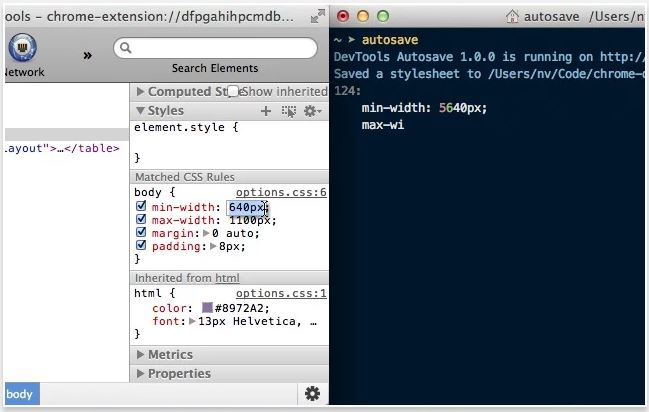 There is also a handy screencast which details the extension rather well.

Both Firefox and Chrome support this feature now, but worth to note that in some platforms if not all Chrome does not show it by default, you need to enable the "Changes" view to see it (in my Kubuntu Linux 20.04 it wasn't by default), here is how you can enable it: go to the "Customize and Control DevTools" button in the Developer Tools bar > "More tools" > "Changes", then the tab will appear at the button: 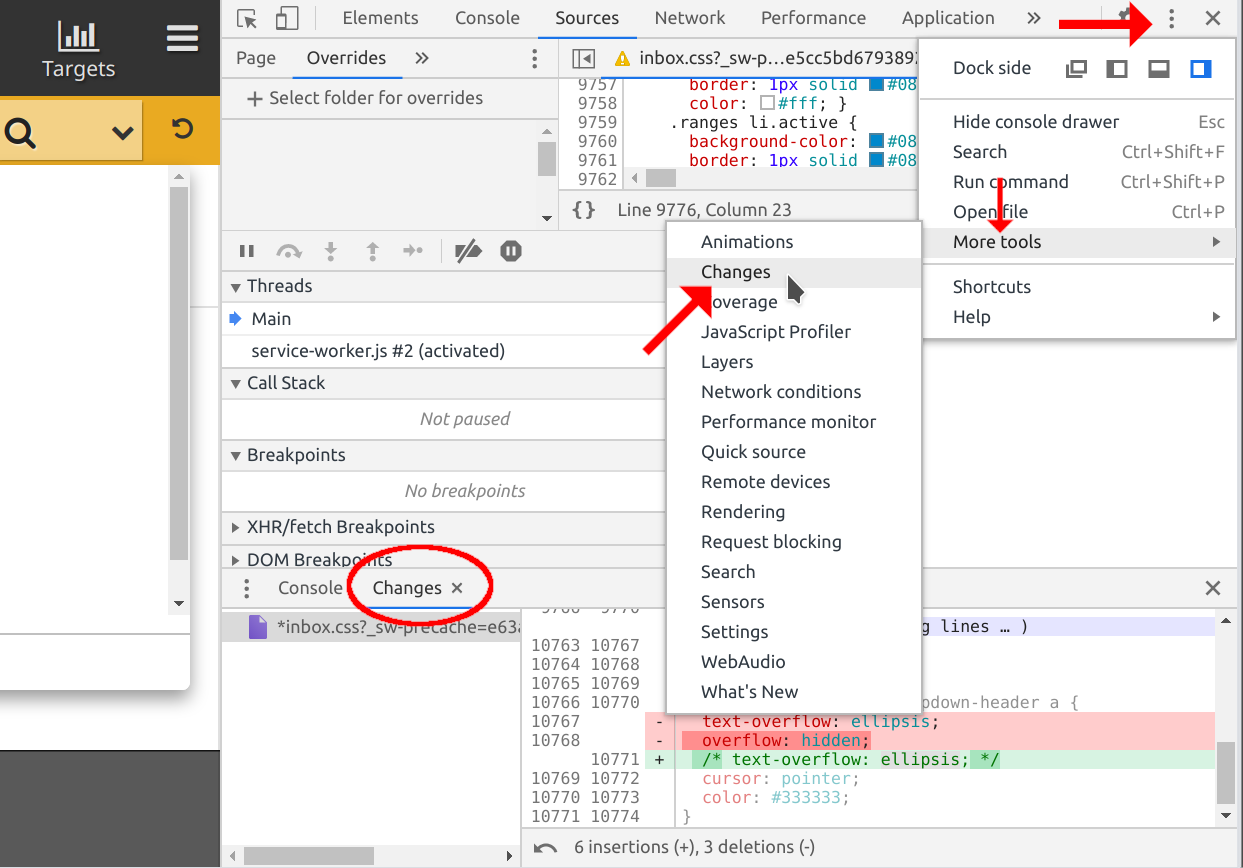 In Firefox there is no need to enable it, but if you come from the Chrom* world may be hard to find it. Just check the last section in the right at the "Inspector" tab:

With Workspaces you can have your CSS saved as you type them in your inspector (in Chrome). The problem is that every change is automatically saved and there's no way to disable this feature, as pointed in http://www.html5rocks.com/en/tutorials/developertools/revolutions2013/ and Disable automatic saving of CSS changes in Chrome Developer Tools.

If you're using the Firefox stock dev tools you can edit the css directly in the tools dialog - click the CSS viewport button (that's the button at the top with the {} symbol) and edit your css directly. It will update in realtime in the browser and when you're done just copy-paste it directly into your css file. Nice!

To add an answer for Safari specifically — it's kind of possible.

When you edit CSS in the Styles section in the Inspector for an existing CSS file, you can hit Cmd-S to re-save the entire file with the changes. However, if you're using a meta language like Sass / preprocessor / generating your CSS with bundling etc, I don't think this really solves that problem, though it may be possible with CSS source maps.

When you edit CSS at the top of the Styles section, under Style Attribute to add inline styles (not tied to an existing CSS file), it doesn't seem possible to easily export all of those changes. For now, I'm just copying and pasting the overrides manually for each element.

The official Apple docs are a little dated but found here: Web Inspector Tutorial - Editing Code to Change Your Webpage.

To let you understand it easily, you can think of Firebug's inspector is embedded into your text editor.

That way you don't have to make the changes manually again in your code editor after you tweaking it using Firebug or Webkit's developer tools.

Not the answer you're looking for? Browse other questions tagged css webkit google-chrome-extension web-inspector or ask your own question.

314
What is WebKit and how is it related to CSS?
143
Removing rounded corners from a <select> element in Chrome/Webkit
46
Export CSS of DOM elements
703
Using Chrome's Element Inspector in Print Preview Mode?
582
Javascript / Chrome - How to copy an object from the webkit inspector as code
897
Remove blue border from css custom-styled button in Chrome
10
Inspect single letter in Google Chrome Inspector or Firebug