How to set up GDB for debugging Rust programs in Windows?

How can I configure GDB for debugging Rust programs in Windows, including setting-up the Rust pretty-printers, and debugging either in an IDE or the command-line?

First, you need to compile your programs with the Windows GNU ABI Rust installation. The MSVC ABI uses a different debugging format than the one GDB understands, so that won't work. MSVC ABI compiled programs would have to debugged with Visual Studio (or possibly LLDB, in the future).

Second step is to get GDB itself. The recommended option is to get it from either TDM-GCC or mingw-w64:

Rust provides some extensions to GDB to enable a better display of certain Rust native types, such as enums, slices, and vectors. With the pretty-printers, variables of this type will be displayed in a structured way, instead of the low-level representation. For more info see https://michaelwoerister.github.io/2015/03/27/rust-xxdb.html .

The pretty-printers are only included in the Linux (and Mac OS?) distributions of Rust, not the Windows one (Issue reported). But they can be made to work in Windows.

Download the Linux Rust archive (https://www.rust-lang.org/downloads.html), extract and locate the rustc/lib/rustlib/etc directory inside. Now copy the etc folder to $RUST/bin/rustlib , where $RUST is the location of your Rust installation. The Python scripts there will then be located in $RUST/bin/rustlib/etc.

If you only intend to use GDB from within RustDT, and have RustDT 0.4.1 or above, you can skip to the next section: "Using GDB in Eclipse with RustDT".

Now, GDB needs to be configured to load these scripts. Locate the gdbinit file of your GDB installation (for TDM-GCC, should be gdb64\bin\gdbinit, for mingw-w64: mingw64\etc\gdbinit). Now add the following text to the end of the file:

But replace $RUST_GDB_ETC with the location of the etc directory with the Python files, for example D:/devel/tools.Rust/rust/bin/rustlib/etc. Note, even though it's a Windows path, make sure you use the forward-slash ('/') as a path separator, to avoid escape issues in that string literal.

To verify this works, start gdb. If you see the "---- Loading Rust pretty-printers ----" message before the prompt and no Python errors after, things should be working. To confirm, type the command info pretty-printer. There should be a line with "rust_pretty_printer_lookup_function" in the output if the pretty-printers were loaded successfully.

Using GDB in Eclipse with RustDT

If you successfully completed the steps before, you are nearly good to go to use GDB from within RustDT. Just a few details: 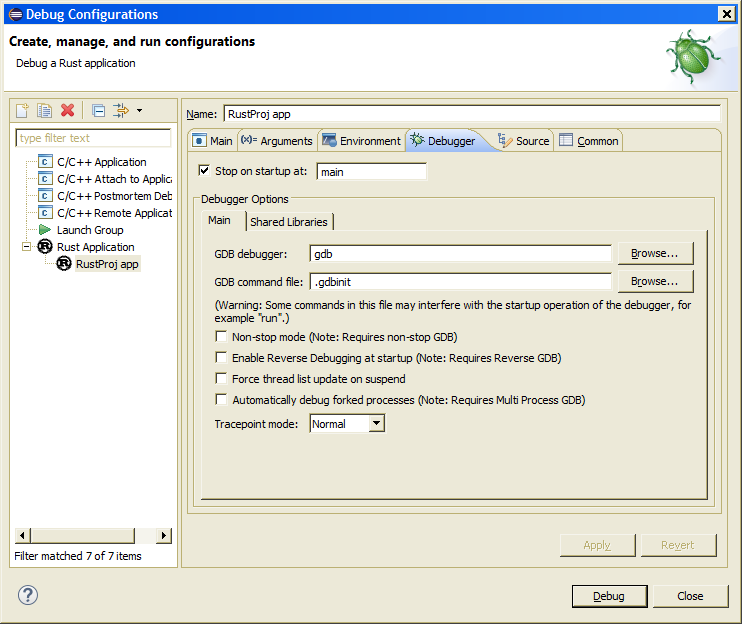 Not the answer you're looking for? Browse other questions tagged debugging gdb rust or ask your own question.

463
How do I print debug messages in the Google Chrome JavaScript Console?
504
Debugging with command-line parameters in Visual Studio
96
How to load program reading stdin and taking parameters in gdb?
1563
How do I debug Node.js applications?
146
Do you debug C++ code in Vim? How?
163
How do I set a conditional breakpoint in gdb, when char* x points to a string whose value equals “hello”?
403
How do I run a program with commandline arguments using GDB within a Bash script?
593
Writing to output window of Visual Studio
10
Debugging Rust with gdb
5
Rust debug library with GDB