Why do programming competition contestants use C++ and Java? [closed]

After competing in and following this year's Google Code Jam competition, I couldn't help but notice the incredible number of [successful] contestants that used C/C++ and Java. The distribution of languages used throughout the competition can be seen here.

After programming in C/C++ for several years, I recently fell in love with Python for its readable/straightforward nature. More recently, I learned functional languages like OCaml, Scheme, and even logic languages like Prolog. These languages certainly have their merits and, in my opinion, can be applied more easily than C++ and Java for certain situations. For example, Scheme's use of call/cc simplifies backtracking (a tool required to answer several problems) and Prolog's logic specification, although inefficient due to its brute-force nature, can drastically simplify (and even automatically solve) certain problems that are difficult to wrap one's brain around.

It is clear that a competition contestant should use the tools that are best suited for the challenge. Even x86 assembly is Turing complete - that doesn't justify solving problems with it. In this case, why are the contestants that use less common languages like Scheme/Lisp, Prolog, and even Python significantly less successful than contestants that use C/C++ and Java? Worded differently, why don't successful contestants use languages that, although may be less mainstream, are arguably better tools for the job?

There are several motivations for my question. Most importantly, I would like to become a better programmer - both in the practical aspect and the competition aspect. After being introduced to such beautiful paradigms like functional and logic programming, it is discouraging to see so many people discard them in favor of C/C++ and Java. It even makes me question my admiration for said paradigms, worrying that I cannot be successful as a Lisp/Scheme/Prolog programmer in a programming competition.

Great question! As someone who has dabbled in programming contests a bit myself, I may have something to say.

[Let's get the standard disclaimer out of the way: contest programming is only loosely related to "programming in the real world", and while it tests algorithmic and problem-solving skills and the ability to come up with fast bug-free working code under time pressure, it does not necessarily correlate with being able to build large software projects, write maintainable code, etc (beyond the fact that well-structured programs are easier to debug).]

Now for some answers:

I liked Jerry Coffin's idea of plotting contestants of the Google AI contest, so I took all of the results and plotted them (calculated mean, standard deviation, and then graphed the normal distribution curves in Excel).

With Lua and JS, got this: 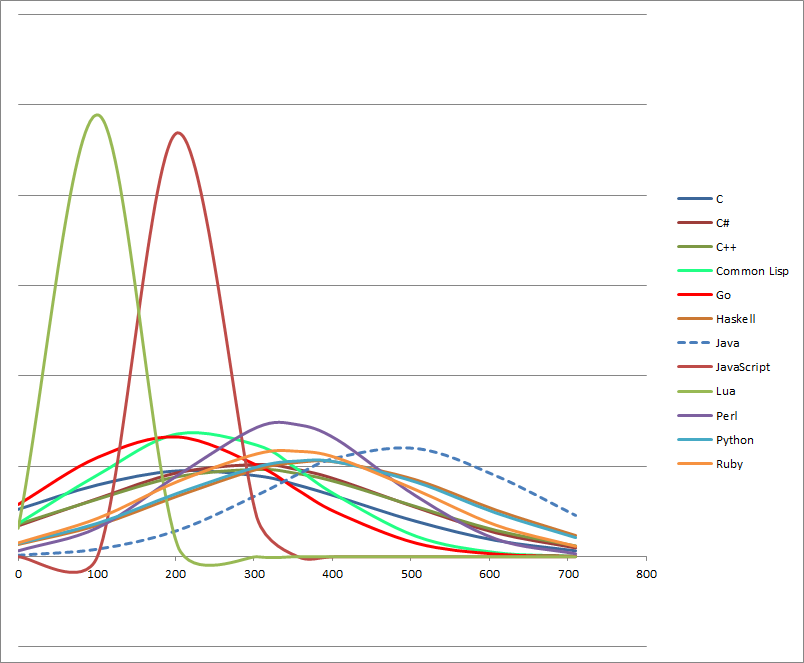 Without (there were few contestants, so maybe the results are skewed): 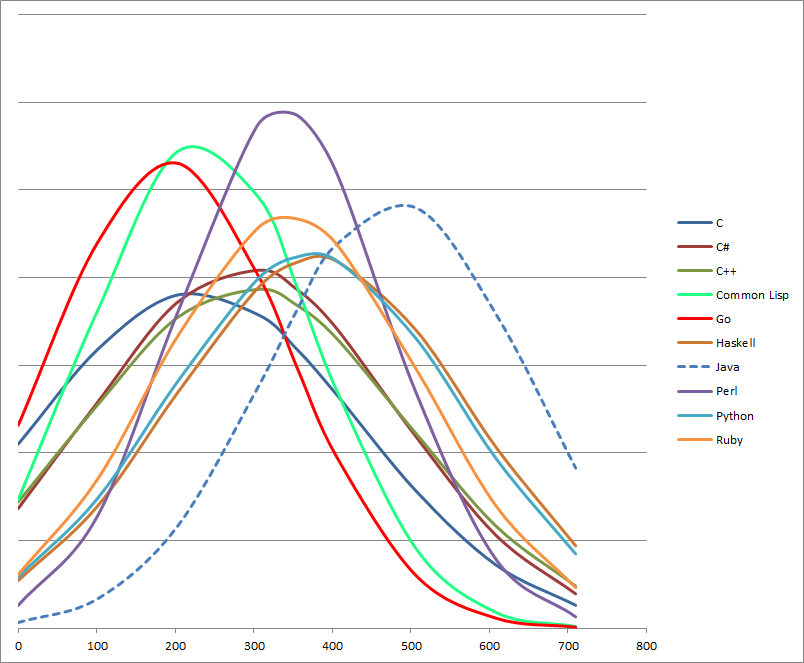 It looks like Java participants did markedly worse than the rest, while Go, Common Lisp, and C are on the better end.

Why we all speak English and not Esperanto? Well, it just happened so. Even though English is inconsistent and bloated and Esperanto is intentionally designed as 'better tool'.

Thus, one reason is a tradition. In most schools programming is still taught in C/C++, Java, Pascal or even Basic. And participate in those contests mostly students, which choose language they know better.
Also, you can notice that most algorithmic books feature psedudocode in style of Pascal or Ada, and very very rarely - Lisp. I don't know why, perhaps also a tradition. Or perhaps it's just not so good for the algorithms.

Another reason would be speed. Although it's not a problem for Google Code Jam, in almost all contests 2x speed gap is a difference between 'Accepted' and 'Time Limit' verdicts.
In other words, if optimal algorithm in C++ runs 10 times faster than in Ruby, it may mean that sub-optimal algorithm in C++ will still be faster than a good one in Ruby. And contest authors usually don't want to allow O(n^2) submissions, if O(n*logn) can be achieved.

First, I'd question your premise [edit: or what I take to be a premise -- that contestants using C++ and Java fare about equally well]. For example, here's what languages were used for the entries that came in the first 100 places and the last 100 places in Google's recent AI contest: 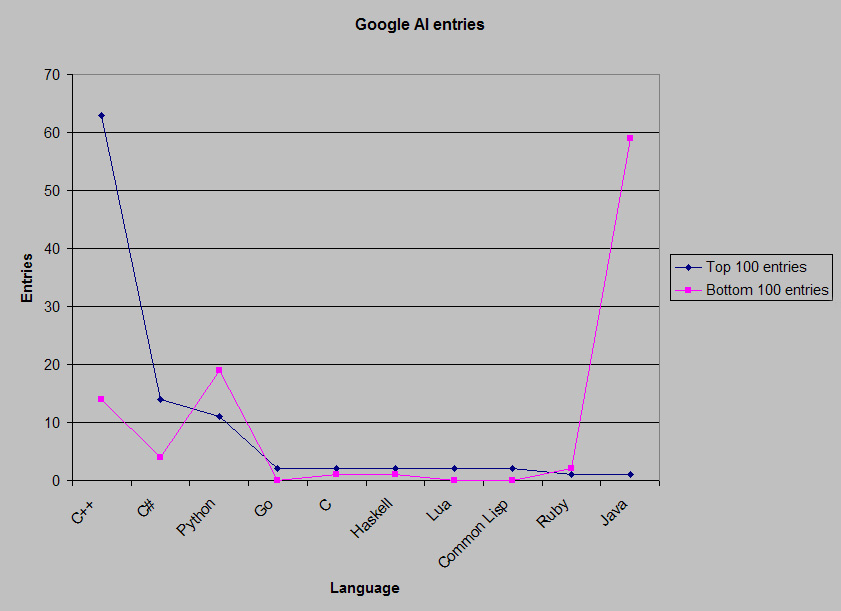 Contestants using C++ and Java did not seem to be anywhere close to equally successful in that contest. Contestants using Python didn't seem to fare particularly well either, though there were considerably fewer of them, weakening any conclusion in that regard.

Second, of course, an awful lot of the explanation (as others have pointed out) is undoubtedly just the number of people who are familiar with each language. There are probably more people taking a course in Java right now than the total number of people who've ever written any Lisp, Scheme or Prolog.

Edit: I think a third possibility is simply versatility. To pick an extreme example, Prolog is very well suited to a few problems, but equally poorly suited to many others. Few people can (or at least do) learn more than one or two languages well enough to use them in a contest, so most people who are interested in such things are likely to choose languages that can work reasonably well for almost anything, rather than attempting to learn a specialized language for every problem that might be chosen.

In nearly all Google Code Jam rounds, more of the higher-performing contestants code in C++.

Look at number of finalists by countries: http://www.go-hero.net/jam/10/regions. notice number of people from East Europe and Russia. those places have very strong C++ communities, as well as Java, for number of reasons.

You are free to draw your own conclusions though.

First of all, as you have pointed C++ and Java are mainstream languages. These automatically means that people who start doing programming competitions will be introduced to them first - by the way who learns Lisp as a first language:) I also participate regularly in such competitions - I use C++ to compete, although my favorite language is Java. It is just I want to practice another language apart from Java - also C++ is a little bit less verbose and runs faster which is important for programming competitions. Now to my point - people become experts first in mainstream languages. To participate in programming competitions you must have quite a good grasp of the language you are using. You don't have time to search on the internet for stupid things - like forgot a construct. It is just that speed is an important factor there. To use Lisp in a competition, you must be fond of it. I don't think there are such many people out there. Correct me if I am wrong. And honestly the pros you have mentioned like simplifies backtracking: In whatever language backtracking is easy - declare a method and just call it again for every possible outcome. It couldn't be simpler. I haven't felt till now that the language I am using is trying to trip up my feet for programming competitions.

OMG ... People are all going through the Stats and Figures !!

Lets not forget the basics.. These are the only two languages (mostly) which are taught to people in college/schools...!

A vital reason might be that every contests don't support languages like python or prolog. Specially ACM ICPC World Finals support C/C++ and Java. And TopCoder also supports only C++, Java, C#, VB, and now Python. It is natural for the contestants that they will choose one language that is available in every contest. Another reason might be execution speed. And yes, another reason is these are the languages that most of the people learn first.

Big libraries were a selling point for Java in ACM ICPC. It's handy to be able to realize you want some random data structure or algorithm and just pull it out of the standard libraries.

Keep in mind that C++ is not only the majority among all contestants, but as the rounds progress, its percentage just keeps and keeps improving.

I'd say it is true that most of the participants are students (However, since it is an open tournament with chances to a job interview with google, then you have to consider that many who participate are graduated). But the latest rounds are only for people with ton of experience. They are not just students who just learned to code in C++ / Java.

Of course, the student argument also works against languages like LISP and OcaML or ProLog. That is languages, that are used a lot in AI areas but in the mainstream world students are the most likely to be learning and use them.

Big contests other than google's support few languages, but that still wouldn't explain why Pascal or .net are not near the level of Java (As they tend to be equally supported in the major contest events).

A lot of the best coders in these contests know a lot of languages. But they still prefer to use C++ during the rounds it must be for a bigger reason than "learned C++" first.

I would argue against the claim that languages other than C++ or Java are better tools for the job. If direct data says that the finalists are more likely to use C++ and Java it is a direct contradiction to that claim.

Not the answer you're looking for? Browse other questions tagged language-agnostic or ask your own question.