Can I use a constexpr value in a lambda without capturing it?

I would want to use a constexpr value in a lambda. Reading the answer to Using lambda captured constexpr value as an array dimension, I assumed the following should work:

Should this be considered a bug in clang 3.8?

The above code does compile with gcc 4.9.2. If I change the lambda expresion to capture explicitly:

error: the value of ‘i’ is not usable in a constant expression ...

Should this be considered a bug in clang 3.8?

Yep. A capture is only needed if [expr.prim.lambda]/12 mandates so: 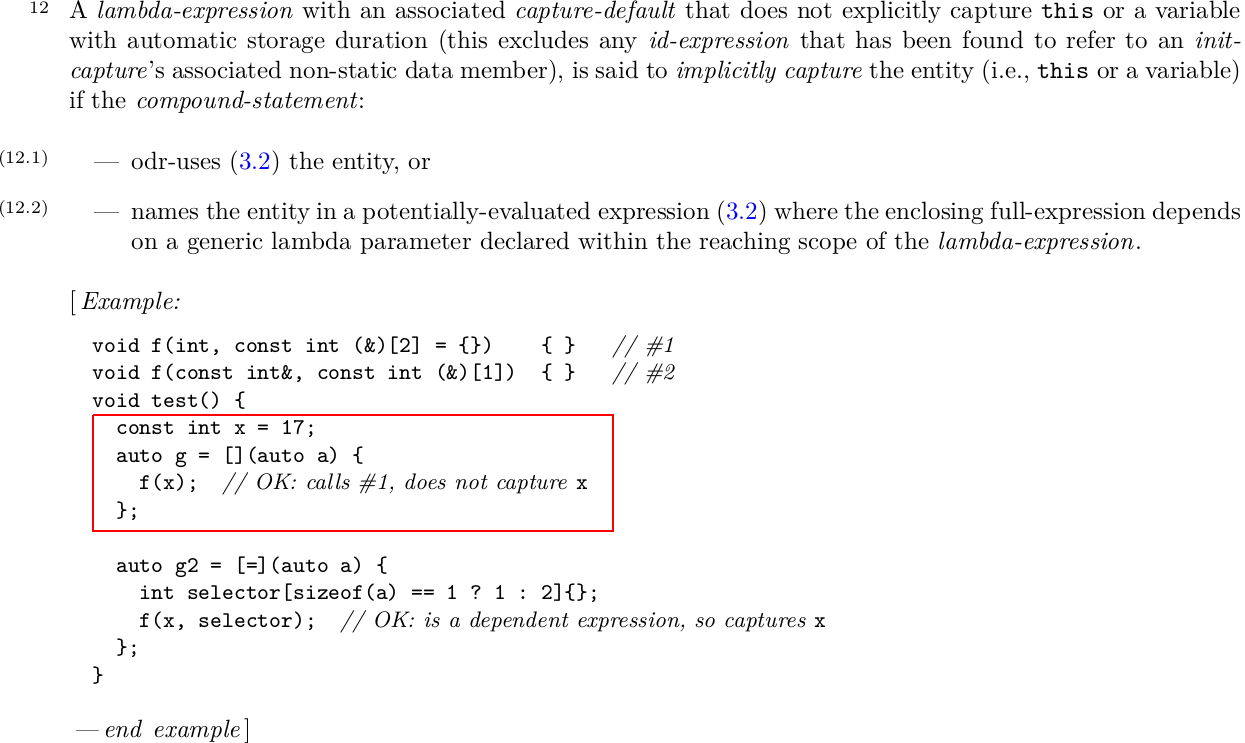 Note in particular the highlighted example. f(x) does not necessitate x to be captured, because it isn't odr-used (overload resolution selects the overload with the object parameter). The same argumentation applies to your code - [basic.def.odr]/3:

A variable x whose name appears as a potentially-evaluated expression ex is odr-used by ex unless applying the lvalue-to-rvalue conversion (4.1) to x yields a constant expression (5.20) that does not invoke any non-trivial functions…

This requirement is certainly met.

…and, if x is an object, ex is an element of the set of potential results of an expression e, where either the lvalue-to-rvalue conversion (4.1) is applied to e, or e is a discarded-value expression (Clause 5).

i is its set of potential results as per [basic.def.odr]/(2.1), and the l-t-r conversion is indeed immediately applied as its passed to a non-type template parameter of object type.

Not the answer you're looking for? Browse other questions tagged c++ lambda c++14 constexpr or ask your own question.

2
lambdas in Clang and MSVC require to capture object not ODR-used
112
Why are preprocessor macros evil and what are the alternatives?
5
Why can I "captureless-capture" an int variable, but not a non-capturing lambda?
6
Using lambda captured constexpr value as an array dimension
8
constexpr variable not captured
-2
Why can't a constexpr "variable" be seen only by a capturing lambda?