How do I download previous saved revisions of a Google Apps Script?

I am still attempting to recover from somehow 'loosing' a Google Apps Script when I created a copy of the script to fork the code to another project... My thought was to attempt to download older revisions of the Google Apps Script via the drive API, but this page indicates that perhaps it is not possible.

Actions such as versioning, publishing or executing the script are not available through the API.

So I attempted it anyway and alas this error occurs...

So is there no mechanism to download previous versions or "Revisions" of Google Apps Script? What I would love is to get access to 'Revision 1' shown here within the script.google.com interface: 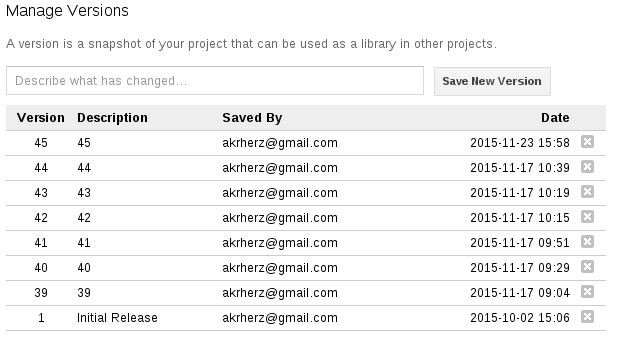 This is a bit manual but:

For example if your library is called something like "MyOldCode", include some code like this in your new script:

Put a breakpoint below the "var a" line, run getOldCode() with the debugger and then step into anExampleFunction(). This will open up one file of your old code allowing you to copy and paste it elsewhere.

You can then piece together v1.

FYI, the Apps Script API can get project files from a previous version number: https://developers.google.com/apps-script/api/reference/rest/v1/projects/getContent

If you'd like to see this in the Apps Script CLI, clasp, like clasp pull 3, I'm sure I could add this feature. https://github.com/google/clasp/ Just file a new issue.

Grant is the right answer. Clasp is the way. I just wanted to update the command for the current state of clasp which is

Not the answer you're looking for? Browse other questions tagged google-apps-script google-drive-api or ask your own question.