I am using docker toolbox on Windows 7 to run docker. (docker version 1.9.1)

As it turns out, the docker machine creates its VM at C:\Users\username\.docker\machine\machines\default. As I commit the images, the size of VM at this location bloats up. Since it's Windows, I can't afford the luxury of space on the C drive.

Is there any way I can change the location of the default machine?

This is what worked perfectly for me on Windows 7:

Docker Toolbox will now create all the files at the location pointed at by MACHINE_STORAGE_PATH.

Note that creating a new VM with the new storage path is not ideal, as the Docker Quickstart Terminal scripts don't seem to work with anything not named "default".

If you've already got a VM sitting in the C: drive, then the simplest thing to do would be to go to Oracle VirtualBox and delete the "default" VM, uninstall Docker Toolbox, delete C:\Users\<username>.docker\, and then follow the 3 steps above.

Note: uninstalling and reinstalling Docker Toolbox may not be required. But I haven't tested without it.

To move Docker certificates also, set the DOCKER_CERT_PATH variable to point to the path of the new drive. Thanks to @Nutle for the tip.

You can move .docker directory to another drive and create a junction point to it.

Please note that regular shortcut will not work.

That will modify the %APPDATA%\Docker\settings.json with a line: 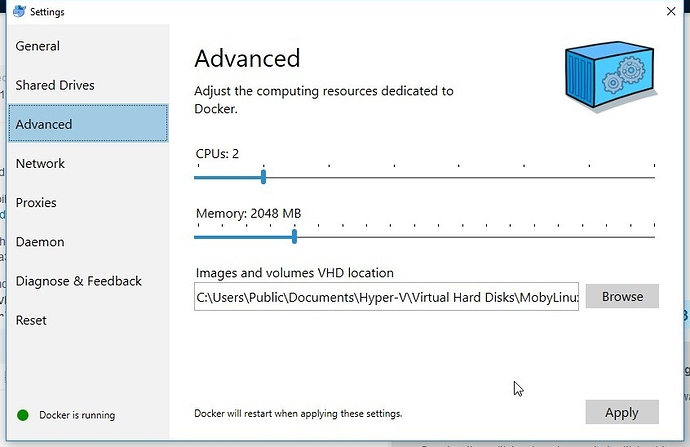 See this thread for more.

Currently 2015 , docker-machine forces the use of %USERPROFILE%:
See libmachine/mcnutils/utils.go#L17-L25

In the meantime, how will users be able to specify where the .docker/machine/* files are stored?

you can by specifying --storage-path on the command line or using the environment variable MACHINE_STORAGE_PATH.

Joost Den Boer points out in the comments

Just tried '-s <path>' on a Mac and it seems to work fine.
What might not be obvious is that the path option goes before the command.
Running "docker-machine -s /Volumes/other/location' create --driver=virtualbox" created a new VirtualBox image at the other location.

Simply use the VirtualBox graphic interface to relocate the file disk.vmdk: 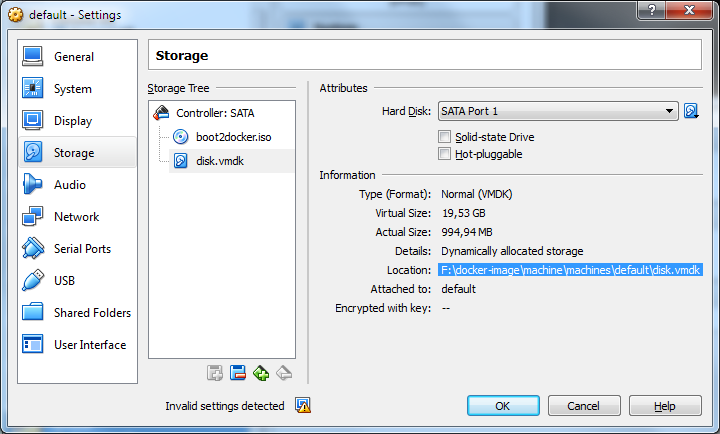 I suppose that your new location is "D:\docker" and your new machine name is "docker1"

This should create a new machine with specified name in your new location.

I could not get the MACHINE_STORAGE_PATH environment variable method working. It kept complaining about missing certificates when first initialising the machine. Still on Windows 7 so have to use docker-toolbox.

I got around the issue by:

I have had a bit of trouble with any of the solutions above but this is what worked for me:

This answer is for people using Docker Toolbox (Windows 10 Home Build 1909, You can follow below steps for docker installation and then location change. I am not adding any images)

Install Docker Toolkit and VM must be installed with Admin Privileges after the installation of docker toolkit (*because Docker Toolkit also installs VM but it's of lower version and creates a problem with other iso files, u can uncheck also, in that case, *). Now we have to change the location of disk.vmdk and update the new location in VM.

Changing the Location where Images will be downloaded

I have written a very descriptive answer starting from installation because I did face some issues and so wanted to make it highly straight forward for the others.
You can delete your disk.vmdk disk (older one) from your C drive if you want to

Create file called c:\programdata\docker\config\daemon.json with content below where e:\images is location where do you want to store all you images etc. restart docker.

These answers are out of date, as of the latest release. The location is configurable in the Settings user interface.

I found lots of these answers were out of data, at least they did not work in my environment: win10 PRO, docker desktop community 2.0.0.3. Finally, I resolved this problem by this method:

I use windows 10 and Docker desktop (community) Version 2.0.0.0, I want to move vhdx file to another Drive. 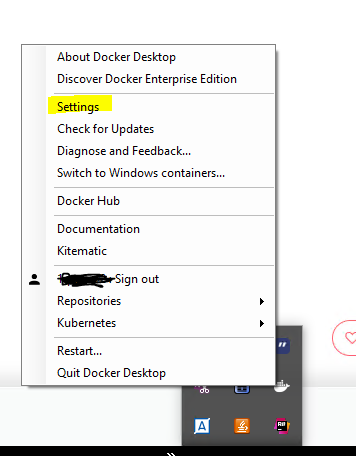 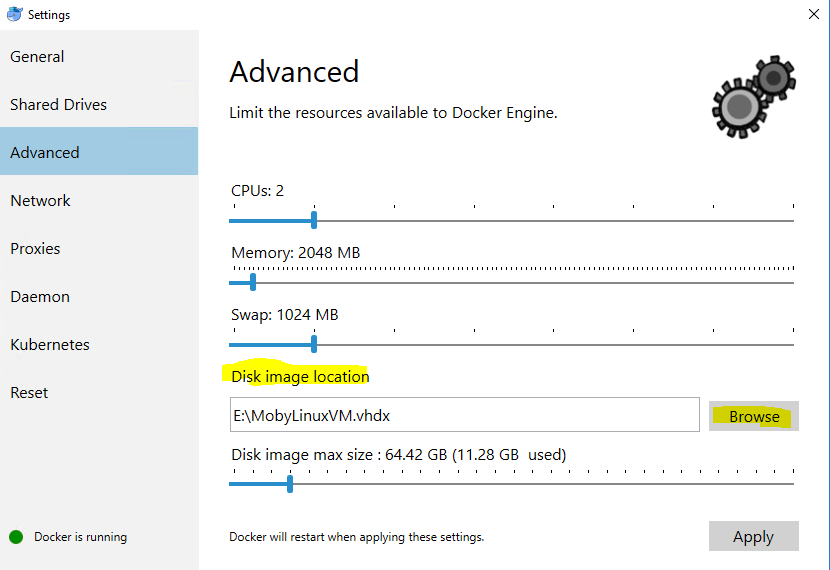 just change the path to new destination, the whole process was smooth and fast for me - it's automatically copy the vhdx file from original path to new path restart docker and all work as expected

Not the answer you're looking for? Browse other questions tagged windows docker docker-machine docker-toolbox or ask your own question.