How can I prevent overlapping in a family tree generator?

The requirements for mine (based on familyecho.com) are:

The problem I'm encountering is: I'm generating the offsets based on the "current" node/family member and when I go past the first generation with say, 2 parents, it overlaps.

Example of the overlap as well as partner not being drawn on the same X axis: 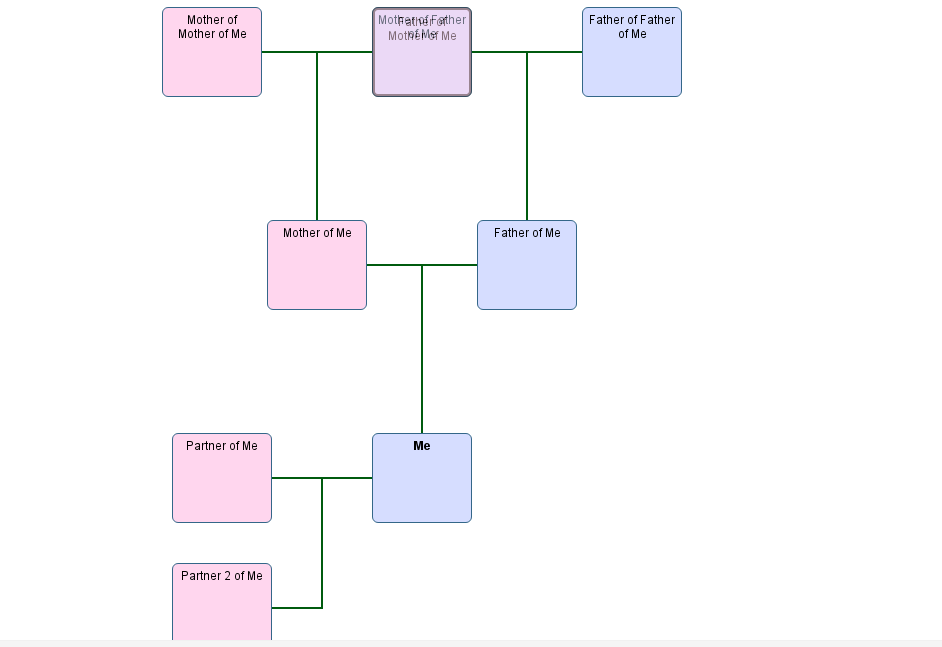 Here is the actual app and main js file where I'm having the issue. And here is a simplified jsfiddle I created that demonstrates the parent/offset issue though I really have to solve overlapping for this in general, in addition to making sure partners are drawn on the same x axis as other partners.

How can I go about solving this and possible future overlapping conflicts? Do I need some sort of redraw function that detects collisions and adjusts the offsets of each block upon detecting? I'm trying to make it seamless so there's a limited amount of redrawing done.

An example of calculating offset relative to the "context" or current node:

I'm going to give a complicated answer, and that's because this situation is more complicated than you seem aware of. Graph layout algorithms are an active field of research. It's easy to attempt a simpler-than-general algorithm and then have it fail in spectacular ways when you make unwarranted, and usually hidden, assumptions.

In general, genetic inheritance graphs are not planar (see Planar Graphs on Wikipedia). Although uncommon, it certainly happens that all the ancestral relationships are not filled by unique people. This happens, for example, when second cousins have children.

Another non-planar situation can occur in the situation of children from non-monogamous parents. The very simplest example is two men and two women, each pairing with children (thus at least four). You can't lay out even the four parent pairs in one rank without curved lines.

These are only examples. I'm sure you'll discover more as you work on your algorithm. The real lesson here is to explicitly model the class of relationship your algorithm is able to lay out and to have verification code in the algorithm to detect when the data doesn't meet these requirements.

The question you are actually asking, though, is far more basic. You're having basic difficulties because you need to be using a depth-first traversal of the graph. This is the (easiest) full version of what it means to lay out "from the top down" (in one of the comments). This is only one of many algorithms for tree traversal.

You're laying out a directed graph with (at least) implicit notion of rank. The subject is rank 0; parents are rank 1; grandparents at rank 2. (Apropos the warnings above, ranking is not always unique.) Most of the area of such graphs is in the ancestry. If you don't lay out the leaf nodes first, you don't have any hope of succeeding. The idea is that you lay out nodes with the highest rank first, progressively incorporating lower-ranked nodes. Depth-first traversal is the most common way of doing this.

Since you are already using Family Echo, I'd suggest you look at how they develop their online family tree diagram, since they seem to have solved your problem.

When I enter your sample diagram into Family Echo, I can build a nice looking tree that seems to be what you are looking for with no cross over. 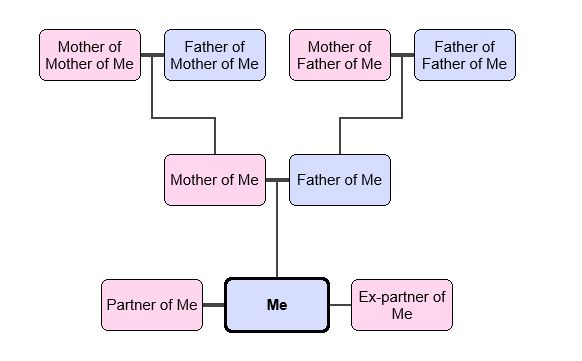 Although they are creating their diagrams with html and css, you can add the people to their diagrams one by one and then inspect where the boxes are being placed in terms of the left and top pixel locations of each element.

If I had more expertise in JavaScript, I would have tried building up some code to replicate some of what Family Echo is doing, but I'm afraid that's not my mojo.

you'll have to adjust all the branches off the node that you affect, each branch will have to recalculate the position of its nodes, and each node will have to be recalculated locally reaching the leaves.You calculated once the leaves are going to have to recalculate all the way to backing up, all that recursively. It's like a real tree, when you add physically branch to trunk ... the other branches move alone to leave some space, all sheets are automatically reset, so you have to imagine. And simulate this process in your diagram. Processes each branch reaches each leaf, and recalculates up to recompute the modified node neighbors. (one level above you started) That is not easy or single job to do.

Not the answer you're looking for? Browse other questions tagged javascript charts jsplumb family-tree genealogy or ask your own question.