I'm currently working on a JavaScript project which involves 3D point rotation. Using simple trigonometry, I have sketched my own 3D point rotation algorithm, but I have to deal with a huge amount of data (+300 000 points) and my function slows down the runtime substantially (the FPS rate drops from 60 to 12).

I'm looking for another 3D point rotation ALGORITHM which...

Any help will be greatly appreciated :)

Context: 3D point cloud renderer (I want every point to be rotated)

A rotated vector can be described as a product of a rotation matrix with that vector. The German Wikipedia page on pitch, roll and yaw describes the rotation matrix for given Euler rotation angles.

With that information, the rotation of all points with the same angles can be written as JavaScript function, where the points array is global:

Most of that is setting up the rotation matrix as described in the article. The last three lines inside the loop are the matrix multiplication. You have made a point of not wanting to get into matrices, but that's hardly intimidating, is it? Sooner or later you will encounter more matrices and you should be prepared to deal with them. The stuff you need – multiplication, mainly – is simple. The more complicated stuff like inverting matrices is not needed for your requirements. 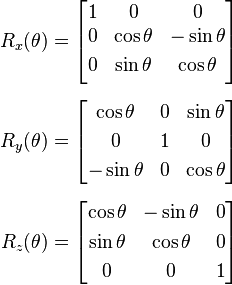 If you multiply your points by each of these matrices they will be rotated by the amount you want.

Not the answer you're looking for? Browse other questions tagged javascript algorithm 3d rotation or ask your own question.

0
Rotate 3D shape around its centeroid/axis
1
How would I simulate camera rotation in 3D space by rotating all the points around the position of the camera?
0
Applying a rotation matrix on a point with an origin fails
0
How to rotate a plane in 3d dimensions represented as 1d array in vanilla js

1522
What is the best algorithm for overriding GetHashCode?
1418
Activity restart on rotation Android
12
Calculate rotations to look at a 3D point?
1150
Ukkonen's suffix tree algorithm in plain English
1738
Image Processing: Algorithm Improvement for 'Coca-Cola Can' Recognition
1965
What is the optimal algorithm for the game 2048?