I don't know if this is a general problem with Office 2016, or if it is specific to Windows 10 users, but I find that sizable MDI forms in Access 2016 have a single-pixel border that is very hard to grab with the mouse.

The form borders show as a single-pixel red line, and have no difference in appearance regardless of the mode of the form, whether the mode is "no border", "dialog", "sizable" or "thin". The border appears the same in design mode, as in the example below.

I have to assume that the problem is related to the way that form borders are handled in Windows 10, where the drop-shadow forms part of the draggable area.

Is there any way around this? 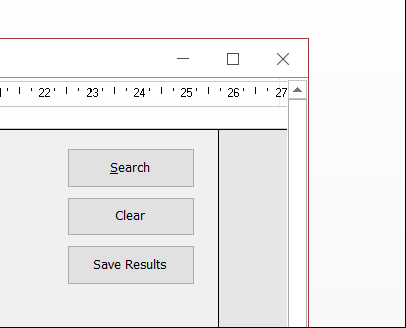 Yes and it's a P.I.T.A. The 2 workarounds I've been using are, 1. 'slide' the mouse along the border you want while vigilantly watching for the curser to change and then go mouse button click. 2. use TAB to cycle through the graphic object then right-click to operate on it (align, size, position).

This tip I have found on the Internet and tried it.

Still no solution for the fore mentioned primary question though.

Not the answer you're looking for? Browse other questions tagged ms-access ms-office windows-10 office-2016 or ask your own question.