CloudFront + S3 Website: “The specified key does not exist” when an implicit index document should be displayed

I've just deployed a static website to Amazon S3, which can currently be viewed here: http://www.rdegges.com.s3-website-us-east-1.amazonaws.com/

If you click any of the article links, you'll notice the following error: 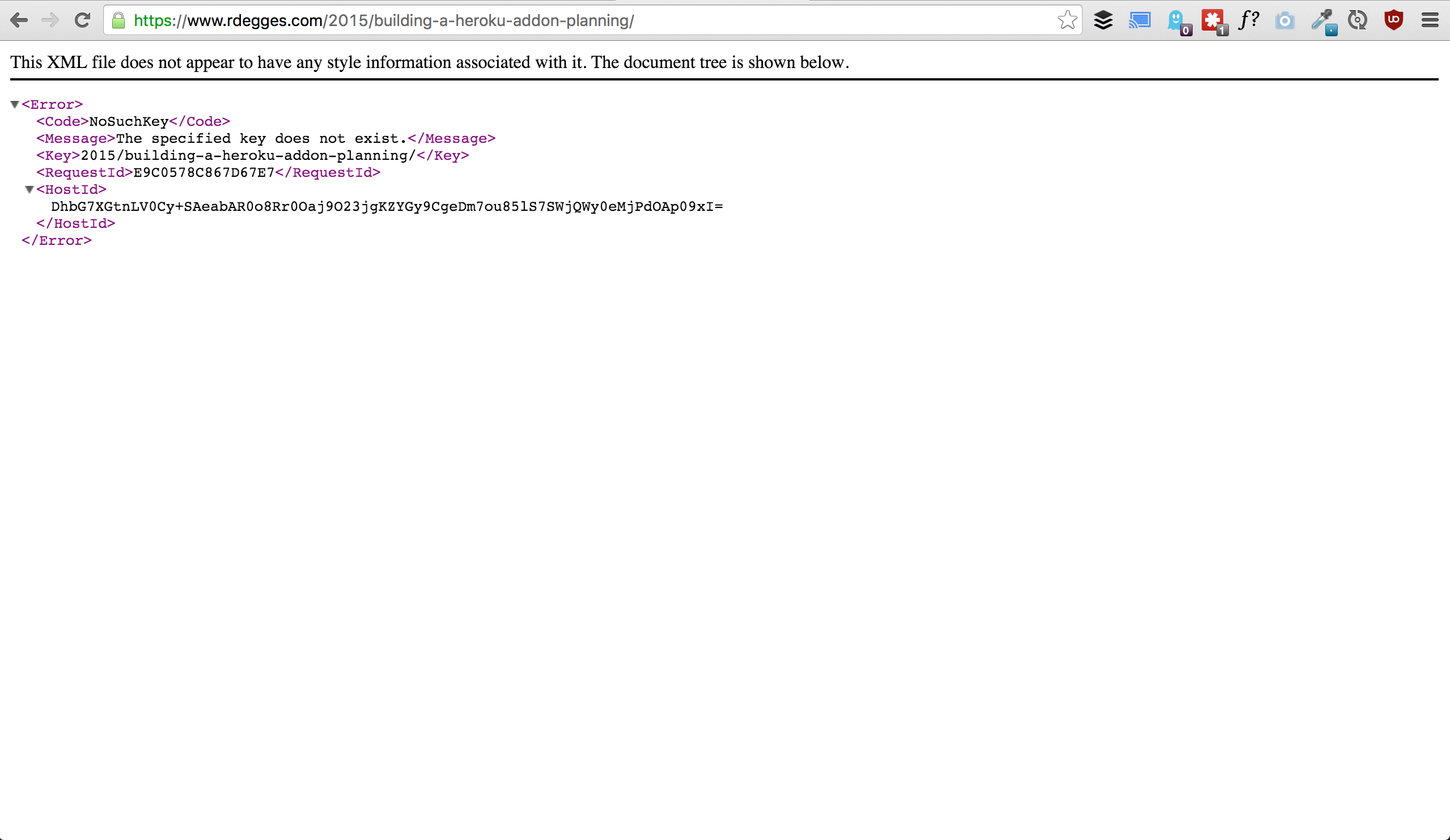 S3 is complaining the file doesn't exist. Now, here's what's weird about this -- I'm using CloudFront on my domain. So when you click that article link, it's sending the request to CloudFront which then tries to fetch the file back from the S3 bucket.

However, if you visit that same URL from S3 directly, eg: http://www.rdegges.com.s3-website-us-east-1.amazonaws.com/2015/building-a-heroku-addon-planning/ the page will load just fine.

It appears that something is getting lost in translation here.

Anyone got a suggestion of what I can do to fix my settings?

I'll go out on a limb and say that the specified key doesn't technically exist, so the error message is technically accurate but doesn't tell the whole story. This should be an easy fix.

S3 buckets have two¹ endpoints, "REST" and "website." They have two different feature sets. The web site endpoint provides magical resolution of index documents (e.g. index.html, which appears to be what is actually supposed to be returned to the browser in the example you provided) while the REST endpoints don't.

When you configure CloudFront in front of a bucket used for web site hosting, you usually don't want to configure the origin as an "S3" origin by selecting the bucket name from the drop-down list; instead, you want to configure it as a "Custom" origin, and use the web site endpoint hostname as provided in the S3 console (e.g. example-bucket.s3-website-us-east-1...) because otherwise, CloudFront assumes you want it to use the REST endpoint for the bucket (which allows authentication and private content, which the web site endpoint doesn't).

Do not select the name of your bucket from the list, for example, example.com.s3.amazonaws.com.

The documentation was refactored since this question was originally answered, so the message shown above now appears one page later, and has been reworded, but the gist is the same. The "name of the bucket" seems to refer to the choices shown in the drop-down, which is not what you want.

Be sure to specify the static website hosting endpoint, not the name of the bucket.

Create a new origin for the CloudFront distribution, as described, then change the behavior to send requests to the new origin, then send a CloudFront cache invalidation request for /* and you should be set.

¹ two endpoints. Technically, there are more than two, since all buckets have at least two possible REST endpoint hostnames... but there are two types of endpoints. Buckets also have an optional transfer acceleration endpoint that uses the AWS edge network (the same infrastructure that powers CloudFront) for faster/optimized transfers, particularly from geographic locations more distant from the region where the bucket is provisioned, but without using the CloudFront cache. This endpoint looks like https://example-bucket.s3-accelerate.amazonaws.com if you activate it, and carries an additional usage charge for most requests since you are using more of the AWS network and less of the public Internet... but, that is a difference in the behind-the-scenes deployment of the endpoint, not the behavior of the endpoint. The transfer acceleration endpoint is still a REST endpoint, so just like the other REST endpoints, it does not have the web site hosting features. CloudFront won't let you use an acceleration endpoint for an origin domain name, because that wouldn't make sense -- if such a configuration were allowed, requests and responses would loop through the AWS Edge Network twice and increase both latency and costs without providing any benefit.

Encountered same issue and how how I resolved it was in CloudFront Origin Settings set Origin Domain Name to <website bucket>.s3-website-us-west-2.amazonaws.com

In CloudFront Generate Settings make sure to have index.html as Default Root Object.

In S3 make sure to have Use this bucket to host a website selected and set index.html as Index document.

This step has solved my issue.

See AWS docs on how to use CloudFront to serve a static website hosted on S3 over https.

Transcribing content below for convenience (or in case the link ever goes bad).

I was facing the same issue, how I solved it, below are the steps

There are a few requirements to get s3 websites working with Cloudfront:

The main issue I had was, there are two types of s3 buckets urls:

In my case I needed to use the website url not the REST url:

Using the website url will allow you to use the Website hosting features of S3 such as the index/error documents and redirect rules!

To verify if your bucket policy allows the OAI, open your S3 bucket in the Amazon S3 console. Then, choose the Permissions tab and review the bucket policy. The following is an example allow statement for an OAI:

I had this problem when I was trying to include the bucket name in my route53 redirect for a customer, to make it easier e.g:

Clicking on "All buckets" and going back into the clients bucket / or removing the bucket from the url did the trick, I can now download and open the files.

Not the answer you're looking for? Browse other questions tagged amazon-web-services amazon-s3 amazon-cloudfront or ask your own question.