How can I get a proper syntax highlighting in Visual Studio 2015 for JSX with ES2015 code? 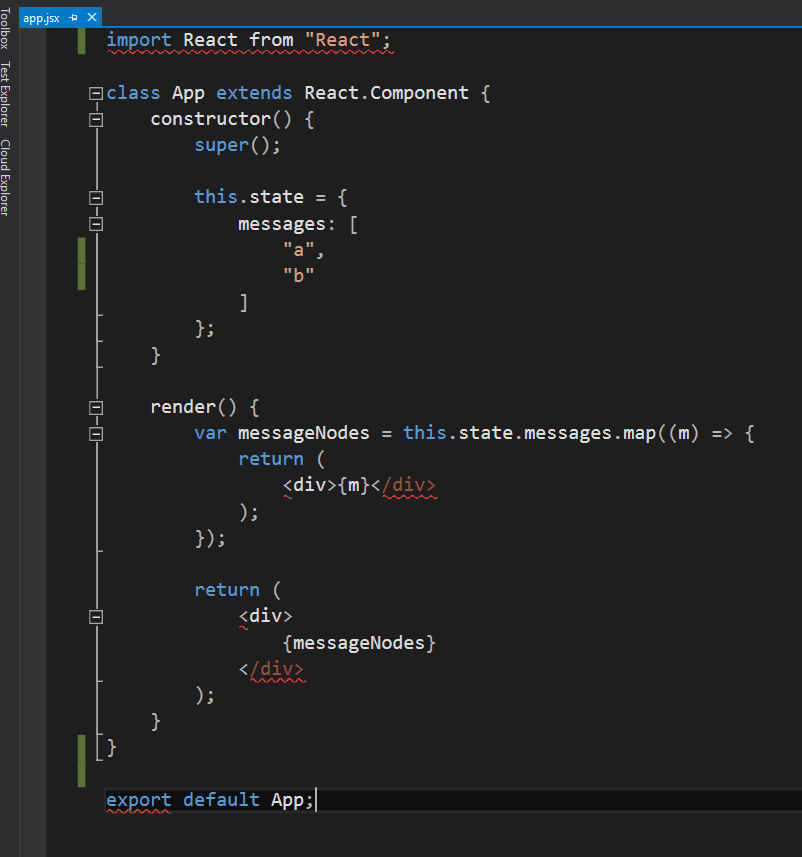 It works fine if I remove the import and export keywords: 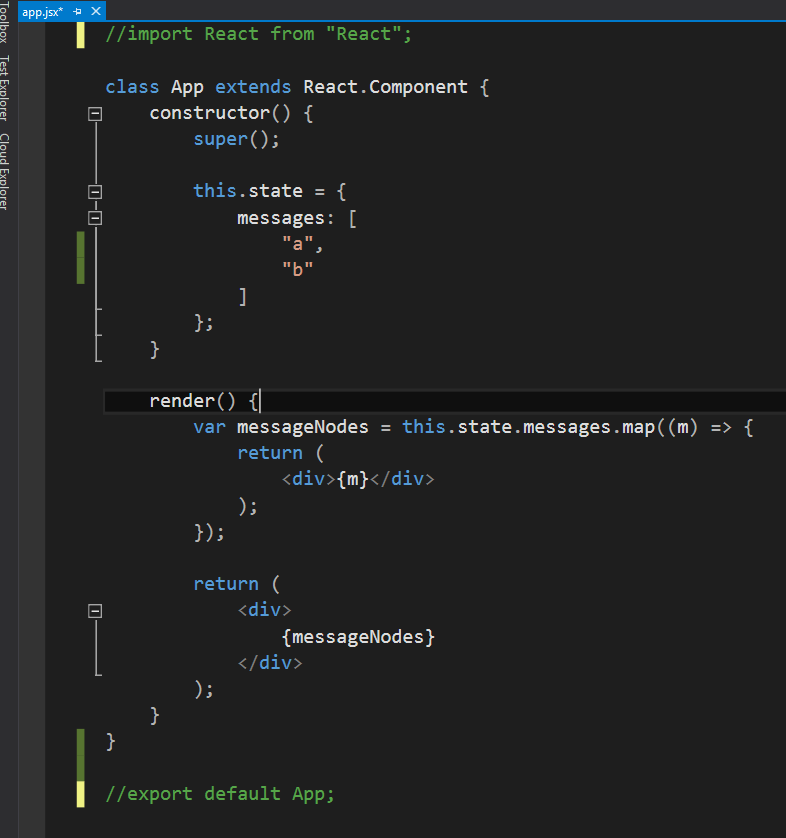 I just updated to Visual Studio 2015 Enterprise Update 1 but it still remains the same.

Node Tools for Visual Studio (NTVS) has been using the Salsa analysis engine since v1.2 and using NTVS is likely the path of least resistance for JSX support.

I ran into the same issue and found two solutions - one using ReSharper and one modifying Visual Studio external web tools.

After reloading the solution, the red squigglies were gone for me. However, the syntax highlighting for JSX doesn't work. The opening segment of any elements I declare in the render function don't have the proper coloring - but that's easy for me to ignore.

I should also mention that the javascript files need to have .js extension. If you give them .jsx extension, you'll get red squigglies on your first import statement. The error message will be JSX Parser: illegal import declaration. (This can be fixed using solution #2 below)

UPDATE: thanks to @SntsDev for this workaround There is a way to avoid naming the .jsx files as .js:

Curiosity got the better of me and I wanted to explore whether or not there was a non-ReSharper solution. Visual Studio uses a locally running node server module named react-server to parse JSX on the fly. This module can be found here:

UPDATE for Visual Studio 2015 Update 3 Thanks to @TheQuickBrownFox for the comment/update. For Update 3, the location of the react-server commands is now in this file:

Further examining the server.js or react-commands.js file from the aforementioned folder(s), there is a function named transformJsxFromPost or transformJsx. This method contains the following line: var transformed = reactTools.transformWithDetails(code, { elementMap: true });. This is a reference to the react-tools module (https://www.npmjs.com/package/react-tools), which has more options available for parsing ES6.

In VS2015 Update-3 and NTVS 1.2 installed, simply setting TypeScript Editor as the default editor for file extension jsx did the trick for me. 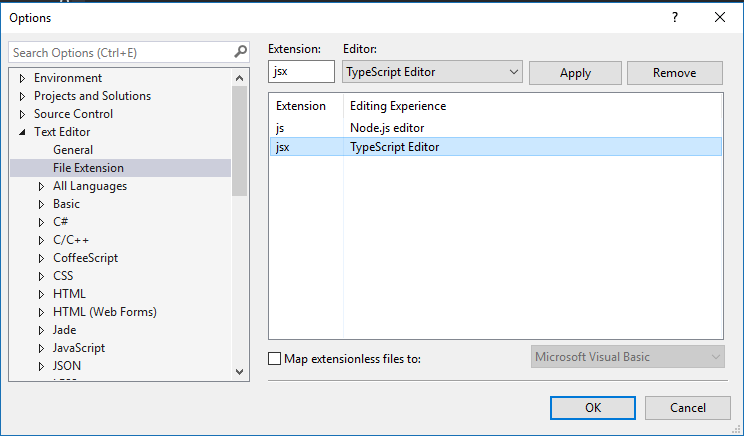 EDIT: Visuals studio 15 is renamed to Visual Studio 2017: you can get the RC over here: https://www.visualstudio.com/vs/visual-studio-2017-rc/

Visual Studio "15" Preview 2 support JSX en React out of the box. You can enable the same (Salsa) Javascript Service library like VS Code.

Thanks to the insights from Adam in his answer, I have got this working with babel and it's plugins/presets. It's worth reading his answer first if you are trying this.

You need nodeJs and npm installed before you go any further, and maybe back up any files before you modify them.

I am using react, es2015 plugins with stage1 presets here, but you can use whatever plugins you like

Notes
Give the parser a chance to kick in after you start, visual studio will do the following when you load into a .jsx file the first time:

I had to turn off javascript intellisense for jsx files as Adam shows in solution 1 in his answer:

With javascript intellisense off, both react-server as packaged with vs and babel as i am replacing it here both only return the first error they encounter, so you shouldn't expect to see highlighting on all errors throughout your file, but they do show up as you type if you keep your code error free.

I guess now all is left to do is get the elementMappings over properly - solution 4 maybe? :-)

Whilst trying to research this I realised a simple way to work with jsx files in all versions of Visual Studio. It's not perfect but works for me.

Hope that helps people worrying about having to upgrade.

It is mentioned in the comments above by @TheQuickBrownFox, but hidden by default (needed to expand all to see it), so summarizing what I did to fix the issue in the latest Visual Studio 2015 Community Update 3:

restart VS and you're done.

Not the answer you're looking for? Browse other questions tagged visual-studio-2015 intellisense ecmascript-6 react-jsx or ask your own question.