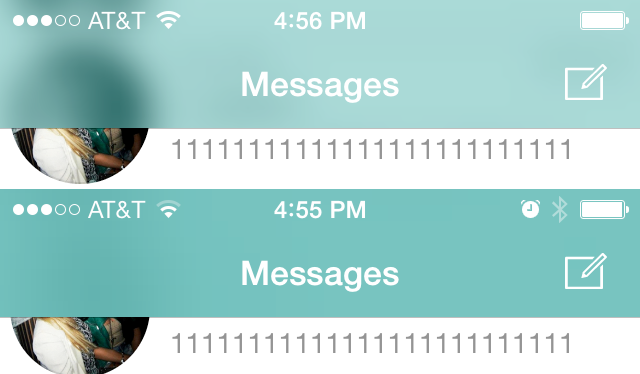 But I can't get this done. I've tried several methods, some of them are below:

Those lines in AppDelegate main method:

But still can't get this to work. I'm running the app on XCode simulators, using iOS 8.1 and 9.0

What I am doing wrong?

A translucent bar mixes its barTintColor with gray before combining it with a system-defined alpha value to produce the final background color that is used to composite the bar with the content it overlies.

The only description of the blur effect appears to be the following:

Navigation bars are translucent by default in iOS 7. Additionally, there is a system blur applied to all navigation bars.

You can change the transparency of the bar by using UIImage.imageWithColor: to make a background image for the bar from a UIColor with an appropriate alpha value, but doing so will remove the blur effect. There is no documented way to alter the "system-defined alpha value" to increase the translucency of the bar without removing the "system blur".

If you want to imitate the old translucency and blurring effects on iOS 8.1 and 9.0, you'll need to make your own subclass of UINavigationBar and insert one or more subviews such as a UIView with a background color that uses an appropriate alpha value (for transparency) and/or a UIVisualEffectView (for the blur effect).

You might be able to find a combined view in one of the answers to this question.

Not the answer you're looking for? Browse other questions tagged ios swift cocoa navigation or ask your own question.

219
How can I produce an effect similar to the iOS 7 blur view?
8
Blurring effect disappeared on iOS 7.1
6
How to consolidating the translucency of the navigation bar between iPhone 5S and 5?

317
How to hide 'Back' button on navigation bar on iPhone?
386
iPhone hide Navigation Bar only on first page
1005
How to change Status Bar text color in iOS
60
Content pushed down in a UIPageViewController with UINavigationController
251
Changing navigation bar color in Swift
3
Xcode - Colours look different but should be the same
0
Transclucent navigation bar moving section header
1
Blurred overlay does not cover entire screen