Django and Node – how does it work? [closed]

In order to make an web application with RESTful capabilities I have read and watched tons of articles and videos and I still do not get a complete picture of how it works. And which I should chose. Every other answer is the not helpful ”it depends”. I have boiled it down to a first choice between Django and Node. But nowhere I find the whole ”picture” of how the pieces works together and which modules are needed. Therefore I have tried to put all into a rough illustration. Note that I am a complete newbie on this.

I develop an ERP application with accounting modules. Basically it is mainly about CRUD besides viewing diagrams, printing and storing documents. So this is the ”it depends”

The only thing I have managed to make decisions about is to use nginx, Postgresql and Debian 8 as tools/os. These are the fixed stars.

My questions are not really the common Django vs Node.js and it is not just an opinion I want: 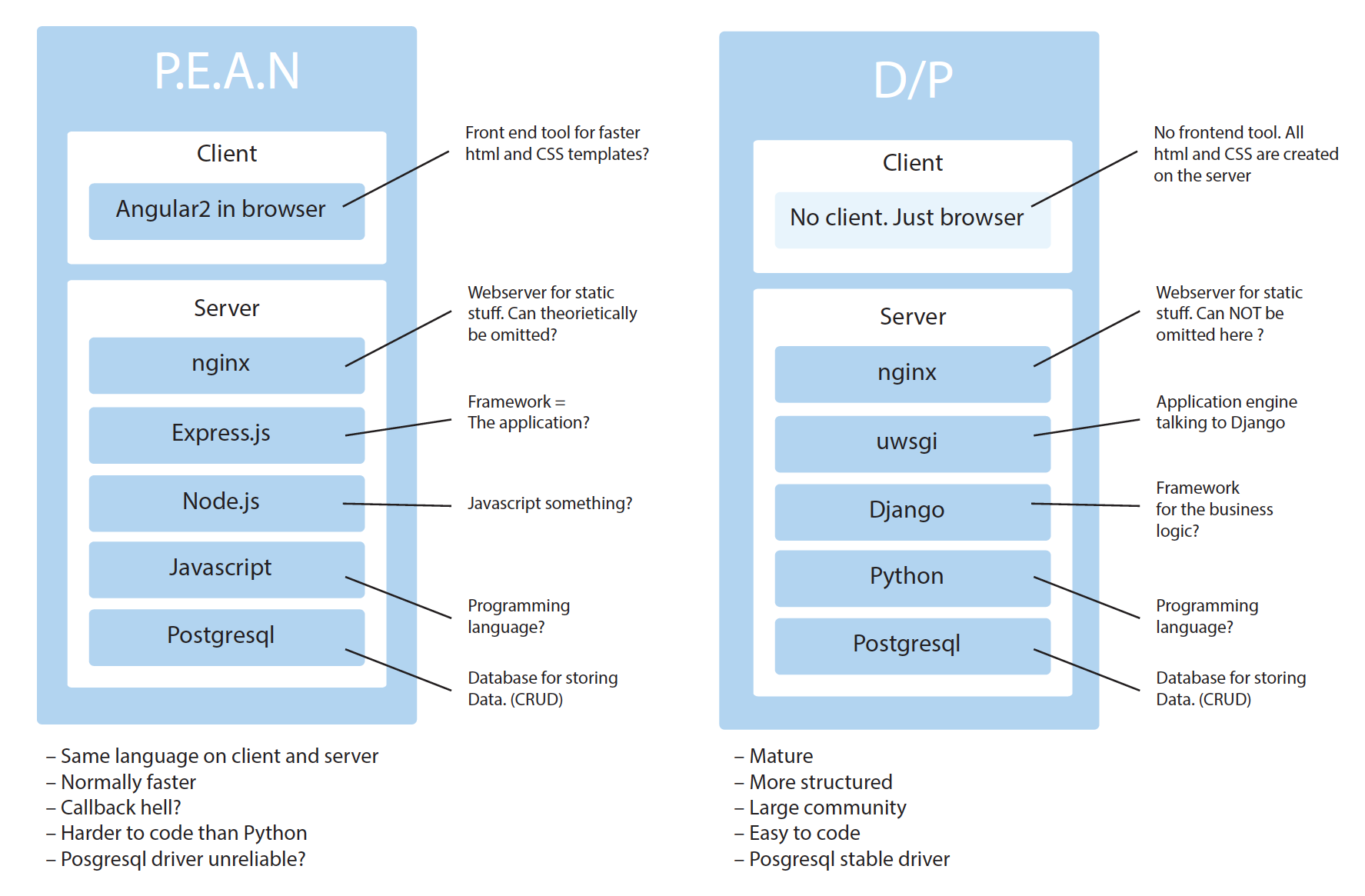 You have a lot of questions - and on StackOverflow there should be one question that can be answered without generating a lot of debate or have opinions rather than facts.

As such, I think your question might be closed as "too broad"; however I think it deserves an answer.

I am not going to say "it depends", although that's really all it boils down to - but here is my attempt to explain it.

nodejs is a runtime. It is an environment which allows you to develop code on the server using javascript. In order to do anything useful with nodejs, beyond "hello world"; you'll need to use a framework, and there are tons of those around and various stacks have been developed by the community to tie in all the components together. An example of such a stack is MEAN, which is MongoDB for the database, Express for the framework, Angular to assist with the front-end, and Node to run it all.

django is a framework - it is not a runtime. This means that it is one step removed from the node world. The runtime for django is Python. django also is not a "stack" like MEAN, you can develop your own stack on top of it - but since django is a "batteries included" framework, you only really need to add a database to it - it includes everything else you need.

REST is just a way of designing web-services. Its not a language, or a platform or a library. Its a set of rules that describe a way to design APIs such that they take advantage of the semantic verbs of HTTP.

You can use any library and programming language to develop a RESTful service. All you really need is two things [a] a library to communicate over HTTP [b] a way to serialize data, preferably in JSON (but even that's not a requirement).

nginx is just a very fast webserver and a reverse proxy. The reason it is mentioned often - is because it is very expensive for a framework to serve static media. All requests to a framework (either in django world, or in nodejs world) have to go through a large chain of components that help decode the HTTP request and create a data structure that is easy for developers to use. This chain of components is often called middleware. Since each and every request has to go through this middleware, it is better for performance reasons that requests that don't need the "power" of the application to execute (like a request for an image, a stylesheet, a video file) be handled by something else. This is what nginx is used for, since its a very fast webserver.

Now that those are explained, you need to see what stack works best for your application. To do that, you need to know a bit about the philosophy/justification or problem that each stack is trying to solve.

For django - this is easy. Django was created by a team working on multiple newspapers to help them manage content that was published on different sites. As such, it is designed so that the management of content is of primary concern. That is why it has a very robust administration console as a standard component; and a built-in quite robust ORM and its own templating engine. Django leaves it up to you to figure out how best to actually run and deploy it; although they do provide a lot of suggestions and examples - but in the end, its upto you to decide which database to use, which web server to use, and how to deploy the application.

In the nodejs world - the primary focus is nonblocking I/O and speed of response. Nodejs excels at being able to serve a lot of simultaneous requests on limited resources. Therefore, it provides you a very powerful foundation to develop applications that need to quickly respond to requests ... and that's it. When you program in node or any other specialized lower-level library, you need to make sure your code is taking complete advantage of the library. So, if you start writing blocking code in node, you'll find that the performance that you expect hasn't been achieved.

nodejs doesn't care what the application actually does. Think of it like a very fast, very powerful tool. You can build anything with it, but you need to know what the tool is designed to do best in order to know when to use it.

nodejs has you working at a lower level - which is why there are a lot of packages that help you do all sorts of things with node; and multiple ways you can take components and create your own stack - depending on what you are building on top of node. Think of it like Lego building blocks.

nodejs and django are not mutually exclusive. You can utilize both in your application and exploit their strengths and take advantage of what each does best.

As far as your specific questions:

Did I get the picture? Any comments?

Is there any further components that will be needed? To get started?

The answer to this is yes, because you don't want to build everything from scratch. Each stack has its own libraries components for developing services. For django, there is django rest framework (DRF).

There is nothing that is "best" for anything. This question is just asking for opinions. Its like asking, what is the best fruit juice?

Which framework are fastest and most reliable for CRUD using Postgresql

People have developed many robust applications on top of postgresql; however as nodejs is bound to javascript - there is still a lot of work being done in this area.

Can I lock the library (trade secrets) in both environments?

Is there better tools for creating ERP/Accounting?

You cannot combine the two and lump it together.

What is the benefits using Angular on top of Node.js?

The same benefit of using Angular on top of _____ (insert your favorite backend). Angular is just a front end library.

An anecdotal benefit is that both Angular and Node use the same programming language.

Not the answer you're looking for? Browse other questions tagged python django node.js express postgresql-9.1 or ask your own question.

5467
How do I merge two dictionaries in a single expression (taking union of dictionaries)?
6012
How do I check whether a file exists without exceptions?
10935
What does the “yield” keyword do?
4599
How can I safely create a nested directory?
6501
Does Python have a ternary conditional operator?
6629
What does if __name__ == “__main__”: do?
3467
How do I list all files of a directory?
3596
Does Python have a string 'contains' substring method?
1865
How to exit from PostgreSQL command line utility: psql