I've got a dict that has a whole bunch of entries. I'm only interested in a select few of them. Is there an easy way to prune all the other ones out?

Note that this, unlike jnnnnn's version, has stable performance (depends only on number of your_keys) for old_dicts of any size. Both in terms of speed and memory. Since this is a generator expression, it processes one item at a time, and it doesn't looks through all items of old_dict.

The filtering part is the if statement.

This method is slower than delnan's answer if you only want to select a few of very many keys.

You can do that with project function from my funcy library:

Also take a look at select_keys.

All pieced of code performance are measured with timeit using number=1000, and collected 1000 times for each piece of code. 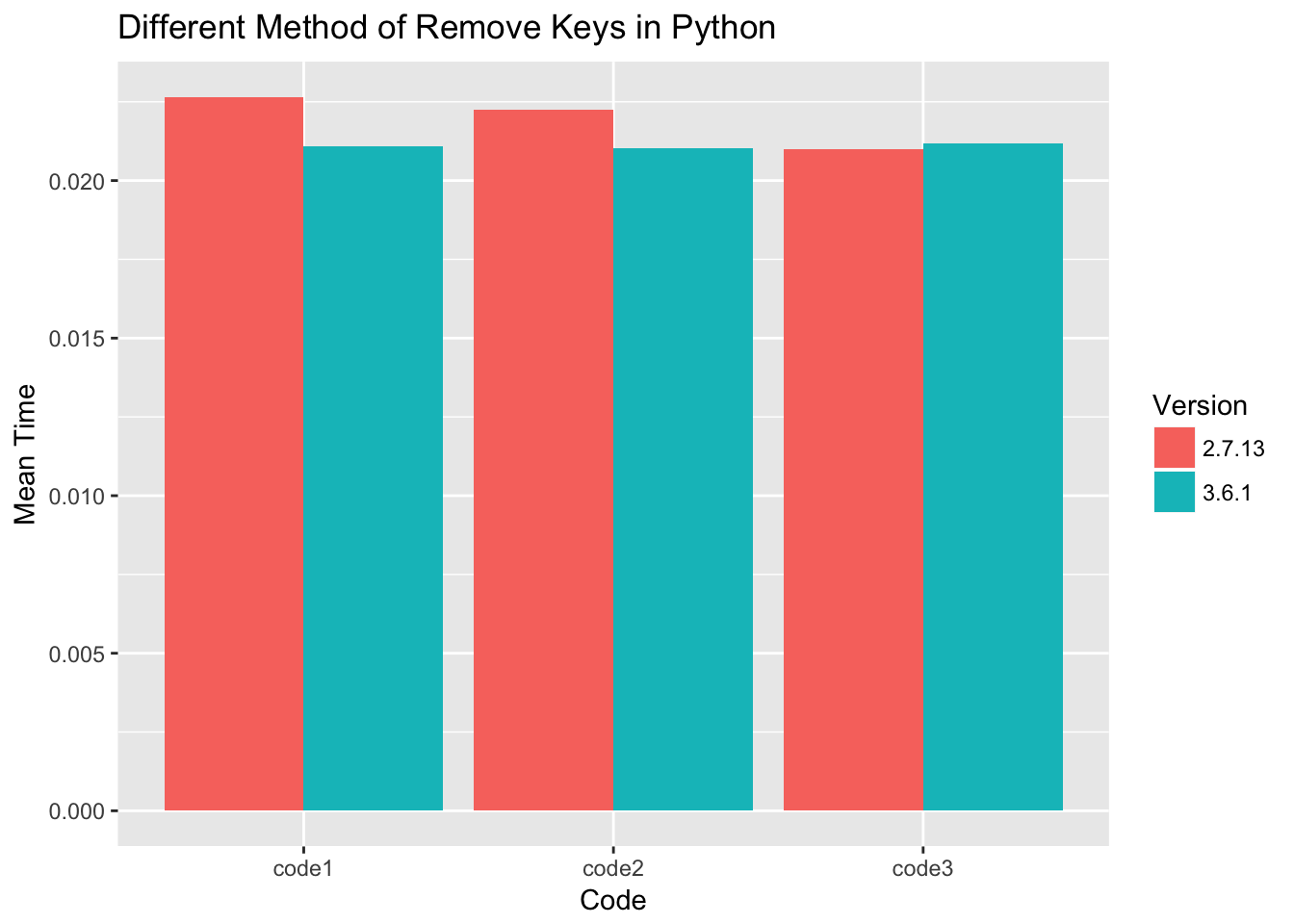 For python 3.6 the performance of three ways of filter dict keys almost the same. For python 2.7 code 3 is slightly faster.

This one liner lambda should work:

It's a basic list comprehension iterating over your dict keys (i in x) and outputs a list of tuple (key,value) pairs if the key lives in your desired key list (y). A dict() wraps the whole thing to output as a dict object.

Given your original dictionary orig and the set of entries that you're interested in keys:

which isn't as nice as delnan's answer, but should work in every Python version of interest. It is, however, fragile to each element of keys existing in your original dictionary.

Based on the accepted answer by delnan.

What if one of your wanted keys aren't in the old_dict? The delnan solution will throw a KeyError exception that you can catch. If that's not what you need maybe you want to:

This function will do the trick:

Just like delnan's version, this one uses dictionary comprehension and has stable performance for large dictionaries (dependent only on the number of keys you permit, and not the total number of keys in the dictionary).

And just like MyGGan's version, this one allows your list of keys to include keys that may not exist in the dictionary.

And as a bonus, here's the inverse, where you can create a dictionary by excluding certain keys in the original:

Note that unlike delnan's version, the operation is not done in place, so the performance is related to the number of keys in the dictionary. However, the advantage of this is that the function will not modify the dictionary provided.

Edit: Added a separate function for excluding certain keys from a dict.

If we want to make a new dictionary with selected keys removed, we can make use of dictionary comprehension
For example:

You could use python-benedict, it's a dict subclass.

It's open-source on GitHub: https://github.com/fabiocaccamo/python-benedict

Disclaimer: I'm the author of this library.

This seems to me the easiest way:

I like doing this to unpack the values too:

As most of the answers suggest in order to maintain the conciseness we have to create a duplicate object be it a list or dict. This one creates a throw-away list but deletes the keys in original dict.

This is my approach, supports nested fields like mongo query.

Here is another simple method using del in one liner:

e_keys is the list of the keys to be excluded. It will update your dict rather than giving you a new one.

If you want a new output dict, then make a copy of the dict before deleting:

We can do simply with lambda function like this:

Not the answer you're looking for? Browse other questions tagged python dictionary or ask your own question.

14
Remove keys from object not in a list in python?
10
How to filter a dict to contain only keys in a given list?
2
Extract sub dictionary from keys that appear in a given list
0
Filter dictionary based on list of keys
1
Python remove a key from dictionary when It's a number
-3
How to take several items from dictionary
-1
Excluding set of words from a listed dictionary?
1
How can I create a new JSON object form another using Python?
0
How to copy dictionairy using list of keys
0
Python iterating through dictionary to get certain values that meet requirements
See more linked questions

2007
Calling a function of a module by using its name (a string)
948
How to sort a list of objects based on an attribute of the objects?
1895
How to leave/exit/deactivate a Python virtualenv
3035
How can I add new keys to a dictionary?
1470
Proper way to declare custom exceptions in modern Python?
1502
How to print to stderr in Python?
792
What is the easiest way to remove all packages installed by pip?
447
How can I get list of values from dict?
331
How to dump a dict to a JSON file?