How to get PAT from on-premise TFS2015

We want to migrate our custom steps from XAML build to new build task in TFS2015 on-premise. I installed NodeJS and tfx-cli but when tfx-cli want to connect to TFS I need to provide pat (personal access token) but I cannot find where I can get it. All samples is for VSO but not for on-premise TFS2015. Is it possible to get PAT from on-premise TFS2015?

TFS 2015 doesn't support Personal Access Tokens, this feature was introduced with TFS 2017. In the mean time you'll either need to configure basic auth and use that (only enable basic auth if your TFS server is running over SSL), Or use the trick below to trick the command lien tools to authenticate by lettign an NTLM proxy (like Fiddler) handle the auth for you.

If you do not want to configure Basic Authentication on your TFS server (which many people don't want due to security concerns), then you can use a neat trick to let Fiddler handle your authentication: 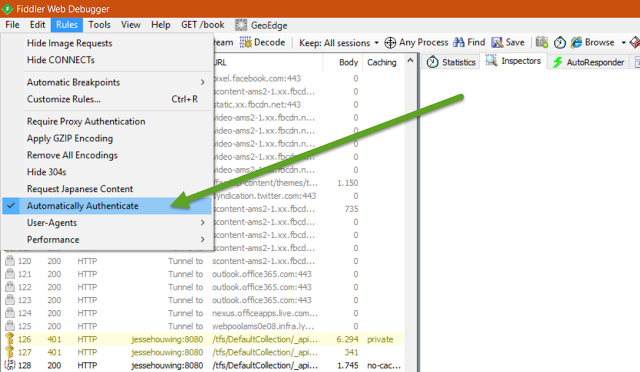 You'll be prompted for a username and a password, it doesn't really matter what you enter, fiddler will handle the authentication for you in the background:

If you're battling self-signed certificates, which is also a common problem when using tfx against a on-premise TFS server, make sure you're using a recent enough version of Node and point it to an aditional cert store using environment variables:

As of Node.js 7.3.0 (and the LTS versions 6.10.0 and 4.8.0) it is now possible to add extra well-known certificates to Node.js with an environment variable. This can be useful in cloud or other deployment environments to add trusted certificates as a matter of policy (as opposed to explicit coding), or on personal machines, for example, to add the CAs for proxy servers. See the CLI documentation for more information on using NODE_EXTRA_CA_CERTS, as well as the original pull-request.

When set, the well known "root" CAs (like VeriSign) will be extended with the extra certificates in file. The file should consist of one or more trusted certificates in PEM format. A message will be emitted (once) with process.emitWarning() if the file is missing or malformed, but any errors are otherwise ignored.

Note that neither the well known nor extra certificates are used when the ca options property is explicitly specified for a TLS or HTTPS client or server.

There's another option for tfx-cli to connect to the TFS instance, and it is basic authentication. Just use the following format:

Here is the quote from Github:

Note: Using this feature will store your login credentials on disk in plain text.

Not the answer you're looking for? Browse other questions tagged tfs tfsbuild tfs-2015 or ask your own question.

23
How to get TFS2015 Build (Build.vnext) and NuGet package restore to use custom package sources
2
TFS2015: How to set two different build definiton to use the same local repository (git)?
2
How to checkin files to TFS in new build task
13
TFS 2015 REST API Authentication
3
How do I get the the expected output from a TFS 2015 build (to match my XAML build)?
2
TFS (on premise) build output shown with wrong character-encoding
11
"The license for Visual Studio has expired." when compiling with Visual Studio from TFS build
0
Using SourceVersion and rev:r in TFS2015 build names
0
Trouble connecting to the TFS2015 server via web api