i use github and have successfully added and synched files on my laptop in the past.

as of recent i started getting "PuTTY Fatal Error: Disconnected: No supported authentication methods available" after running:

after digging around on github i found this morcel:

No supported authentication methods available You should be aware of the environment variable GIT_SSH, which is used by git to find your ssh-speaking client, if ssh doesn’t work for you. The git install may be using plink.exe (via GIT_SSH) to perform the authentication. If so, make sure you have pageant.exe running, and the key you created for github loaded into it. This provides the key to plink.exe; without it, the above error will occur.

not sure what plink.exe or peagant.exe is.. and the fact that ssh git@github.com seems to authenticate correctly makes me wonder what the best solution here is.. i certainly don't want to overcomplicate my setup if not necessary.

You can create a file named ".profile" in your home directory, for me that's C:\Users\[user]

Inside that file, put the following line of code:

This will set the GIT_SSH environment variable to use the ssh client included with git.

The .profile script gets executed when you start your Git Bash command line.

Edit: This is my .profile. It will ask you for your password the first time you start the git command prompt, then will remember it from then on, until you reboot your computer. Very handy so you don't have to keep entering your password each time you want to do something.

Location my vary. On one computer it was in C:\Program Files (x86)\Git\bin\ssh.exe 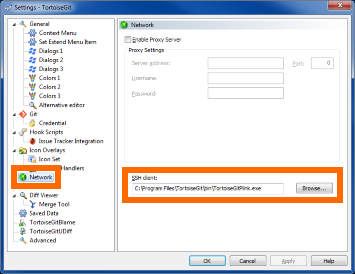 Since you ask: plink & pageant are part of the PuTTY suite, which is an implementation of SSH that supports Linux & Windows and is completely dominant on Windows.

Secure Shell (SSH) is a cryptographic network protocol for securing data communication. It establishes a secure channel over an insecure network in a client-server architecture, connecting an SSH client application with an SSH server. Common applications include remote command-line login, remote command execution, but any network service can be secured with SSH.

if you ever used Telnet, it's like that (but more secure): it allows you to remotely access the bash shell (command line) of a Linux host.

On Windows it's the dominant software for remotely accessing a Linux host's command line under the SSH protocol (above). In Windows, .exe extensions are for executables. So those notes about plink.exe & pageant.exe probably don't apply if you're in Linux. PuTTY includes

Plink: a command-line interface to the PuTTY back ends

Pageant: an SSH authentication agent for PuTTY, PSCP and Plink

So github is hosted on a Linux machine and uses SSH to secure the connection. SSH either authenticates with passwords or keys, many hosts (github?) only authenticate with keys. You setup is apparently trying to authenticate with a key. Keys and hosts are not one-for-one: you can have two keys for the same host and/or two hosts for the same key, so they need to be managed. If you are in Windows, then your SSH session is probably accessed through plink and your keys are probably managed by Pageant.

Import the key you need each time you load Pageant. If you followed guides that said "import your key", and saw that it worked, but it doesn't work now, see Chapter 9: Using Pageant for authentication.

One last tip if you are on Windows: you may have multiple instances of the PuTTY suite installed by various tools. TortoiseGit, for example, installs its own.

I experienced this problem because my GIT_SSH was pointing to the TortoiseSVN version of Plink.exe. I changed it to point to the TortoiseGit version, restarted cmd and it worked.

I prefer to use git with normal cmd.exe (in Console2 of course)

If you're using Pageant and are getting the error described in the question after rebooting your PC (or otherwise closing and reopening Pageant):

The error can be caused by Pageant not having your GitHub SSH key actively loaded. By default, Pageant does NOT automatically load the keys from the previous session when it starts up.

To load the key:

To avoid this problem in the future, you can configure Pageant to automatically load your key when it starts up. (Pageant will automatically prompt you for a password if your key is password-protected.)

Steps to do this (assuming you already have Pageant configured to run when Windows starts):

For TortoiseGit Users on Windows

Originally, I used to setup most of my Github/Bitbucket repositories using the SSH repository URLs as (originally) it used to be the only convenient way to prevent TortoiseGit from prompting for your password on every single action.

But setting TortoiseGit up this way was always hair-pullingly painful. Every time it took me hours to set up correctly, as the default installation options never seemed to work (even as of 2016, sheesh!).

The benefits of HTTPS are:

My issue was that I was attempting to use my github username. Apparently when using Github (or is it a Git thing?), if you use key-based authentication, you need to set your username to git.

I'm not sure why you even need a username at all - perhaps someone more knowledgeable can explain that?

Worked for me on Windows 8: GIT_SSH variable was pointing to plink.exe, Changed it in the system settings to point to the ssh binary, and that has fixed the problem. To find out full path to the ssh, run:

To resolve this issue this was what I did.

I was using Git Bash on Windows 10 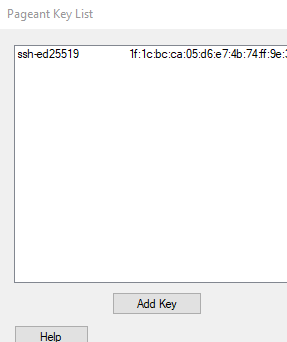 navigated to C:\Users\username\.ssh folder and chose my key

I then attempt to do a git push and it worked this time.

On my Windows 7 machine running Github for Windows using git version 1.8.3.msysgit.0. I found that updating my system environment variable GIT_SSH to C:\Program Files (x86)\Git\bin\ssh.exe seemed to do the trick. This also fixed my issue with contacting OpenShift's git repo.

I had a similar issue after updating GitExtensions to version 3.3.0.7719

Somehow it reverted my authentication settings to use PuTTY instead of OpenSSH.

In that version here is the menu I used to enable OpenSSH again: 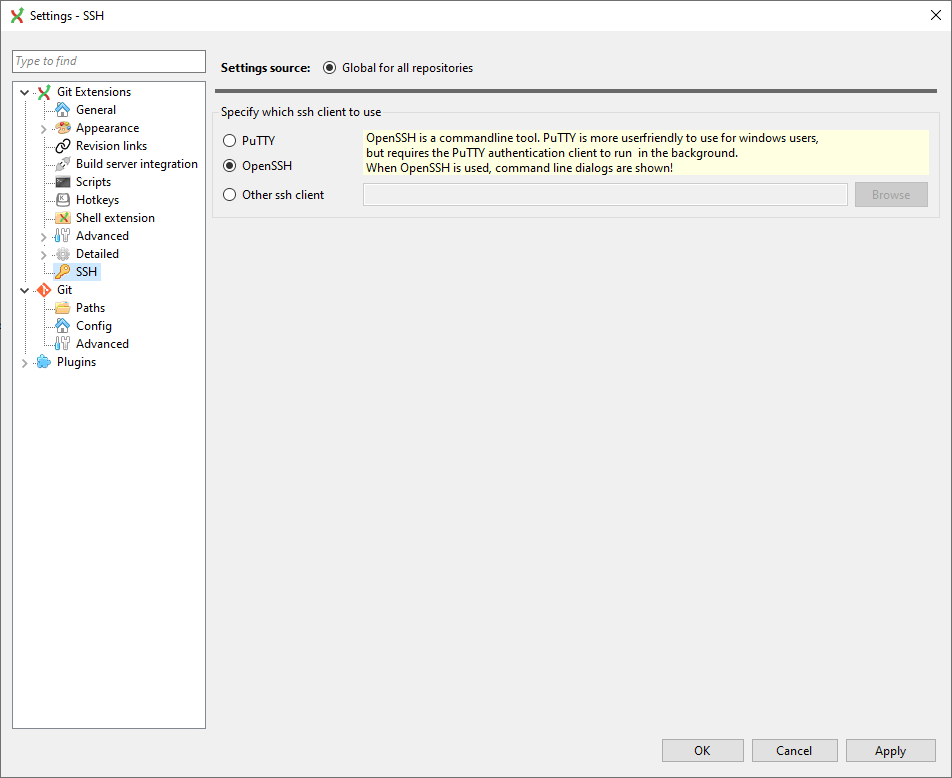 I strongly discourage Windows 10 users to set GIT_SSH to anything else than just ssh string (no extension), to maximise cross operability between Windows Terminal, git bash, cmd, and even PHP Storm. Obviously, your %PATH% will have to have ssh.exe in its way.

I recommend you install Git for Windows, and you add C:\Program Files\Git\usr\bin down your %PATH%

If you ever reinstall Git for Windows, be ready to set it again, and the install will ask you to specify a "plink". Little does it know that "ssh" will work to. That installer will anyway refuse anything else than an absolute path.

May I dare reminding that you obivously should restart your console or IDE after changing GIT_SSH value and/or your path.

This answer relates to solving this issue: "Cannot spawn ssh" when connecting to Github, but ssh -T git@github.com works?

I encountered this same problem, however the GIT_SSH solution appeared to work once for me. After a computer restart I realized it was something else, as I was able to clone my private repositories with no problem using Git Bash or Command Prompt, but not in Sublime Text 3 with the SublimeGit plugin. My solution was simple and is actually what @BlueRaja - Danny Pflughoeft mentioned but I thought it could use some direction ;)

Basically you just need to edit ~/.ssh/config and ensure the username is git. You can also tell it to use a specific SSH key for Github -- My ~/.ssh/config file looks like the following:

I have a specific key for Github due to the number of other things I do throughout my day, but if you've only got one then it usually will be ~/.ssh/id_rsa.pub like Github explains here.

I know everyone has a different solution, but I'll leave this here for anyone who may encounter this article without a fix. Good luck!

I got this error when using TortoiseGit to clone a repository from GitHub. Fixed by clicking "Load Putty Key" and selecting a key file (*.pkk) in the Git clone dialogue.

In Windows 10, if you did a typical installation including Putty, none of the above solutions worked for me, I had to go into the control panel and specifically the system variables, changing GIT_SSH to D:\Program Files\Git\usr\bin\ssh.exe there (it was linking to plink.exe and no amount of modifying .profile or whatever convinced it to change that, only editing the system variables).

You can get plink & pageant from here: http://www.chiark.greenend.org.uk/~sgtatham/putty/download.html

They are PuTTY tools.

I got this problem (direct ssh worked, but git pull failed) due to my git remote not being what I thought it was.

Yes, yes, I know it's a stupid mistake, but it happens and it's worth checking.

Not the answer you're looking for? Browse other questions tagged git ssh github msysgit or ask your own question.

402
SSL certificate rejected trying to access GitHub over HTTPS behind firewall
1669
Download a single folder or directory from a GitHub repo
4456
How do I update or sync a forked repository on GitHub?
953
GitHub Error Message - Permission denied (publickey)
406
Git error: "Host Key Verification Failed" when connecting to remote repository
2907
How to add images to README.md on GitHub?
1091
Git push results in "Authentication Failed"
2023
Could not open a connection to your authentication agent
1304
Create a tag in a GitHub repository