I need to deny all folder permissions for all users, include administrators and others groups via batch file.

I found two topics about this, but i can't solve my problem

How to grant permission to users for a directory using command line in Windows? 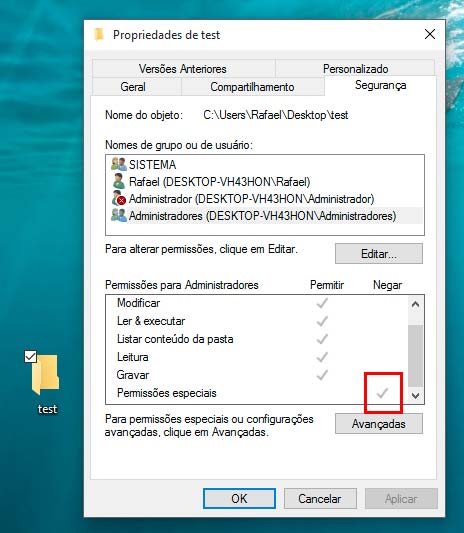 But I need to deny all others permissions like image:

I need to deny all permissions to all all users (administrators, system, and others) via batch, so that nobody can access this folder, not even the system, or the creator of the folder.

I hope I have helped you, This will change the permissions to ALL deny. To undeny it simply do this code

I think you should learn more about NTFS permissions (technically, the Discretionary Access Control Lists (DACL)) before complaining the appearances of the GUI.

The Security tab in files' Properties dialog box have limited control over what permissions you can allow, and what you can deny. You should also ideas about the purposes of the built-in user groups, because specifically, the groups that appear in the GUI are never the only groups your system has (it only shows users or groups that have permission entries applied on the files).

For now, I will assume that you want to deny access to Everyone.

First: simply clicking Deny on Full control on all the users on the list is not enough.

You need to Deny two groups for this: the Everyone group and the Anonymous Logon group. (Because "Everyone" no longer includes anonymous logon since Windows XP)

After everyone is denied, it might be a good idea to remove inherited permission entries as well, since they no longer apply and waste your system a little time processing those entries.

With the guide above, I think you can teach yourself to operate all these on the GUI. The result should look something like this:

If you still have no idea what to do, here is the command-line equivalent (using icacls command - you need Windows Vista SP1 or later because of /inheritance option):

If the names "Everyone" or "Anonymous Logon" don't work for you...

(Yes, it's the same thing, but with SIDs specified in place of user names.)

Not the answer you're looking for? Browse other questions tagged windows batch-file cmd permissions command or ask your own question.

322
How to grant permission to users for a directory using command line in Windows?
3
icacls Deny Everyone Directory Delete Permission

305
Stop and Start a service via batch or cmd file?
852
Windows batch files: .bat vs .cmd?
213
How to request Administrator access inside a batch file
0
How to remove permission to all users for a directory and subdirectory using command line in windows?
310
Android M Permissions: onRequestPermissionsResult() not being called
0
Windows modify permissions in folder - except from specific folders/files
168
Resources, scopes, permissions and policies in keycloak
2
How to deny folder permission to Users with wix installer