How to control one relay with two arduino boards?

So, I got two boards, which both need turn up the light, how should I connect them? I can't use only one board.

If either board can turn the relay on, you can "OR" the two output pins with diodes into the relay. This would also mean that one Arduino cannot turn the relay OFF if the other one is still ON.

Of course, you should use something to drive the relay -- don't hook it directly to the Arduino: 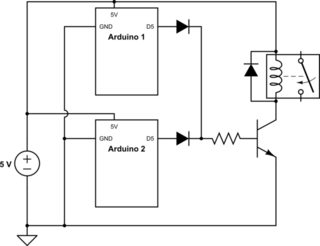 And don't forget the reversed diode across the relay coil. It will supress the spike when you turn the relay off. You don't say what relay you're using, but I am assuming it's mechanical, not an SSR (solid state relay). You wouldn't need that diode if it's an SSR.

Not the answer you're looking for? Browse other questions tagged arduino or ask your own question.

206
How can I unit test Arduino code?
10
How to use an Arduino Uno as an FTDI programmer?
0
How to interface two arduino board readings with a C program?
1
Multiple Arduino Boards using Johnny five
1
Directly connecting two Arduino Yun boards to each other
2
Johnny five and multiple boards - how to recognize which board I am connected to
1
How to sync two Arduino in microsecond
3
Problems with reading analog values with pyfirmata on two Arduino Mega's