I have an MVC Web Application (WebAPI + Angular) deployed to Azure as a Web App (not API App) that is setup to be secured using Settings -> Authentication / Authorization -> AAD -> Express. This created an AD Application with the same name as the Web App, and as a normal web user (in the directory, using OAuth) this works as expected.

But I also have external automation that needs to call the WebAPI controllers directly, so I need to programmatically get a Bearer token to pass along with those requests.

This all works OK when "USER ASSIGNMENT REQUIRED TO ACCESS APP" == NO. But this won't suffice because everyone in the Directory shouldn't have access to this app.

Flipping that switch results in the error:

The code being used:

How can I add a role assignment for an Application?
(as opposed to for a user)

I tried utilizing the 'permissions to other applications' section, but an app cannot be added to itself. To see if this would solve the problem from another app, I went ahead and created one and was able to add the App & set Delegated Permissions to 'Access [App Name]'. But just as before, this only works if user assignment is not required to access the app. Afterwards AcquireToken() throws the same exception.

It seems this issue could be solved by decoupling our API from the Angular app, hosting the API as an API App (with a Gateway), but that's not an option at the moment. Also this article says this new Auth feature "replaces the App Service gateway for most applications" and this blog post announcing the feature in November says "We recommend web and mobile applications use this feature instead of the App Service gateway going forward" so I wonder if this just hasn't made it into the UI & perhaps it's possible to add app role assignments via the app manifest (tried, failed), graph/service-mgmt api, powershell, etc.

In the Azure Portal, configure the following:

In the resource that needs to be accessed, open the manifest ('App Registrations' blade). In the appRoles array, add two roles:

Next, in the client app that needs to access the resource:

To configure the user permissions:

In the Properties section, keep the 'User assignment required?' checkbox enabled. This will restrict access to configured users only.

Now you can access the resource both as a user and as an application.

How can I add a role assignment for an Application? 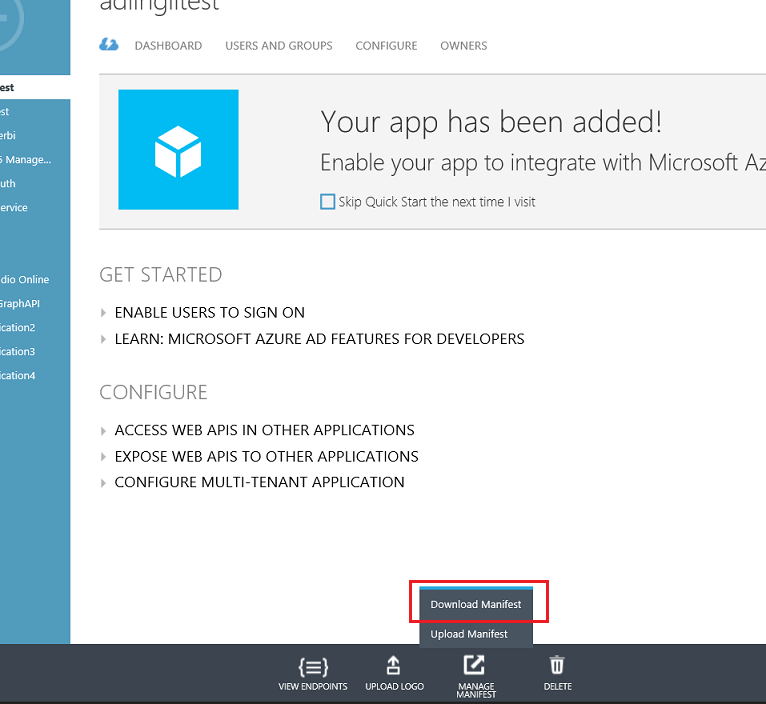 Not the answer you're looking for? Browse other questions tagged c# azure azure-web-sites azure-active-directory or ask your own question.

240
What is the difference between an Azure Web Site and an Azure Web Role
0
Azure Active Directory - how to assign application role to group programmatically
10
Azure AD exception - AADSTS50105 - “The signed in user is not assigned to a role for the application”
6
Azure AD Application not appearing in existing AD App list for an Azure web application
3
Azure Authentication in web API - role claims are missing after validation
4
Supporting the On-Behalf-of flow with managed service identities
3
Azure AD App Authorization with active roles
0
Azure AAD App can access Admin App without granting permission using a token
1
How do i scope a Azure Portal registered app to only have access to a specific calendar in sharepoint, Using MS Graph