Why is the Java compiler giving the incoherent “.class expected” compile error?

If I have a piece of code like this:

When I compile it, Java compiler produces an error

I am not surprised that this code emits an error, but why is the error message '.class' expected?

What is Java compiler trying to say? 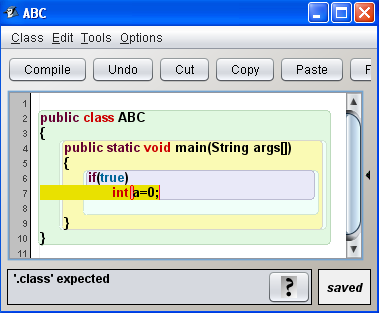 I suspect the problem is that the only token sequence that can legitimately follow the keyword token of int in this case is . followed by class. The declaration statement you've got at the moment isn't valid because a local variable declaration on its own isn't a Statement as per JLS 14. (It's a BlockStatement.)

Note that in the tutorialspoint environment referenced in the comment, if you use a class instead of int, a different error is produced - potentially because the set of valid tokens is different in that scenario. (String.getClass(); would be valid for example, whereas int.getClass(); wouldn't.)

There is a valid question asked in a comment:

Why this .class thing? If you know any situation in which int followed by .class can compile, then please tell me.

And that's easy - you can call a method on the Class reference returned by int.class:

That's not useful code, but it is valid code. It compiles for me without warnings or errors.

As mentioned in comments, more recent compiler versions give more useful errors - I would recommend upgrading.

As opposed to what some commenters say, this code can actually produce that error.

According to the Java Language Specification, a variable declaration needs to be in a code block:

I assume you already knew that.

But why the .class expected error?
The reason why the exception says .class expected, is compiler specific. Other compilers will emit not a statement or illegal start of expression.

would be a valid statement.

So the compiler gives an error that is in some way logical, that is, .class expected.
Other compilers probably evaluate the whole statement as a variable declaration, rather than separate tokens like int, a, = and 0.

Specific compiler
I do not know which specific compiler tutorialspoint.com is using, but their javac version (using javac -version) is javac 1.7.0_75 on Fedora release 21 (Twenty One) (using the command cat /etc/issue.net).

PS: I don't know if you have a specific reason for using the compiler of which you posted an image, but I suggest you start using Eclipse or Netbeans.

Not the answer you're looking for? Browse other questions tagged java if-statement or ask your own question.

1806
Java inner class and static nested class
1509
Why does Java have transient fields?
6962
Why is subtracting these two times (in 1927) giving a strange result?
973
Static Classes In Java
9
Java Compiler error puzzler: “inner classes cannot have static declarations” - except for simple types
1014
What is the difference between canonical name, simple name and class name in Java Class?
191
Missing return statement in a non-void method compiles
1366
Why is executing Java code in comments with certain Unicode characters allowed?
417
Why is (a*b != 0) faster than (a != 0 && b != 0) in Java?