I'm experimenting with more cost effective ways to deploy my Rails apps, and went through the Ruby Starter Projects to get a feel for Google Cloud Platform.

It's almost perfect, and certainly competitive on price, but I can't figure out how to automatically delete old deployed version instances after redeploying.

ie: let's say I have one version of each instance running: 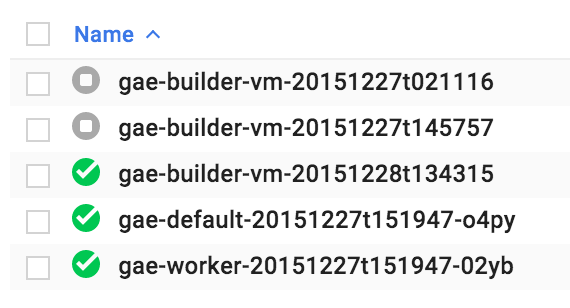 And then I make a change to my app and redeploy with:

So now I have two versions of each instance deployed (as Google switches between them intelligently, I'd assume): 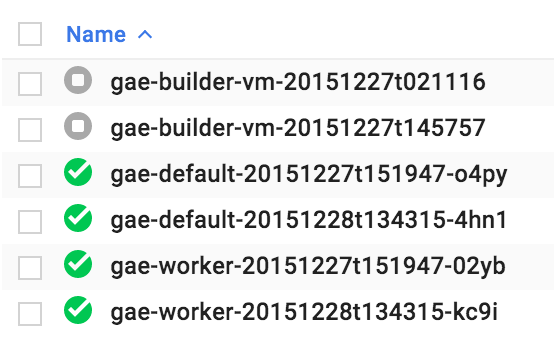 But now what? Will these instances ever turn off by themselves? The best way I've found of getting rid of them so far is from the tutorial's Deleting the project page:

You can find the list of your app versions in the Versions page. To delete the non-default versions, select the check boxes and then click Delete.

Is everyone on Google App Engine just manually deleting the old deployments of their apps?

To stop all instances of all non-default versions of all modules (independently of what languages those modules are in), you could add a small control module, written in Python, using the modules API:

This doesn't delete the non-default versions (the modules API does not appear to currently support deletion), but does ensure that none of their instances are running (so no charges would be incurred for them).

This core logic is meant for you to wrap it inside a handler, so you can trigger it as required, for example in a cron job, or in a "regular" handler that you trigger from the outside (with appropriate auth) e.g. via wget or curl within your bash scripts.

I don't believe there's a Ruby version of Python's google.appengine.api.modules.modules , but, I could be wrong... I just couldn't find one. However, a simple Python-coded module should let you control modules coded in whatever other App Engine language (since App Engine lets you mix and match modules coded in different languages).

The following removes all version except 5 most recent: Uses ghead (on macOS, brew install coreutils), replace with head for linux.

The command below may work:

To turn off the instances associated with older versions you could try to use the teardown scripts (eventually customised) mentioned in the delete tutorial resources doc:

If you tried the tutorial about how to run Ruby on Compute Engine, see the Deployment and teardown scripts section of that tutorial

Careful with deleting the app, though, you can't re-use the app id!

Since the older versions are no longer the default ones at least no new instances will be automatically starting for them. You may still need to delete them manually, unless Google automatically deletes the older automatically assigned versions exceeding the max number of versions allowed for an app.

We created a little Python script to delete old versions automagically. We run it before every deploy so that our deploys always succeed (and never fail due to having too many versions deployed already).

Not the answer you're looking for? Browse other questions tagged ruby-on-rails google-app-engine docker or ask your own question.