We have a project that is stored within our TFS server and some files were Checked-Out by me from another computer and another user (both of which are not used anymore). Is there a way to force the unlocking of the file (no changes were made to it so it's safe to do so if I can only do it).

If you login into the source control with the admin account, you will be able to force undo checkout, or check in with any file you provide.

(Note: I have the TFS Power Tools installed so if you don't see the described options you may need to install them. http://visualstudiogallery.msdn.microsoft.com/b1ef7eb2-e084-4cb8-9bc7-06c3bad9148f )

If you are accessing the Source Control Explorer as a team project administrator (or at least someone with the "Undo other users' changes" access right) you can do the following in Visual Studio 2012 to clear a lock and checkout.

The file is now unlocked.

You can get the tool here: http://www.attrice.info/cm/tfs/

I was able to undo another user's checkout with the following command:

You'll need to wrap that semicolon in double-quotes if you're running the command from PowerShell. We're running TFS 2010 (and VS 2010).

Disclaimer: I got this from the FCI-H blog at http://fci-h.blogspot.com/2011/01/how-to-force-undo-checkout-tfs.html

Team Foundation Sidekicks has a Status sidekick that allows you to query for checked out work items. Once a work item is selected, click the "Undo lock" buttons on the toolbar. 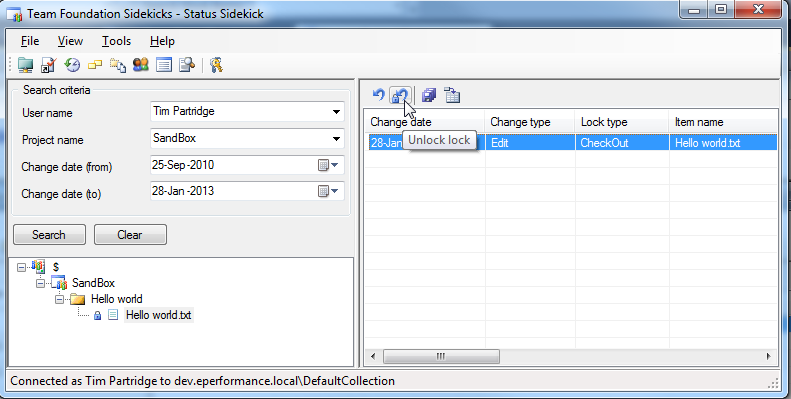 Disclaimer: this answer is an edited repost of Brett Roger's answer to a similar question.

Find in Source Control | Status... allows you to find all files checked out to a specific person

The file didn't unlock so I did a undo on pending changes and after that I could delete the file.

2019 answer, as most of the above is depracated.

Use the unlock command that comes with TFS

You need to be project admin or to have tfs account (user name/password) of the user who had locked the file.

I ended up tf destroying the file and checking it in again, which was pretty silly and had the undesirable effect of removing\ it from previous changesets, but at least got us working again. It wasn't that big a deal in this case since the file had never been changed since being checked in.

Not the answer you're looking for? Browse other questions tagged tfs filelock or ask your own question.

91
How to undo another user's checkout in TFS via the GUI?
5
How to unlock the TFS server files locked by other developer in other machine
3
TF10151: Cannot lock item is checked out by XYZ in workspace Abc
-2
Why can't I open a task of a read-only .dtsx file?
0
Need to checkin a file in TFS Work space
0
How to solve Cannot lock item error for a file which don’t even exist?
0
TFS Web Portal - Document locked for editing by my user
1
Unlock TFS files