I just saw a picture today and think I'd appreciate explanations. So here is the picture: 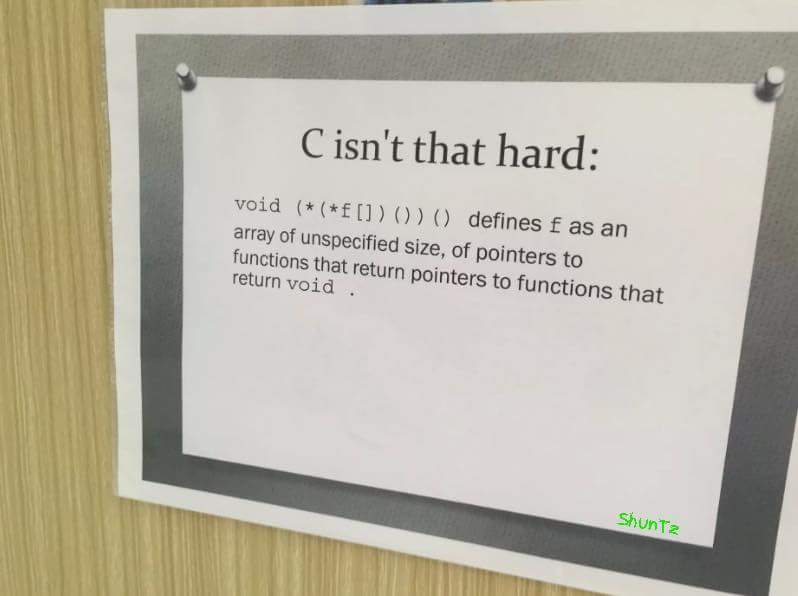 I found this confusing and wondered if such codes are ever practical. I googled the picture and found another picture in this reddit entry, and here is that picture: 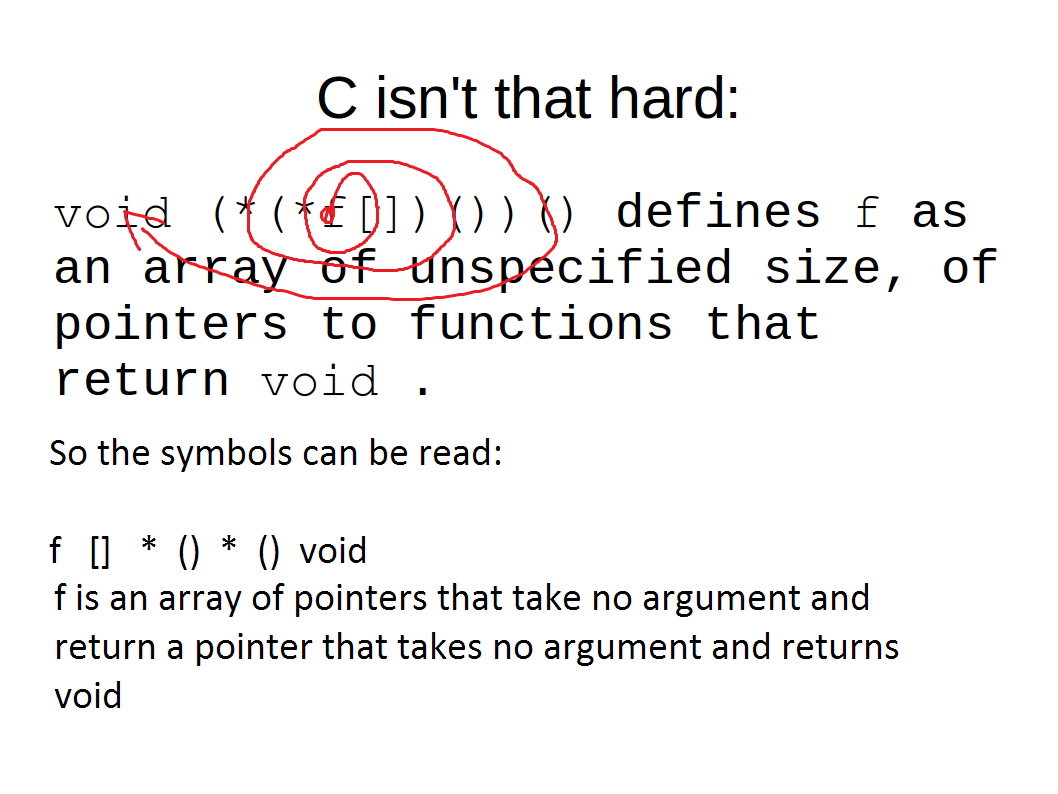 So this "reading spirally" is something valid? Is this how C compilers parse?
It'd be great if there are simpler explanations for this weird code.
Apart from all, can these kind of codes be useful? If so, where and when?

There is a question about "spiral rule", but I'm not just asking about how it's applied or how expressions are read with that rule. I'm questioning usage of such expressions and spiral rule's validity as well. Regarding these, some nice answers are already posted.

There is a rule called the "Clockwise/Spiral Rule" to help find the meaning of a complex declaration.

You can check the link above for examples.

Also note that to help you there is also a website called:

You can enter a C declaration and it will give its english meaning. For

As pointed out in the comments by Random832, the spiral rule does not address array of arrays and will lead to a wrong result in (most of) those declarations. For example for int **x[1][2]; the spiral rule ignores the fact that [] has higher precedence over *.

When in front of array of arrays, one can first add explicit parentheses before applying the spiral rule. For example: int **x[1][2]; is the same as int **(x[1][2]); (also valid C) due to precedence and the spiral rule then correctly reads it as "x is an array 1 of array 2 of pointer to pointer to int" which is the correct english declaration.

Note that this issue has also been covered in this answer by James Kanze (pointed out by haccks in the comments).

The "spiral" rule kind of falls out of the following precedence rules:

So if you want a pointer to an array or a pointer to a function, then you need to explicitly group the * with the identifier, as in (*a)[] or (*f)().

It would be nice if the indirection operator * was postfix instead of unary, which would make declarations somewhat easier to read from left to right (void f[]*()*(); definitely flows better than void (*(*f[])())()), but it's not.

When you come across a hairy declaration like that, start by finding the leftmost identifier and apply the precedence rules above, recursively applying them to any function parameters:

The signal function in the standard library is probably the type specimen for this kind of insanity:

At this point most people say "use typedefs", which is certainly an option:

How would you use f in an expression? You know it's an array of pointers, but how do you use it to execute the correct function? You have to go over the typedefs and puzzle out the correct syntax. By contrast, the "naked" version is pretty eyestabby, but it tells you exactly how to use f in an expression (namely, (*(*f[i])())();, assuming neither function takes arguments).

In C, declaration mirrors usage—that’s how it’s defined in the standard. The declaration:

Is an assertion that the expression (*(*f[i])())() produces a result of type void. Which means:

The “spiral rule” is just a mnemonic that provides a different way of understanding the same thing.

So this "reading spirally" is something valid?

Applying spiral rule or using cdecl are not valid always. Both fails in some cases. Spiral rule works for many cases, but it is not universal.

This rule actually involves zigzagging from one side of the identifier to the other.

by applying the above rules:

Here is a GIF demonstrating how you go (click on image for larger view):

The rules mentioned here is taken from the book C Programming A Modern Approach by K.N KING.

It's only a "spiral" because there happens to be, in this declaration, only one operator on each side within each level of parentheses. Claiming that you proceed "in a spiral" generally would suggest you alternate between arrays and pointers in the declaration int ***foo[][][] when in reality all of the array levels come before any of the pointer levels.

I doubt constructions like this can have any use in real life. I even detest them as interview questions for the regular developers (likely OK for compiler writers). typedefs should be used instead.

As a random trivia factoid, you might find it amusing to know that there's an actual word in English to describe how C declarations are read: Boustrophedonically, that is, alternating right-to-left with left-to-right.

Regarding the usefulness of this, when working with shellcode you see this construct a lot:

While not quite as syntactically complicated, this particular pattern comes up a lot.

More complete example in this SO question.

So while the usefulness to the extent in the original picture is questionable (I would suggest that any production code should be drastically simplified), there are some syntactical constructs that do come up quite a bit.

is just an obscure way of saying

In practice, more descriptive names will be needed instead of ResultFunction and Function. If possible I would also specify the parameter lists as void.

I found method described by Bruce Eckel to be helpful and easy to follow:

To define a pointer to a function that has no arguments and no return value, you say:

You may wonder why *funcPtr requires parentheses. If you didn't use them, the compiler would see:

You would be declaring a function (that returns a void*) rather than defining a variable. You can think of the compiler as going through the same process you do when it figures out what a declaration or definition is supposed to be. It needs those parentheses to “bump up against” so it goes back to the left and finds the ‘*’, instead of continuing to the right and finding the empty argument list.

As an aside, once you figure out how the C and C++ declaration syntax works you can create much more complicated items. For instance:

Walk through each one and use the right-left guideline to figure it out. Number 1 says “fp1 is a pointer to a function that takes an integer argument and returns a pointer to an array of 10 void pointers.”

If you are creating a lot of complicated definitions, you might want to use a typedef. Number 3 shows how a typedef saves typing the complicated description every time. It says “An fp3 is a pointer to a function that takes no arguments and returns a pointer to an array of 10 pointers to functions that take no arguments and return doubles.” Then it says “a is one of these fp3 types.” typedef is generally useful for building complicated descriptions from simple ones.

You will rarely if ever need such complicated declarations and definitions as these. However, if you go through the exercise of figuring them out you will not even be mildly disturbed with the slightly complicated ones you may encounter in real life.

Remember these rules for C declares
And precedence never will be in doubt:
Start with the suffix, proceed with the prefix,
And read both sets from the inside, out.
-- me, mid-1980's

Except as modified by parentheses, of course. And note that the syntax for declaring these exactly mirrors the syntax for using that variable to get an instance of the base class.

Seriously, this isn't hard to learn to do at a glance; you just have to be willing to spend some time practising the skill. If you're going to maintain or adapt C code written by other people, it's definitely worth investing that time. It's also a fun party trick for freaking out other programmers who haven't learned it.

For your own code: as always, the fact that something can be written as a one-liner does't mean it should be, unless it is an extremely common pattern that has become a standard idiom (such as the string-copy loop). You, and those who follow you, will be much happier if you build complex types out of layered typedefs and step-by-step dereferences rather than relying on your ability to generate and parse these "at one swell foop." Performance will be just as good, and code readability and maintainability will be tremendously better.

It could be worse, you know. There was a legal PL/I statement that started with something like:

I happen to be the original author of the spiral rule that I wrote oh so many years ago (when I had a lot of hair :) and was honored when it was added to the cfaq.

I wrote the spiral rule as a way to make it easier for my students and colleagues to read the C declarations "in their head"; i.e., without having to use software tools like cdecl.org, etc. It was never my intent to declare that the spiral rule be the canonical way to parse C expressions. I am though, delighted to see that the rule has helped literally thousands of C programming students and practitioners over the years!

It has been "correctly" identified numerous times on many sites, including by Linus Torvalds (someone whom I respect immensely), that there are situations where my spiral rule "breaks down". The most common being:

As pointed out by others in this thread, the rule could be updated to say that when you encounter arrays, simply consume all the indexes as if written like:

Now, following the spiral rule, I would get:

"ar is a 10x10 two-dimensional array of pointers to char"

I hope the spiral rule carries on its usefulness in learning C!

Not the answer you're looking for? Browse other questions tagged c parsing pointers function-pointers void-pointers or ask your own question.

212
Constant pointer vs Pointer to constant
39
What does `((void (*)())0x1000)();` mean?
38
What's the meaning of this piece of code? void (*signal(int sig, void (*func)(int)))(int);
14
What does this weird function pointer declaration in C mean?
19
The spiral rule about declarations — when is it in error?
15
Shellcode in C program
19
Spiral rule and 'declaration follows usage' for parsing C and C++ declarations
5
C++/C function pointers that return void*
4
Parsing C declarations
0
What this declaration "float (*x[20])(int *a)" means?
See more linked questions

776
Why isn't sizeof for a struct equal to the sum of sizeof of each member?
1715
With arrays, why is it the case that a[5] == 5[a]?
132
Concept of void pointer in C programming
172
Objective-C: difference between id and void *
3152
Improve INSERT-per-second performance of SQLite
200
Pointer arithmetic for void pointer in C
690
Can code that is valid in both C and C++ produce different behavior when compiled in each language?
142
Pointer expressions: *ptr++, *++ptr and ++*ptr