Building a .NET Core app via command line, so that it works on a machine without .NET Core installed

In my previous .NET projects, I did all the development inside Visual Studio, but I also created a batch/MSBuild file so I could build the whole project (including setups, NuGet packages, zip files with binaries etc.) with one single click. Here's an example from a previous project.

In the end, I want to do something similar with my .NET Core test project.
But right now I'm failing at the first step: I'm unable to build it outside Visual Studio, so that the result works on another Windows machine without .NET Core installed.
(in the first step, I'm ignoring the cross-platform part - I'll be happy to get it to work on Windows)

I managed to get it to work inside Visual Studio 2015 Community Edition as follows:

Here's my test project on GitHub.

When I do "Build" ⇒ "Publish" in the menu again, Visual Studio apparently executes the previously created PowerShell script again.
The result is slightly over 90 MB, consists of 825 files in 598 folders, and looks like this: 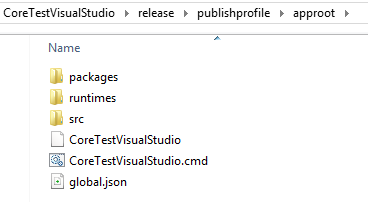 When I copy it on another machine (Win 7 / .NET 4 installed / .NET Core not installed), it works.

What I tried to get the same result outside Visual Studio

This answer and this answer sound like I can use dnu publish to achieve the same result via the command line.
I understand that parts of .NET Core are still moving targets right now, so apparently dnu is now dotnet instead.

So I tried to execute dotnet publish (and created a batch file) for it:

The result consists of an .exe file and a bunch of DLLs, only 25 files and 1.5 MB, all in one single folder: 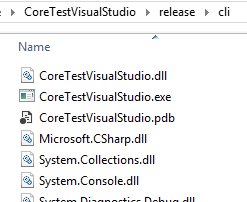 Obviously the .NET Core runtime is missing here, and as expected, this app crashes when I try to execute it on a machine without .NET Core installed (the same one as mentioned above).

2. The PowerShell script from the publish profile

I tried to execute the PowerShell script (which was created when I created the publish profile) outside Visual Studio, but it failed because the script expects some parameters and I don't know what to pass:

There's also this line in the script:

...but the link just points to the landing page of the .NET Web Development and Tools Blog.

I know that the first release of .NET Core mainly focuses on ASP.NET, but as I understood it, ASP.NET Core apps are just console apps as well, so I thought a basic console app would work now.
On the other hand, most of the console app "getting started" docs are still missing, so maybe it's just too early and dotnet publish for console apps is not finished yet?

Problem solved!
I posted it on the issue tracker of the .NET Core command line tools, and it turned out that it was a bug in dotnet publish - it didn't bundle the C++ runtime, which is needed to execute the compiled app on a machine without .NET Core installed.

There's an option for dnu publish called --runtime that specifies the runtime to include when publishing. You would use the full runtime name with the command, e.g.:

You don't need to specify the runtime or framework versions -- by default, dotnet publish will use the framework from project.json and the current runtime flavor. However, the documentation states that:

dotnet-publish command also requires certain dependencies in the project.json to work. Namely the Microsoft.NETCore.Runtime package must be referenced as a dependency in order for the command to copy the runtime files as well as the application's files to the published location.

Not the answer you're looking for? Browse other questions tagged c# visual-studio dnx .net-core coreclr or ask your own question.

60
MSVCP140.dll missing
30
Can an ASP.NET 5 application be published such that the target machine doesn't need DNX installed?
5
Can I build .NET Core applications on a Windows server without Visual Studio installed?
7
Using .NET Core on Desktop Application
7
Do .NET Core apps require the .NET runtime installed on the target machine?
6
How to publish console App (.NET core 5) as single EXE file in VS 2015 RC?
0
Issue with natively binding my .Net core app to single .exe