Python: how to capture image from webcam on click using OpenCV

I want to capture and save a number of images from my webcam using OpenCV. This is my code currently:

The problem with this is that I do not know when the images are being taken, so a lot of them end up blurry. My question is: Is there a way to have the image taken on the click of a keyboard key?

Also is there a better way to take multiple images, instead of range?

Here is a simple program that displays the camera feed in a cv2.namedWindow and will take a snapshot when you hit SPACE. It will also quit if you hit ESC.

I think this should answer your question for the most part. If there is any line of it that you don't understand let me know and I'll add comments.

If you need to grab multiple images per press of the SPACE key, you will need an inner loop or perhaps just make a function that grabs a certain number of images.

Note that the key events are from the cv2.namedWindow so it has to have focus.

Breaking down your code example (Explanations are under the line of code.)

creates an object called camera, of type openCV video capture, using the first camera in the list of cameras connected to the computer.

tells the program to loop the following indented code 10 times

read values from the camera object, using it's read method. it resonds with 2 values save the 2 data values into two temporary variables called "return_value" and "image"

fewer indents means that the loop has now ended...

deletes the camrea object, we no longer needs it.

you can what you request in many ways, one could be to replace the for loop with a while loop, (running forever, instead of 10 times), and then wait for a keypress (like answered by danidee while I was typing)

or create a much more evil service that hides in the background and captures an image everytime someone presses the keyboard...

i'm not too experienced with open cv but if you want the code in the for loop to be called when a key is pressed, you can use a while loop and an raw_input and a condition to prevent the loop from executing forever

This is a simple program to capture an image from using a default camera. Also, It can Detect a human face. 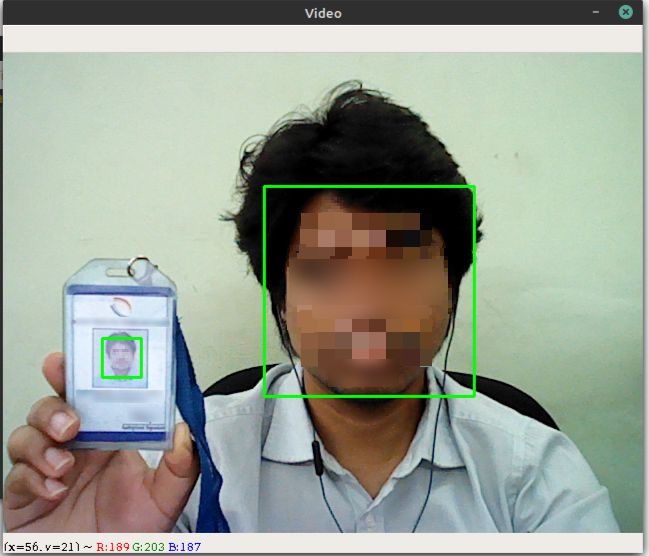 Also, You can check out my GitHub code

Here is a simple programe to capture a image from using laptop default camera.I hope that this will be very easy method for all.

You can see my github code here

2077
How to determine a Python variable's type?
2588
How do I get a substring of a string in Python?
3244
How do I concatenate two lists in Python?
2625
How to upgrade all Python packages with pip?
2982
How can I access environment variables in Python?
2482
How do I lowercase a string in Python?
3150
How can I delete a file or folder in Python?
1864
Image Processing: Algorithm Improvement for 'Coca-Cola Can' Recognition
2728
How can I remove a key from a Python dictionary?
3266
How do I select rows from a DataFrame based on column values?