I develop an enterprise app that I have installed onto a group of iOS 9.1 and 9.2 iPads.

I have trusted the profile after app installation (e.g. following the steps in this question: iOS9 Untrusted Enterprise Developer with no option to trust) and the app was working fine.

After a few days / weeks, the "Untrusted Enterprise Developer" pop up starts to appear again when the app is launched, and in Settings->General->Device Management the app shows as 'Not Verified'

Has anyone else experienced this / is there a way around it?

I'm not currently sure if there is specific steps that cause it (e.g. a specific amount of time has passed / the unit has been plugged into a Mac / etc). I'm trying to work that out at the moment.

EDIT: I've made some edits to the original question. I have now realised that the app is still trusted, but is no longer verified (I didn't realise before that there was a difference between the two).

The following screenshot is from the Device Management section on the iPad. This is taken several days after the app has been Trusted and Verified; and was working without issue. 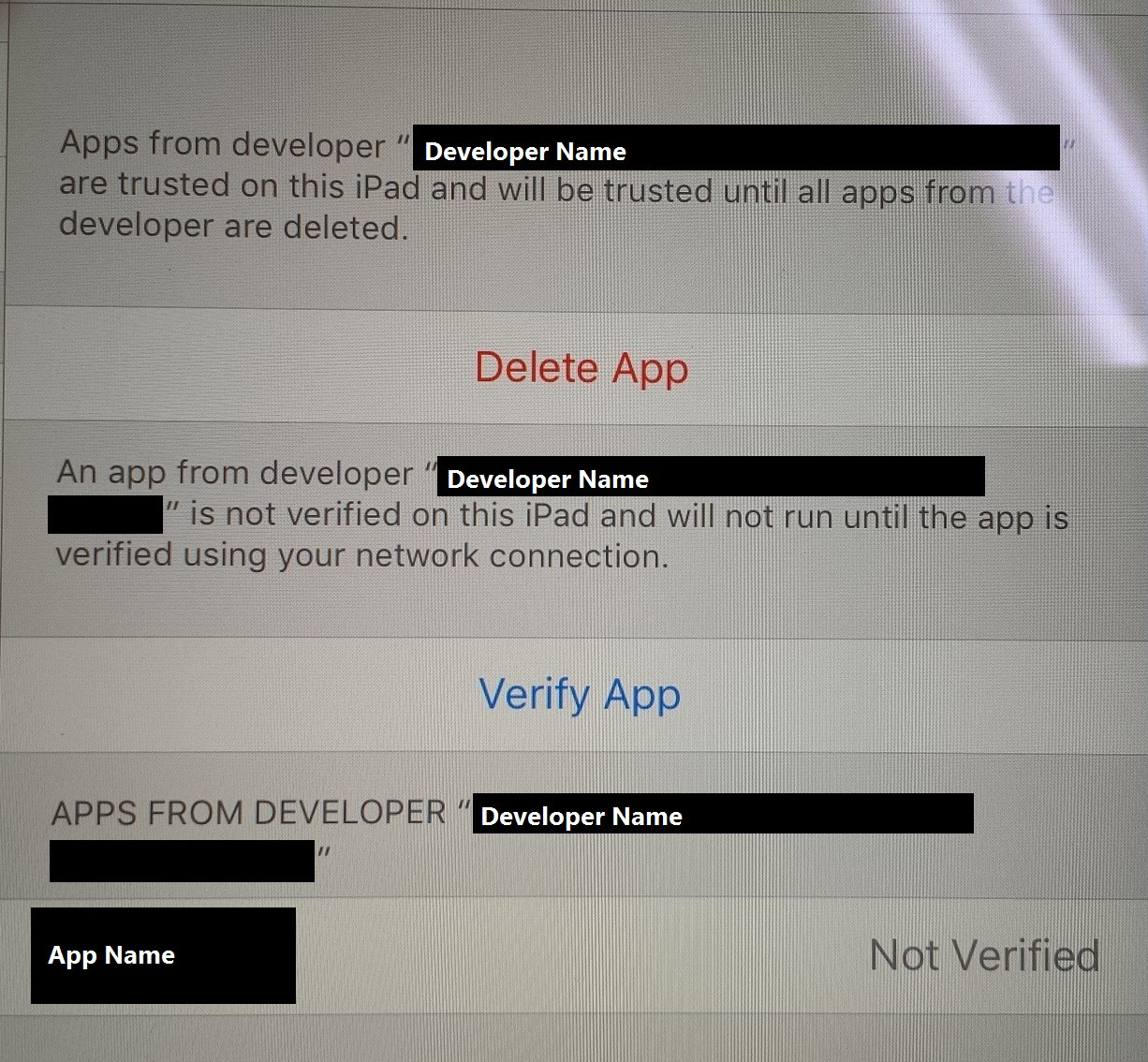 I have raised a bug report with Apple, but have not heard back yet.

We have the same issue with several thousand iOS 9.2 iPads that have enterprise apps installed but don't have continuous internet connectivity due to spending their lives on isolated networks or in flight mode.

Our testing suggests that despite the Apple documentation at https://support.apple.com/en-gb/HT204460 saying clearly that "This developer remains trusted until you use the Delete App button to remove all apps from the developer.", this is in fact not the whole picture.

It seems the validity of the signing credentials is periodically re-validated (presumably to check for revocation) and if that re-validation fails for any reason or can't be completed, the developer reverts to its un-trusted state and the app will not launch.

Replication is tricky as it's not quite as simple as rolling the date forward more than a month but repetition of that twinned with continuous usage and relaunching the app exposes the problem. We haven't yet found a mechanism to force this re-validation on demand. Both iTunes and MDM installed .ipa files display this behavior. The manual trust within the UI and the implicit trust given by pre-installed certificates seemingly work the same way behind the scenes.

We're about to start testing the behavior on the new betas but that conversation can't be continued here.

We are experiencing exactly the same problem....very frustrating indeed.

I work for a company with 10,000 + iPads deployed through a popular MDM platform, since roughly November 2015 an increasing number of our iPads have been displaying this message when a user attempts to open any of our internal apps. We advise a workaround, which works for roughly 24 hours. After this time, the message reappears.

Our iPads are connected to our own secure corp wifi, this network is unable to communicate with apple due to apple.com being block on our firewall. Pre November, when an untrusted developer message appeared, we would advise the user to connect the iPad with an open network, close the app and re-open. The app would open and the message would not longer appear.

I have since discovered, the iPad needed to communicate with a specific apple url to authenticate or renew the developer operational certificate, this url is ppq.apple.com. Currently this url is down which means the server that authenticates certificates is offline, hence the repeat occurence of the untrusted developer message.

Not the answer you're looking for? Browse other questions tagged ios ios9 ios-enterprise or ask your own question.

426
iOS9 Untrusted Enterprise Developer with no option to trust