I'm implementing some tests for a project of mine using karma locally, and Travis for github tests integration (you can't merge pull requests unless all tests pass)

I really want to do the same for code formatting. I'm using jscs with gulp in order to lint the code.

I thought about adding a test for Travis in order to make tests fail if a PR isn't formatted correctly.

Is there a standard way of doing this? Currently, I thought about two options: adding a test to my test suit that checks formatting. make the test fail if any error returned. The other option, is to just run a task on Travis, but I can't make the Travis build fail on the lint task.

I saw there's a preprocessor for karma but as much as I was able to check, it doesn't make travis fail if any jscs errors were found.

Is there any better practice for this?

You need to make you gulp/grunt task return a non-zero in order for it to fail. If a task fails, Travis will take that as a build failure, which will indicate that tests failed for the PR. In gulp and jscs, I did it like so:

Most linters have a reporter. If you pipe a .reporter('fail') at the end, it will return a non-zero if your linter returned any lint errors.

For Grunt, by @Nocomm answer, it looks like grunt automatically returns a non-zero if any lint errors were found.

you can just add your lint task as a dependecy for you test task. If you add it like so:

When Travis will start running your tests, it will first check that all files are formatted correctly. If they're not, Travis will take the non-zero return as a failure and report correctly on GitHub

Now that your lint task fails on lint warnings, your can add that task to .travis.yml before_script list of commands to run before running tests. Just add it to the end of the list in order to run it just before tests (why run tests on a PR that is going to fail because of formatting?), and right after you install everything needed to run such a task. 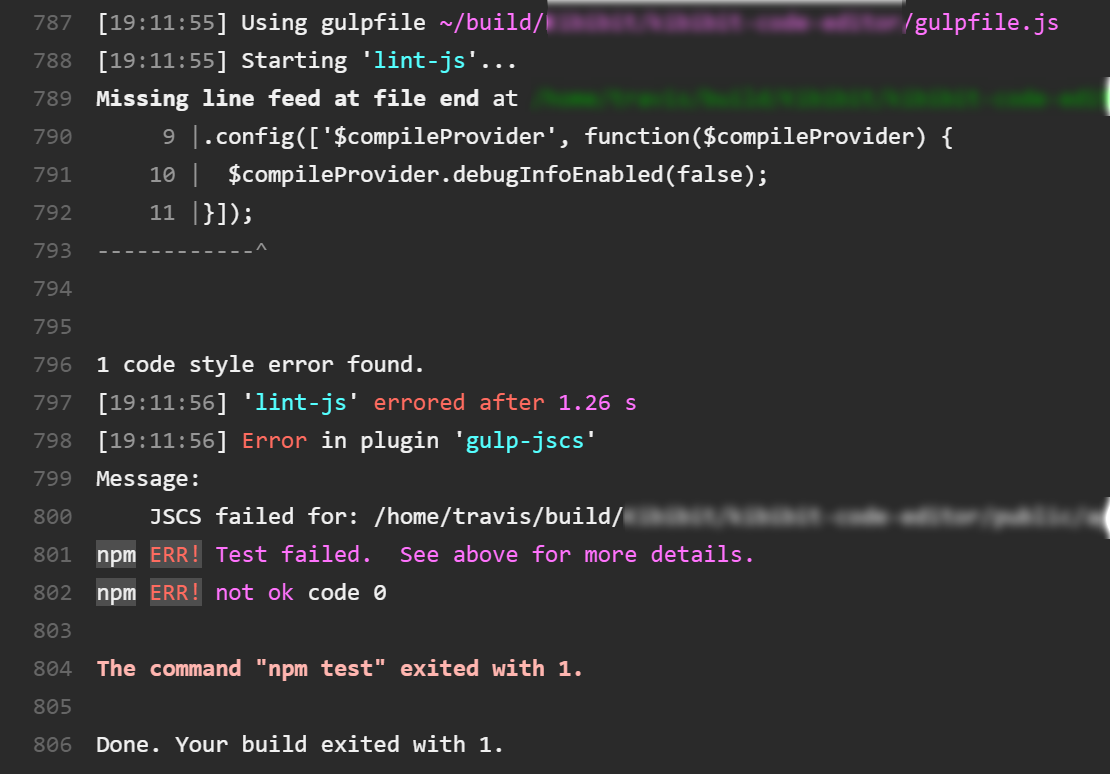 I use Grunt or Gulp to run all of my JavaScript tasks. They both do the same things, but are very different in the way they look and feel. I am not an expert at either of them, so take what I say with a grain of salt. I don't have experience with Travis, but I currently use Grunt in one of my Jenkins builds.

I am assuming you are familiar with NodeJS and npm if you are using Karma.

I'll give you an example using Grunt to illustrate what I think you are trying to do.

Now here is an example Gruntfile.js, which should also be located in your project's root.

To run the task from the command line, go to the directory where your Gruntfile.js is and run grunt test. I'm not sure if this is application to Travis, but in Jenkins the build fails if JSHint finds errors. This can be bypassed if you use the --force option: grunt --force test.

lib_test under the jshint task configuration includes the files you want to lint. Make sure they are relative to where your Gruntfile lives, which should be in the project's root.

Grunt and Gulp can do so much more. If you really want to get into JavaScript task automation, I would suggest learning Gulp. However, I think this should be a good short-term solution for you.

Not the answer you're looking for? Browse other questions tagged javascript testing formatting karma-runner travis-ci or ask your own question.

1077
How do you remove all the options of a select box and then add one option and select it with jQuery?
311
How do I run all Python unit tests in a directory?
588
Testing if a checkbox is checked with jQuery
23
Angular testing with Karma: “module is not defined”
1
Use angularjs directive templates from $templateCache in karma tests
4
Getting “module not defined” error when using Gulp to run karma tests
1
Prevent Karma & Protractor from Linting Files
6
Karma don’t fail if tests have errors
0
Format Gulp Output for Clearer Errors