I'm attempting to move an App Service from one service plan to another. When I use the portal to do so, the other App Service plan is not displaying.

The other App Service Plan which you intend to move your Web Apps to is in another resource group with existing Azure Web Apps, which is not supported currently

Hope this answer your question.

Not sure if it is something recent, but it seems it is finally possible. The option is in the main resource menu as "Change App Service plan". See: 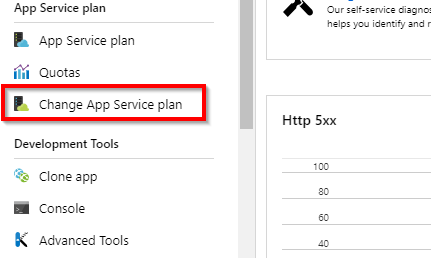 I was able to move an app service(website) and also its deployment slot to a different plan (with same parameters and location - but did not try if this is a requirement).

But sometime you will get No App Service Plan Found as this is the known restriction for the moving App Service plan.

You can find this in the official doc here and here

You can also refer this SO

You can configure a backup and restore on the new App Service under the new APp Service Plan.

Put your code in DevOps and deploy it to the new service plan and point DNS.

thank you for the tips i found a work around. you can move app service plan to the same resource group, and then you can move apps from one plan to another. Move resource first will do a check, after that you can review and finally move.

Not the answer you're looking for? Browse other questions tagged web-services azure azure-app-service-plans azure-web-app-service or ask your own question.