This is an extension of my previous question: https://dsp.stackexchange.com/questions/28095/choosing-low-pass-filter-parameters I am recording people from an overheard camera. I have tracks of each's head using some software. I want to periodicity from tracks due to head wobbling.

I apply low-pass butterworth filter. I want the starting point and ending point of the filtered to be same as unfiltered tracks. 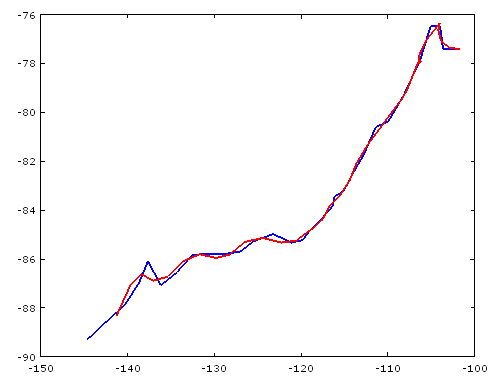 In the above example, the endpoint(to the left) is different for filtered and unfiltered tracks. How can I ensure it is same?

Your question is pretty ambiguous, and doesn't really have a specific question. I'm assuming you want to have your filtered data start at the same points as the measured data, but are unsure why this is not happening already, and how to do so.

In order to solve this problem, you could just append the first data point to the data set four times, as this means that the filter will produce the same number of points. This is a pretty rough solution, however, as you are creating new data. This could be achieved quite simply, for example if your dataset is called myArray:

This will create four data points equal to your first data point, which should then allow you to apply the low pass filter to your data, and have it start at the same point.

Hope this helps, although it's worth bearing in mind that filtering ALWAYS results in a loss of data.

Because you don't want to implement it but want someone else to: The theory as above is correct, but instead you need to add 2 values at the end of your vectors:

This gives the following: 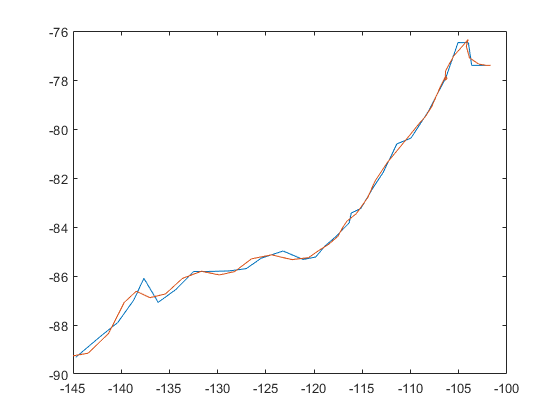 As you can see the ends are pretty close to being the same now.

Not the answer you're looking for? Browse other questions tagged matlab filter or ask your own question.

7
Programming a low-pass filter
3
Matlab low pass filter output initial/end value
1
Ideal Low Pass Filter Concept in MATLAB
-1
Trying to implement butterworth for high and low pass filter on data but am getting errors
4
How to configure Kalman filter matrices to track objects on a moving conveyor
1
Using python builtins to pass django request from middleware to model in order to create default model filters for current user?
1
Low-pass Chebyshev type-I filter with Scipy
1
Differential part of PID and its low pass filter- time domain
0
How to apply a Butterworth Low-Pass Filter in the Frequency Domain and Plot the New Frequency