Difference between Running and Starting a Docker container

In practice to start a container I do:

If thats the case, what does:

In the manual it says

Start one or more stopped containers

This is a very important question and the answer is very simple, but fundamental:

The docker run doc does mention:

The docker run command first creates a writeable container layer over the specified image, and then starts it using the specified command.

That is, docker run is equivalent to the API /containers/create then /containers/(id)/start.

You do not run an existing container, you docker exec to it (since docker 1.3).
You can restart an exited container.

Explanation with an example:

Consider you have a game (iso) image in your computer.

When you run (mount your image as a virtual drive), a virtual drive is created with all the game contents in the virtual drive and the game installation file is automatically launched. [Running your docker image - creating a container and then starting it.]

But when you stop (similar to docker stop) it, the virtual drive still exists but stopping all the processes. [As the container exists till it is not deleted]

And when you do start (similar to docker start), from the virtual drive the games files start its execution. [starting the existing container]

In this example - The game image is your Docker image and virtual drive is your container.

Just a quick and dirty formula for people like me who mixes up run and start from time to time:

run command creates a container from the image and then starts the root process on this container. Running it with run --rm flag would save you the trouble of removing the useless dead container afterward and would allow you to ignore the existence of docker start and docker remove altogether. 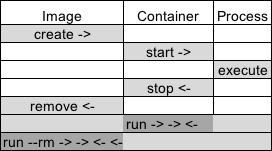 How to remove container once it is stopped automatically? Add an --rm flag to run command:

How to execute multiple commands in a single container? By preventing that root process from dying. This can be done by running some useless command at start with --detached flag and then using "execute" to run actual commands:

Why do we need docker stop then? To stop this lingering container that we launched in the previous snippet with the endless command tail -f /dev/null.