How to install TensorFlow on Windows?

I am starting to work with TensorFlow library for deep learning, https://www.tensorflow.org/.

I found a explicit guide to work on it on linux and Mac but I did not find how to work with it under Windows. I try over the net, but the information are lacking.

I use Visual Studio 2015 for my projects, and I am trying to compile the library with Visual studio Compiler VC14.

How to install it and to use it under Windows?

How to install TensorFlow and to use it under Windows?

Windows 10 now has a Ubuntu Bash environment, AKA Bash on Ubuntu on Windows, available as a standard option (as opposed to Insider Preview updates for developers). (StackOverflow tag wsl) This option came with the Windows 10 anniversary update (Version 1607) released on 8/2/2016. This allows the use of apt-get to install software packages such as Python and TensorFlow.

Note: Bash on Ubuntu on Windows does not have access to the GPU, so all of the GPU options for installing TensorFlow will not work.

The dated installation instructions for Bash on Ubuntu on Windows are basically correct, but only these steps are necessary:
Prerequisites
Enable the Windows Subsystem for Linux feature (GUI)
Reboot when prompted
Run Bash on Windows

and run an actual neural network

After learning about the developer preview of Bash on Windows.

Bazel is the problem

TensorFlow is not made with build automation tools such as make, but with Google's in-house build tool Bazel. Bazel only works on systems based on Unix such as Linux and OS X.

Since the current published/known means to build TensorFlow uses Bazel and Bazel does not work on Windows, one can not install or run TensorFlow natively on Windows.

Due to its UNIX heritage, porting Bazel to Windows is significant work. For example, Bazel uses symlinks extensively, which has varying levels of support across Windows versions.

We are currently actively working on improving Windows support, but it's still ways from being usable.

The solutions are listed in the order of complexity and work needed; from about an hour to may not even work.

Docker is a system to build self contained versions of a Linux operating system running on your machine. When you install and run TensorFlow via Docker it completely isolates the installation from pre-existing packages on your machine.

Also look at TensorFlow - which Docker image to use?

If you have a current Mac running OS X then see: Installation for Mac OS X

Download and install a virtual machine such as the commercial VMware or the free Virtual Box, after which you can install Linux and then install TensorFlow.

When you go to install TensorFlow you will be using Pip - Python's package management system. Visual Studio users should think NuGet. The packages are known as wheels.

If you need to build from the source then see: Installing From Sources
~ 4 hours

Note: If you plan on using a Virtual Machine and have never done so before, consider using the Docker option instead, since Docker is the Virtual Machine, OS and TensorFlow all packaged together.

If you want to run TensorFlow on the same machine that you have Windows and make use of the GPU version then you will most likely have to use this option as running on a hosted Virtual Machine, Type 2 hypervisor, will not allow you access to the GPU.

If you have remote access to another machine that you can install the Linux OS and TensorFlow software on and allow remote connections to, then you can use your Windows machine to present the remote machine as an application running on Windows.

Cloud services such as AWS are being used.

Want to run the model as a service in the cloud? Containerize with Docker and TensorFlow just works.

Currently it appears the only hold up is Bazel, however Bazel's roadmap list working on Windows should be available this year.

There are two features listed for Windows:

While I have not researched this more, you can look at the continuous integration info for needed files and info on how to they build it for testing. (Readme) (site)

There is a public experimental source code version of Bazel that boots on Windows. You may be able to leverage this into getting Bazel to work on Windows, etc.

Also these solutions require the use of Cygwin or MinGW which adds another layer of complexity.

This currently does not exist for TensorFlow. It is a feature request.

You build TensorFlow on Linux using Bazel but change the build process to output a wheel that can be installed on Windows. This will require detailed knowledge of Bazel to change the configuration, and locating the source code and libraries that work with Windows. An option I would only suggest as a last resort. It may not even be possible.

You will know as much as I do by reading the referenced article.

Since it is experimental software I would not use on a production machine.

Currently I have several versions for learning. Most use a VMWare 7.1 Workstation to host Ubuntu 14.04 LTS or Ubuntu 15 or Debian. I also have one dual boot of Ubuntu 14.04 LTS on my Windows machine to access the GPU as the machine with VMware does not have the proper GPU. I would recommend that you give these machines at least 8G of memory either as RAM or RAM and swap space as I have run out of memory a few times.

I can confirm that it works in the Windows Subsystem for Linux! And it is also very straightforward.

In the Ubuntu Bash on Windows 10, first update the package index:

Then install pip for Python 2:

The package is now installed an you can run the CNN sample on the MNIST set:

I just tested the CPU package for now.

I blogged about it: http://blog.mosthege.net/2016/05/11/running-tensorflow-with-native-linux-binaries-in-the-windows-subsystem-for-linux/

Sorry for the excavation, but this question is quite popular, and now it has a different answer.

Google officially announced the addition of Windows (7, 10, and Server 2016) support for TensorFlow: developers.googleblog.com

The Python module can be installed using pip with a single command:

And if you need GPU support:

TensorFlow manual - How to install pip on windows

Another useful information are included in release notes: https://github.com/tensorflow/tensorflow/releases

UPD: As @m02ph3u5 right mentioned in the comments TF for windows supports only Python 3.5.x Installing TensorFlow on Windows with native pip

You can now run something like following to test whether TensorFlow is working fine:

TensorFlow comes with a few models, which are located in C:\Python35\Lib\site-packages\tensorflow\models\ (assuming you installed python in C:\Python35). For example, you can run in the console:

Limitations of TensorFlow on Windows

The Microsoft Windows support was introduced in TensorFlow in version 0.12 RC0 (release notes):

Now Tensorflow is officially supported in Windows, you can install it using pip command of Python 3.5 without compile it yourself

cp35 indicates python 3.5 wheel, 0.12.0 the version, you can edit these according your preference, or to install latest CPU version available you can use

cp35 indicates python 3.5 wheel, 0.12.0 the version, you can edit these according your preference, or to install latest GPU version available you can use

Following may work for you: install Virtual Box, create Linux VM and install Linux into it. I'd recommend Ubuntu, because Google often uses it internally. Then, install TensorFlow in Linux VM.

You can't at the moment. The problem is that tensorflow uses the bazel build another Google internal tool that has been exposed as an open source project and it has only support for mac and unix. Until bazel is ported to windows or another build system is added to tensorflow there is a little chance to run tensorflow natively on windows.

That said you can install virtualbox and then install docker-machine and run a linux container with tensorflow inside it.

I managed to install TensorFlow on Win8.1 without Docker using advice from https://discussions.udacity.com/t/windows-tensorflow-and-visual-studio-2015/45636

i didn't manage to do it with Python3.5

I managed also to install on Win8.1 via Cloud9 There is a video tutorial on Youtube.

EDIT: actually for the above, (not Cloud9 which is fine) i have problems: TensorFlow LOOKS LIKE it's installed (i can see it in the list of modules installed in VS2015 when clicking in Solution Explorer on Python 64-bit 2.7) but if i type in a script or in Python Interactive import tensorflow as TF then i get an error message 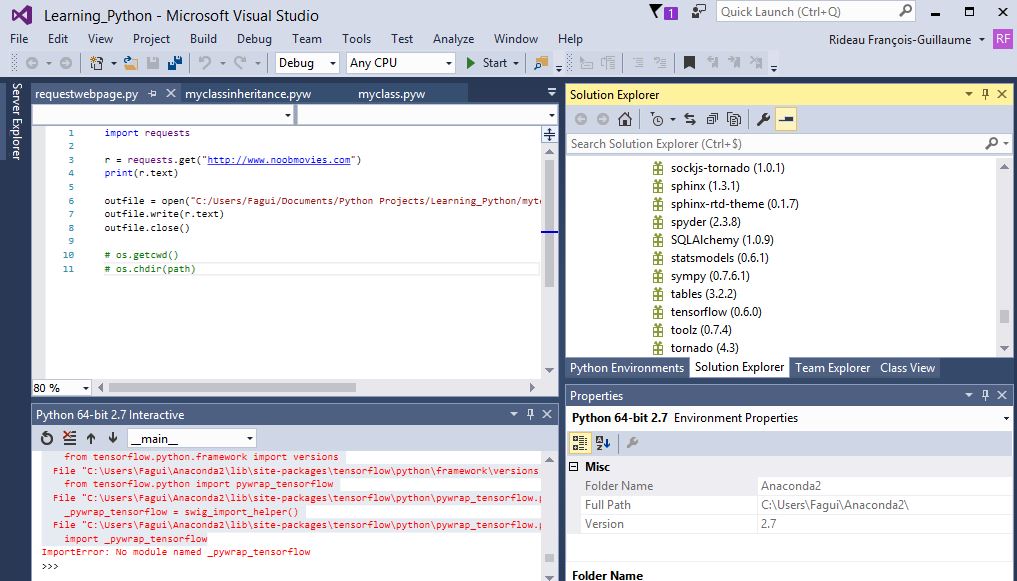 As of writing this answer, I wasn't able to get tensorflow to install properly with python version 3.5.2. Reverting to python 3.5.0 did the trick.

Then I was able to install with

If you have already installed anaconda on your windows, there is an easier way as I found out:

This is similar to virtualenv and I found this helpful.

25
How do I get the commands executed by Bazel
4
TensorFlow - which Docker image to use?
5
TensorFlow dependencies needed. How to run TensorFlow on Windows
2
Whl file for tensorflow installation on windows
0
Building new TensorFlow Op, is there a build system standard?
1
Python module installed on Windows 10 with Ubuntu bash is not recognized
0
DLL load failed with Python 2.7.12 in spyder (Anaconda 4.2.0 32bit)
0
is there a way to use tensorflow on windows 10 without slowing it down with a virtual machine?

1253
How can I develop for iPhone using a Windows development machine?
3054
How do I set, clear, and toggle a single bit?
3314
How do I iterate over the words of a string?
2734
Is there an equivalent of 'which' on the Windows command line?
1467
Ignoring directories in Git repositories on Windows
462
Why does the 260 character path length limit exist in Windows?
1994
How do I remedy "The breakpoint will not currently be hit. No symbols have been loaded for this document." warning?
2720
How do I install pip on Windows?