How do I undo 'git add' before commit?

Ask Question
Asked 14 years, 1 month ago
Modified 4 months ago
Viewed 4.8m times
10863
Want to improve this post? Provide detailed answers to this question, including citations and an explanation of why your answer is correct. Answers without enough detail may be edited or deleted.

I mistakenly added files to Git using the command:

I have not yet run git commit. How do I undo this so that these changes will not be included in the commit?

That will remove the file from the current index (the "about to be committed" list) without changing anything else.

To unstage all changes for all files:

In old versions of Git, the above commands are equivalent to git reset HEAD <file> and git reset HEAD respectively, and will fail if HEAD is undefined (because you haven't yet made any commits in your repository) or ambiguous (because you created a branch called HEAD, which is a stupid thing that you shouldn't do). This was changed in Git 1.8.2, though, so in modern versions of Git you can use the commands above even prior to making your first commit:

"git reset" (without options or parameters) used to error out when you do not have any commits in your history, but it now gives you an empty index (to match non-existent commit you are not even on).

When I was new to this, I first tried

(to undo my entire initial add), only to get this (not so) helpful message:

It turns out that this is because the HEAD ref (branch?) doesn't exist until after the first commit. That is, you'll run into the same beginner's problem as me if your workflow, like mine, was something like:

And that the correct solution was right there in the Git status output (which, yes, I glossed over as 'crap)

And the solution indeed is to use git rm --cached FILE.

Note the warnings elsewhere here - git rm deletes your local working copy of the file, but not if you use --cached. Here's the result of git help rm:

--cached Use this option to unstage and remove paths only from the index. Working tree files, whether modified or not, will be left.

I proceed to use

to remove everything and start again. Didn't work though, because while add . is recursive, turns out rm needs -r to recurse. Sigh.

Okay, now I'm back to where I started. Next time I'm going to use -n to do a dry run and see what will be added:

I zipped up everything to a safe place before trusting git help rm about the --cached not destroying anything (and what if I misspelled it).

Git will tell you what is staged, etc., including instructions on how to unstage:

I find Git does a pretty good job of nudging me to do the right thing in situations like this.

To clarify: git add moves changes from the current working directory to the staging area (index).

This process is called staging. So the most natural command to stage the changes (changed files) is the obvious one:

Pity there is no git unstage nor git unadd commands. The relevant one is harder to guess or remember, but it is pretty obvious:

We can easily create an alias for this:

And finally, we have new commands:

Personally I use even shorter aliases:

An addition to the accepted answer, if your mistakenly-added file was huge, you'll probably notice that, even after removing it from the index with 'git reset', it still seems to occupy space in the .git directory.

This is nothing to be worried about; the file is indeed still in the repository, but only as a "loose object". It will not be copied to other repositories (via clone, push), and the space will be eventually reclaimed - though perhaps not very soon. If you are anxious, you can run:

Update (what follows is my attempt to clear some confusion that can arise from the most upvoted answers):

So, which is the real undo of git add?

Strictly speaking, and if I'm not mistaken: none.

In light of this, the question is slightly ambiguous:

The OP's scenario seems to be the first one (untracked file), we want the "undo" to remove the file (not just the current contents) from the tracked items. If this is the case, then it's ok to run git rm --cached <file>.

And we could also run git reset HEAD <file>. This is in general preferable, because it works in both scenarios: it also does the undo when we wrongly added a version of an already tracked item.

But there are two caveats.

First: There is (as pointed out in the answer) only one scenario in which git reset HEAD doesn't work, but git rm --cached does: a new repository (no commits). But, really, this a practically irrelevant case.

Second: Be aware that git reset HEAD can't magically recover the previously cached file contents, it just resynchronises it from the HEAD. If our misguided git add overwrote a previous staged uncommitted version, we can't recover it. That's why, strictly speaking, we cannot undo [*].

Of course, this is not very critical if we just follow the usual lazy workflow of doing 'git add' only for adding new files (case 1), and we update new contents via the commit, git commit -a command.

* (Edit: the above is practically correct, but still there can be some slightly hackish/convoluted ways for recovering changes that were staged, but not committed and then overwritten - see the comments by Johannes Matokic and iolsmit)

After you staged unwanted file(s), to undo, you can do git reset. Head is head of your file in the local and the last parameter is the name of your file.

I have created the steps in the image below in more details for you, including all steps which may happen in these cases: 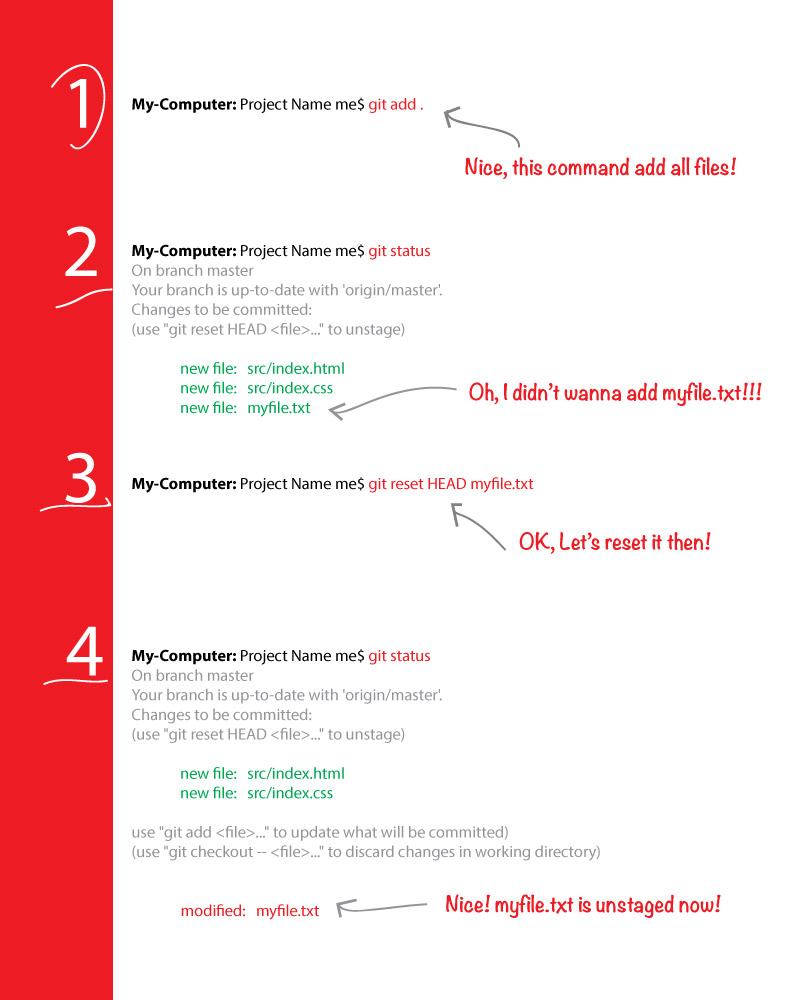 will "un-add" everything you've added from your current directory recursively

Git has commands for every action imaginable, but it needs extensive knowledge to get things right and because of that it is counter-intuitive at best...

What you did before:

and remove all the files manually or by selecting all of them and clicking on the unstage from commit button.

The question is not clearly posed. The reason is that git add has two meanings:

If in doubt, use

Because it does the expected thing in both cases.

Warning: if you do git rm --cached file on a file that was modified (a file that existed before in the repository), then the file will be removed on git commit! It will still exist in your file system, but if anybody else pulls your commit, the file will be deleted from their work tree.

git status will tell you if the file was a new file or modified:

As per many of the other answers, you can use git reset

I found this great little post that actually adds the Git command (well, an alias) for git unadd: see git unadd for details or..

will remove a file named filename.txt from the current index (also called the “staging area”, which is where changes “about to be committed” are saved), without changing anything else (the working directory is not overwritten).

If you're on your initial commit and you can't use git reset, just declare "Git bankruptcy" and delete the .git folder and start over

and unstage all files (from the root of the repo) with:

git restore was introduced in July 2019 and released in version 2.23.
With the --staged flag, it restores the content of the index (what is asked here).

When running git status with staged uncommitted file(s), this is now what Git suggests to use to unstage file(s) (instead of git reset HEAD <file> as it used to prior to v2.23).

Use git add -i to remove just-added files from your upcoming commit. Example:

Adding the file you didn't want:

Going into interactive add to undo your add (the commands typed at git here are "r" (revert), "1" (first entry in the list revert shows), 'return' to drop out of revert mode, and "q" (quit):

That's it! Here's your proof, showing that "foo" is back on the untracked list:

Here's a way to avoid this vexing problem when you start a new project:

Git makes it really hard to do git reset if you don't have any commits. If you create a tiny initial commit just for the sake of having one, after that you can git add -A and git reset as many times as you want in order to get everything right.

Another advantage of this method is that if you run into line-ending troubles later and need to refresh all your files, it's easy:

Maybe Git has evolved since you posted your question.

Now, you can try:

This should be what you are looking for.

Note that if you fail to specify a revision then you have to include a separator. Example from my console:

To remove new files from the staging area (and only in case of a new file), as suggested above:

Use rm --cached only for new files accidentally added.

To reset every file in a particular folder (and its subfolders), you can use the following command:

Use the * command to handle multiple files at a time:

You can unstage or undo using the git command or GUI Git.

Opens a window. Uncheck your files from Staged changes (will commit)

Just type git reset it will revert back and it is like you never typed git add . since your last commit. Make sure you have committed before.

Now I want to undo this add, before commit, git reset newFile.txt:

For a specific file:

For all added files:

Note: checkout changes the code in the files and moves to the last updated (committed) state. reset doesn't change the codes; it just resets the header.

To undo git add, use:

There is also interactive mode:

Choose option 3 to un add files. In my case I often want to add more than one file, and with interactive mode you can use numbers like this to add files. This will take all but 4: 1, 2, 3, and 5

This command will unstash your changes:

You can also use

to add parts of files.

Will remove a file named filename.txt from the current index, the "about to be committed" area, without changing anything else.

git add myfile.txt # This will add your file into the to-be-committed list

Quite opposite to this command is,

It will reset your head with that specified file. so, if your head doesn't have it means, it will simply reset it.

100
Undo git add --all
35
how to undo git add before commit
19
Undo multiple file and folder 'git add'
13
Remove all files for git commit?
13
Unstage only new files using Git
-1
What does git add * do and how to undo this
1412
How do I remove a single file from the staging area (undo git add)?
1412
Why there are two ways to unstage a file in Git?
1071
How to remove files from git staging area?
263
'git status' shows changed files, but 'git diff' doesn't
See more linked questions