Why use multi AZ deployment for AWS Aurora

Generally when using AWS RDS, the recommended practice to achieve high availability is to deploy hot replica in different AZ (multi AZ deployment). Also, some read replicas can be brought up to improve read performance.

I've read AWS Aurora documentation, it uses common virtual storage layer, which is replicated on 3 AZ, with two copies in each AZ. 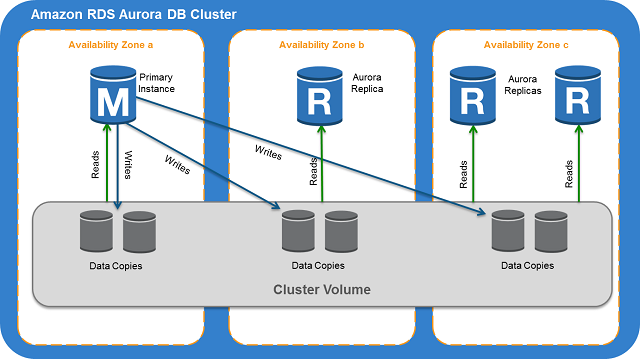 My question is this: Is there any need to use Amazon multi AZ deployment of Aurora DB cluster, if Aurora itself is capable of healing itself, and has its storage distributed over multi AZs? If it keeps 2 storage copies in each of 3 AZs, then its as reliable as using the multi AZ replica setup for failover. Also, during failover. it automatically creates another instance (if no read replica exist) or switches the primary. I really do not understand any need to create additional requirement of using multi AZ aurora cluster to 'improve' availability.

Is it possible that there's some scenario where availibility would suffer under default Aurora deployment? What happens during loss of an entire AZ which contains the primary Aurora DB node?

If you are only interested in your data not being lost, then a non-multi AZ would probably work fine because, as you said, the data is replicated for you.

But the running instance of Aurora still lives on a physical machine, and that physical machine lives in a single AZ, so if that AZ goes down, while you may not lose any data you won't necessarily have access to it.

A multi-AZ deployment has a physical machine running in more than one AZ, so if one AZ goes down, the database server in the other AZ can still serve your requests.

This behavior is different from standard non-Aurora Multi-AZ deployments, which maintain a separate synchronously-replicated 'standby instance' which cannot be used as a read-scaling endpoint, and vice versa (standard RDS Read Replicas cannot be used as Multi-AZ failover targets).

Even though Aurora data is backed up across AZs, having a replica instance already running can still significantly reduce the amount of time it takes to recover from a failure of the primary instance. The typical amount of time Aurora takes to recover from a failover with an Aurora Replica available is 1-2 minutes, compared to 10 minutes without a Replica, as described in Fault Tolerance for an Aurora DB Cluster:

If the DB cluster has one or more Aurora Replicas, then an Aurora Replica is promoted to the primary instance during a failure event. [...] However, service is typically restored in less than 120 seconds, and often less than 60 seconds. [...]

2
AWS - What happened to the failed Primary Instance after it recovers
1
issues with creating cross region read replica cluster for RDS aurora using terraform
3
multi-master over multi-region Aurora - possible?
1
aws rds multi-az configuration
1
Is it possible to stop an AWS Postgres Aurora Global Database?
1
Is there any replication lag for aws Aurora cluster or can we ever read the stale data due to replication lag?
1
terraform aws serverless v2 multi AZ