R has a number of standard symbols / shapes that can be used as markers of data points in an R line chart (in case ambiguous, see http://www.cookbook-r.com/Graphs/Shapes_and_line_types/ on what I mean).

What I want to do is use my own custom icons (e.g. GIFs of apple, banana, cherry, etc) in place of the standard shapes.

How can I do so in R? Doesn't have to be native R graphics, I'm open to packages eg ggplot2 etc.

My intended use is in a line chart where the markers will appear on the legend as well.

The answers here ( Labelling the plots with images on graph in ggplot2 ) addresses a similar question by plotting the image directly as if they are independent items, so not really tied to the data / legend.

I don't know of a way to use custom point markers that work with geom_point (though you could create your own geom as suggested by @baptiste). However, if you're willing to endure some coding pain, you can use annotation_custom to create something similar to what you'd get with geom_point. The painful part is that you have to make some manual adjustments (though you could probably create programmatic logic that would handle some of that for you if you're going to do this a lot). The plot also renders very slowly. Still, it was fun to take a crack at it.

Load packages and get two images that will become our point markers:

Finally, add the legend and turn off clipping so that the legend will show up on the final plot: 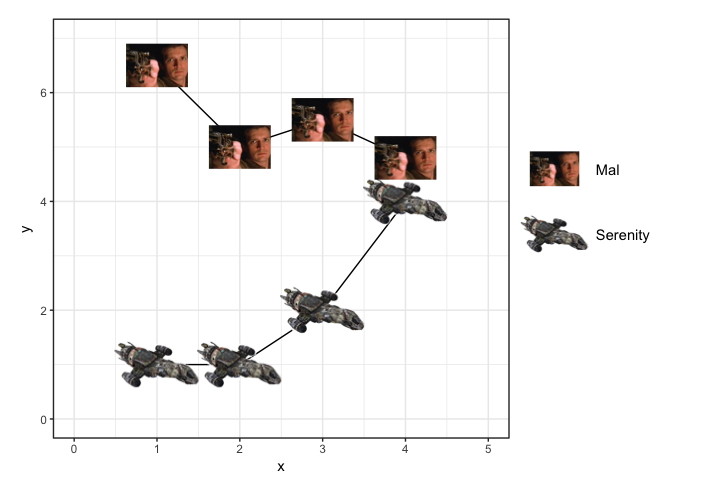 UPDATE: The new ggimage package might ulimately make this a bit easier. Below is an example. There are a few things I'd like to improve about the resulting plot.

Perhaps future versions of the package will create additional flexibility related to these issues, or perhaps there's already a way I'm not aware of to address these concerns. 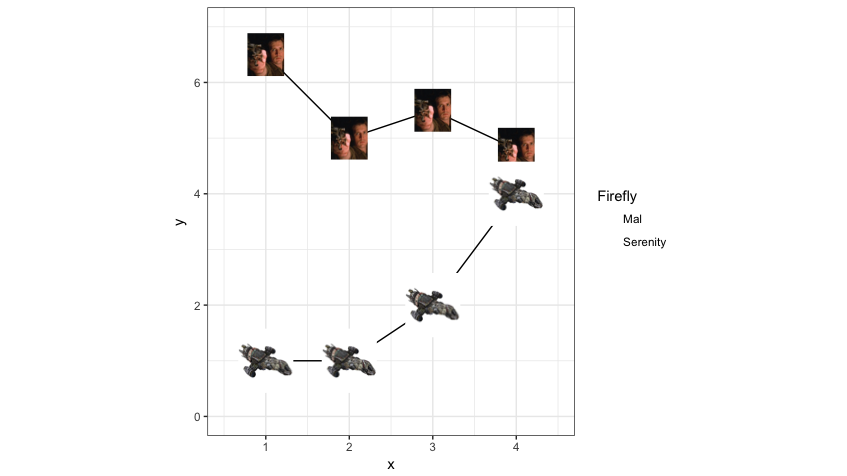 13
Labelling the plots with images on graph in ggplot2
6
How to plot 32 bit unicode characters? R 3.2.2 hangs on Windows/RStudio