How to refresh the page after a ServiceWorker update?

I've consulted a lot of resources on Service Workers:

However, I can't for the life of me figure out how to update the page after a new ServiceWorker has been installed. No matter what I do, my page is stuck on an old version, and only a hard refresh (Cmd-Shift-R) will fix it. No combination of 1) closing the tab, 2) closing Chrome, or 3) location.reload(true) will serve the new content.

I have a super simple example app mostly based on SVGOMG. On installation, I cache a bunch of resources using cache.addAll(), and I also do skipWaiting() if the current version's major version number doesn't match the active version's number (based on an IndexedDB lookup):

I'm using a semver-inspired system where the major version number indicates that the new ServiceWorker can't be hot-swapped for the old one. This works on the ServiceWorker side - a bump from v1.0.0 to v1.0.1 causes the worker to be immediately installed on a refresh, whereas from v1.0.0 to v2.0.0, it waits for the tab to be closed and reopened before being installed.

However, the content that gets served to the main thread is always stuck on an old version of the page ("My version is 1.0.0"), regardless of whether I increment the version to 1.0.1 or 2.0.0.

I'm kind of stumped here. I was hoping to find an elegant semver-y solution to ServiceWorker versioning (hence my use of require('./package.json').version), but in my current implementation, the user is perpetually stuck on an old version of the page, unless they hard-refresh or manually clear out all their data. :/

Found the issue – you need to avoid any cache headers on the ServiceWorker JS file itself. Setting the cache to max-age=0 immediately solved the problem: https://github.com/nolanlawson/serviceworker-update-demo/pull/1

In Chrome Canary you can do all sort of Service Worker profiling and management like unregister, clear in the Applications Tab: 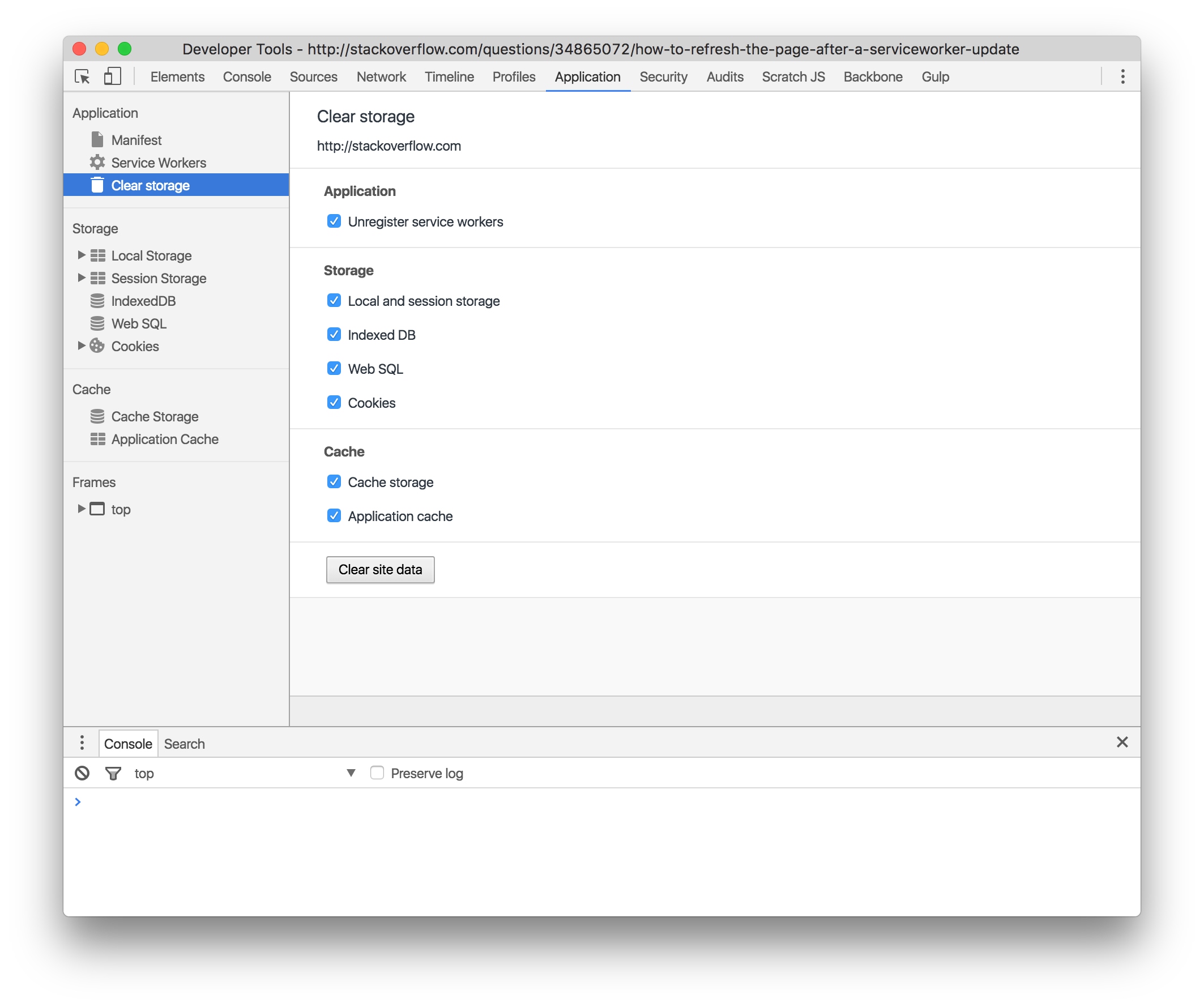 Pair that with chrome://devices/ to debug with your physical device.

Not the answer you're looking for? Browse other questions tagged javascript service-worker progressive-web-apps or ask your own question.

0
Updating a ServiceWorker only for new clients

2328
How to get the children of the $(this) selector?
3915
How do I copy to the clipboard in JavaScript?
2712
How do I modify the URL without reloading the page?
4366
How do I make the first letter of a string uppercase in JavaScript?
1783
Scroll to the top of the page using JavaScript?
2670
How do I get the current date in JavaScript?
2247
Get the size of the screen, current web page and browser window
2607
How can I refresh a page with jQuery?
6152
How to return the response from an asynchronous call