I am deleting some folders and files to make more space on my drive. I know that in path:

There are folders for each simulator and each version. This folder has around 11GB size for me. I know that I could delete simulators with old versions that I no longer use. But from that unique identifier I can't know which is the right one and which not. So my question is: Can I delete it all? It's okay if next time I wouldn't have any of my app in simulator but can I loose something more? Old versions of simulator? Or anything else? Thanks

The ~/Library/Developer/CoreSimulator/Devices/ path is where Xcode stores most of the data needed for your individual simulator devices.

Beau Nouvelle's suggestion about deleting downloaded simulator versions would not change the size of these folders, as the runtimes are stored elsewhere.

If you go to the terminal, you can use the simctl tool (comes with Xcode 6+) to list all of the actual simulator devices you have, along with the ids so that you can figure out what folders to delete.

Note, you'll see me constantly use xcrun simctl in this answer. That adds a bit of abstraction to things by having xcrun go look up the appropriate version of simctl for your currently chosen Xcode. Depending on your system, you might get by with dropping the "xcrun" part and the commandline should still find the simctl tool.

Here are some selected snippets of the output I received:

If you want, you can use those ids to identify the folder for the device in question and delete it manually (in this case I would delete the "D24C18BC-268C-4F0B-9CD8-8EFFDE6619E3" folder), but you can also use the simctl tool to do that.

Usage according to the 7.1.1 version of simctl:

So I can either delete the individual device(s):

or I can bulk delete all of the unavailable ones with:

There is also no need to limit yourself purely to unavailable simulators.

If you need any further help with the tool, it comes with a fairly straight forward help command:

Later versions of Xcode have made the above steps less effective. I only know about Xcode 13.1 for sure. While deleting the simulators still clears up space in the ~/Library/Developer/CoreSimulator/Devices/ folder, sometimes this doesn't help as the files have just moved to live off under /var/folders in some folder called Deleting-<guid>, which takes up about as much space as the device original did. But this location requires root privileges to clean up or a reboot, neither of which are desirable. From some testing a colleague did, it seems if you delete the device folders first and then delete the device via xcrun simctl delete, this isn't an issue.

Sometimes Xcode likes to double up on its simulators.

Usually the fix for me has always been to just delete them all. Deleting them is harmless as you can always download them again later.

Just remember that if you have any old simulators in there (iOS 8.0-) you won't be able to download them again through Xcode.

You can now manage Xcode devices on the latest macOS through the storage manager.

About This Mac > Storage > Manage > Developer 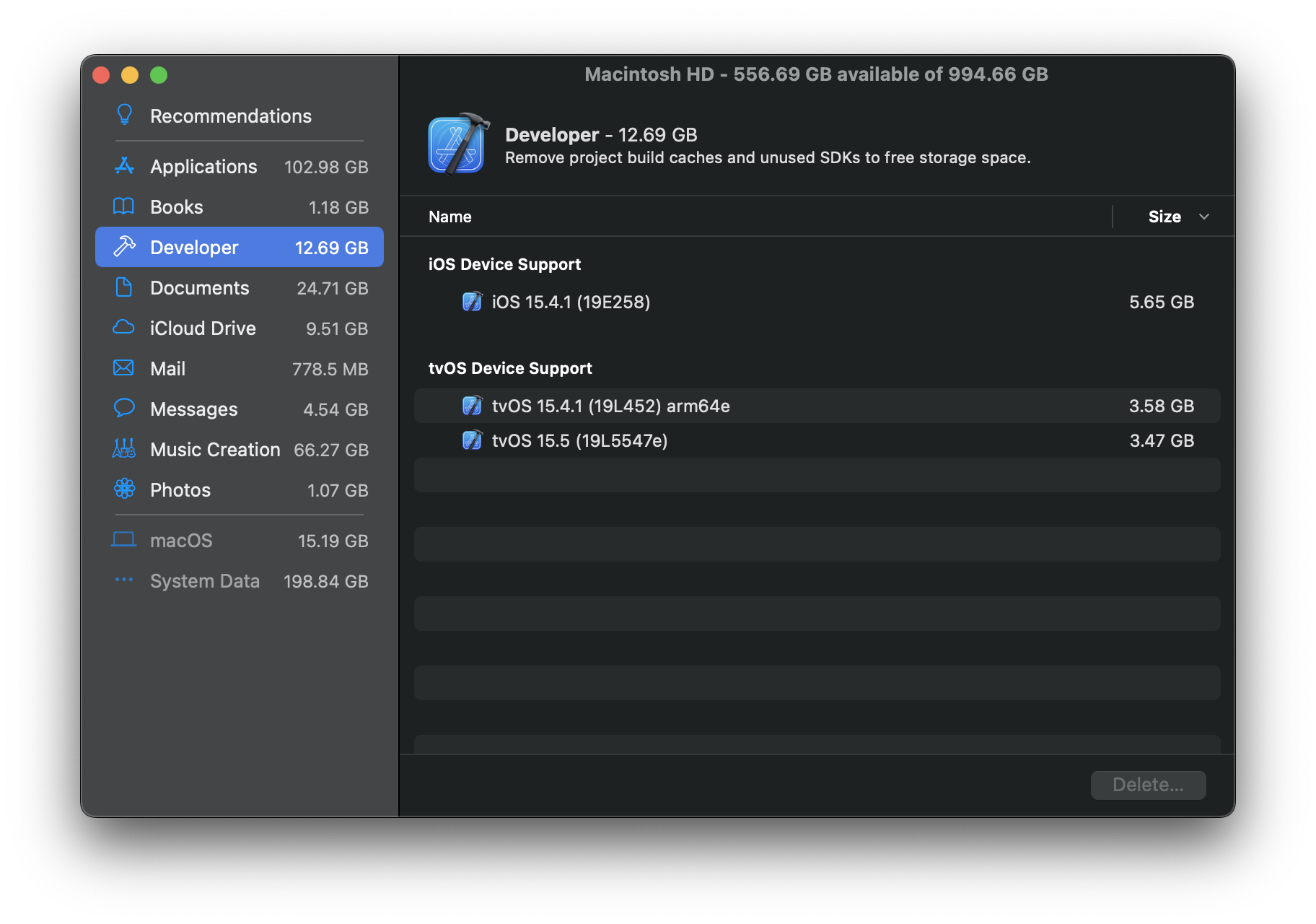 Xcode 14 now asks you at installation time the simulators you want to install. Xcode is now smaller in size, and faster to install — unless you develop for all platforms.

I had a similar issue a while back, xcode was taking up 47G on my drive. I tried deleting some Simulator Devices which stopped my xcode from working (crazy). So i deleted everthing related to xcode and installed fresh. Its just my experience.

I saved over 50GB the first time I did this.

491
Is it okay to delete the macOS Xcode CoreSimulator devices folder?

943
Git ignore file for Xcode projects
1302
Xcode - How to fix 'NSUnknownKeyException', reason: … this class is not key value coding-compliant for the key X" error?
1465
How can I "add existing frameworks" in Xcode 4?
696
Version vs build in Xcode
262
Xcode Simulator: how to remove older unneeded devices?
931
xcode-select active developer directory error
793
Xcode 6: Keyboard does not show up in simulator
902
Xcode error "Could not find Developer Disk Image"
491
Is it okay to delete the macOS Xcode CoreSimulator devices folder?
1
Xcode Device Simulator Files