I am currently trying to clone an existing project of mine from github. After clone I run composer install during the process I receive the following error:

I have seen references to:

None of the above have brought me any joy. I also have the same environment set up on another machine with the application working fine. The only difference here is the machine (working) wasn't cloned from git - it was the initial build environment.

The stack trace I am receiving:

Any help would be much appreciated. Thanks in advance.

Okay, after many hours of digging, the solution for my problem has been found. The reason why I say my problem is because the Exception is very mis-leading.

This exception simply means Laravel tried to log an error but couldn't instantiate Laravel's Log class. This is not due to the Log class going walk-abouts or hiding. This is because Laravel is still going through its boot process & has yet to load the Log class.

This has occurred in all versions of Laravel the only reason we have seen the exception thrown in laravel 5.1 <= is because previously Laravel silently discarded the problem & carried on through its boot process - basically, your app would still break however you would not receive the Log class exception.

In my particular case I didn't have the php-mysql extension installed causing Laravel to break during its boot process.

Ultimately, it is incredibly difficult to debug what you may have done wrong due to the error been very mis-leading.

EDIT: On how to debug this error and find out WHICH missing extension/component is actually causing the problem take a look at @Ben Johnson's answer.

In your .env file make sure you have no spaces for values

for example this is allowed

this is not allowed

you can wrap the value in quotes if you have spaces.

really wish they used json for the .env file, maybe we should request that feature

The underlying error is revealed by modifying vendor/laravel/framework/src/Illuminate/Container/Container.php and placing the following at the top:

(Credit to https://laracasts.com/discuss/channels/general-discussion/class-log-does-not-exist/replies/160902 for this idea.)

To add to the list of root-causes for this message, defining a closure in a configuration file and calling php artisan config:cache subsequently will cause this (at least in Laravel 5.1). Solution for this manifestation: don't define closures in Laravel configuration files, per https://github.com/laravel/framework/issues/9625 .

Remove file bootstrap/cache/config.php . This file may not be displayed on windows, if so, use double commander for example. Definitelly will work!

It may be caused by caching .env file, if it's your case, try to remove bootstrap/cache/config.php

I was noticing the same behavior after adding a few lines to my .env files. Spaces are not allowed without quotes, and so this can be fixed like:

APP_YOUR_NAME="A value with some spaces"

In my case, the missing of PDO extension was the problem. After installing it, the problem was fixed.

Because I wasn't satisfied with the rather clumsy debugging and reworking paths, etc to get the VM running smoothly, I reflected on the process and reinstalled the vagrant box laravel/homestead (virtualbox 1.0.1)

For me the issue potentially stemmed from a missing comma in config/app.php. The missing comma likely halted the compilation process and spit out the Uncaught ReflectionException: Class log does not exist error.

This is not a direct answer, but serves more as a guide post to those who venture into this abyss of silent errors

After repeated attempts to resolve the issue which include:

Critically, (for me) it seemed it was the virtualbox version in the initial set up:

I have attempted and failed with the following laravel/homestead virtualbox versions:

Also this is due to a syntax error in some file in the conf/ directory or .env file. In my case I got this error because I forget to put ::class at the end of the line when adding a service provider and facade, to the array providers and alises in conf/app.php file. I corrected this and the error disappeared.

When composer updating, i think laravel makes some validations.

I was typing a CMD in the CLI and accidentally typed it in the app config file. I had to follow this procedure in order to find the problem.

Solution, how to find problem:

This error may be caused by an error in one of the config files. To locate which file is causing it, change the function loadConfigurationFiles in /vendor/laravel/framework/src/Illuminate/Foundation/Bootstrap/LoadConfiguration.php to:

Run php artisan and the last loading "key" is the config file causing the error. Correct it and don't forget to remove the your var_dump command... Good luck.

After fixing the permission everything worked!

How to figure it?

Put a break-point in vendor/laravel/framework/src/illluminate/Foundation/Http/Kernel.php

line 101 inside the catch of the handle function.

This is how I've found out about the permission denied.

This problem is usually caused by spaces between words in the .env file. Make sure if you have something like

you replace it with

Tips1: when You missing (;) end of your code in config File

Other syntax Error This error comes.

Solved this issue after removing space in the .env file (view .env in sublime because vi editor doesn't show space at end of the .env file.) and run below commands.

In my case, I had used the route() method in a config file. Obviously, this method does not work because these files don't use the Illuminate Helper, they are simple .php with data.

The configuration files are read before instantiating the Log class, which causes the error that Jakehallas explains very well.

Yes as said by @jakehallas . Its not related to what is showing in exception.

Actually if there is any dababase issue or other config varilables issue causes this.

Actually when i tried to change something in database.php i just duplicated same file as database-copy.php. I didn't execpt this causes issue.

After gone through what i have done before i just removed this database-copy.php file its working fine..

I tried a lot of solutions provided here and elsewhere. It did not work for me. I solved it by manually removing /var/www/html/bootstrap/cache/compiled.php and updating the autoload files:

This type of error when you missed any of the dependencies of your project. Runphp composer.phar update

Run php artisan config:cache solved it for me.

Or if you are on shared hosting without access to the Terminal/CMD, add this to your Routs.php file:

Then go to yourdomain.com/config-cache to run this script.

Since no one has mentioned orchestra/testbench yet I thought I'd just add the solution to my problem.

I was writing a Laravel package when I got this error in one of my unit tests. I was using orchestra/testbench to enable testing of Laravel-specific parts of the code.

The problem was simply that the test class was extending PHPUnit\Framework\TestCase instead of Orchestra\Testbench\TestCase.

I needed to wrap

In my case, a comma is missing in my config file (config/app.php) after I merged my branch to master. 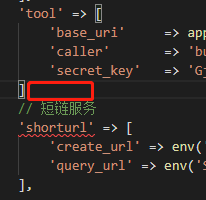 it was a syntax error, but didn't display it.

As previous answers has outlined we had an issue with one of our configuration files in laravel. We used the global $app variable which were no longer possible in laravel 5.2+.

The way we found this was to check which file failed to load in the loadConfigurationFiles method in src/Illuminate/Foundation/Bootstrap/LoadConfiguration.php.

Not the answer you're looking for? Browse other questions tagged php laravel centos7 laravel-5.2 or ask your own question.