When an user creates a mistake in the configuration of NLog (like invalid XML), We (NLog) throw a NLogConfigurationException. The exception contains the description what is wrong.

But sometimes this NLogConfigurationException is "eaten" by a System.TypeInitializationException if the first call to NLog is from a static field/property.

E.g. if the user has this program:

and there is a mistake in the config, NLog throws:

But the user will see: 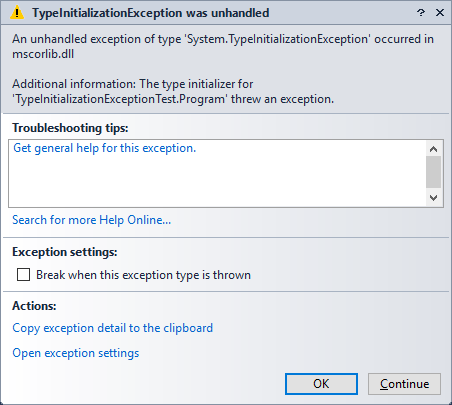 "Copy exception details to the clipboard":

So the message is gone!

please note that I'm the library maintainer, not the user of the library. I cannot change the calling code!

I'll just point out the underlying problem you are dealing with here. You are fighting a bug in the debugger, it has a very simple workaround. Use Tools > Options > Debugging > General > tick the "Use Managed Compatibility Mode" checkbox. Also untick Just My Code for the most informative debugging report: 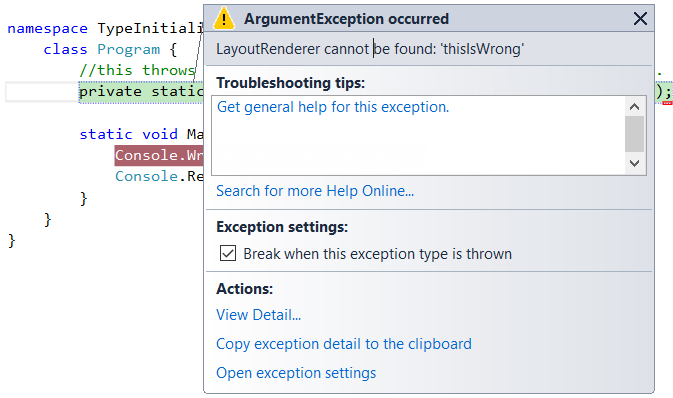 If Just My Code is ticked then the exception report is less informative but still can be drilled down easily by clicking the "View Detail" link.

The option name is unnecessarily cryptic. What it really does is tell Visual Studio to use an older version of the debugging engine. Anybody that uses VS2013 or VS2015 will have this trouble with the new engine, possibly VS2012. Also the basic reason that this issue did not have be addressed in NLog before.

While this is a very good workaround, it is not exactly easy to discover. Nor would programmers particularly like to use the old engine, shiny new features like return value debugging and E+C for 64-bit code are not supported by the old engine. Whether this is a truly a bug, an oversight or a technical limitation in the new engine is hard to guess. This is excessively ugly so don't hesitate to label it "bug", I strongly recommend you take this to connect.microsoft.com. Everybody will be ahead when it gets fixed, I scratched my head over this at least once that I remember. Drilled it down by using Debug > Windows > Exceptions > ticked CLR Exceptions at the time.

A workaround for this very unfortunate behavior is sure to be ugly. You do have to delay raising the exception until program execution has progressed far enough. I don't know your codebase well enough, but delaying parsing the config until the first logging command ought to take care of it. Or store the exception object and throw it on the first log command, probably easier.

The reason I see is because the Type initialization of Entry point class is failed. Since no type was initialized, so the Type loader has nothing to report about the failed type in TypeInitializationException.

But if you change the Static initializer of logger to other class and then refer that class in Entry method. you'll get the InnerException on TypeInitialization exception.

Now you'll get the InnerException because the Entry type was loaded to report the TypeInitializationException.

Hope now you get the idea to keep the Entry point clean and Bootstrap the application from Main() instead of static property of Entry point class.

You can also utilize the Lazy<> to avoid the execution of configuration initialization at declaration.

Alternatively, try Lazy<> in the LogManager for logger instantiation so that the configuration initialization happens when actually the first log statement occurs.

I analyzed the source code of NLog and seems like it's already implemented and It make sense. According to the comments on property "NLog should not throw exception unless specified by property LogManager.ThrowExceptions in LogManager.cs".

Fix - In the LogFactory class the private method GetLogger() has the initialization statement which is causing the exception to happen. If you introduce a try catch with the check of property ThrowExceptions then you can prevent the initialization exception.

Also it would be great to have these exceptions/errors stored somewhere so that It can be traced why Logger initialization failed because the they were ignored due to ThrowException.

I said in an earlier comment that I'm unable to reproduce your issue. Then it occurred to me you were only looking for it in the popup exception dialog, which doesn't display a show details link.

So here's how you can get at the InnerException anyway, because it definitely is there, except Visual Studio doesn't report it for some reason (probably because it's in the entry point type as vendettamit figured out).

So, when you run the tester branch, you get the following dialog: 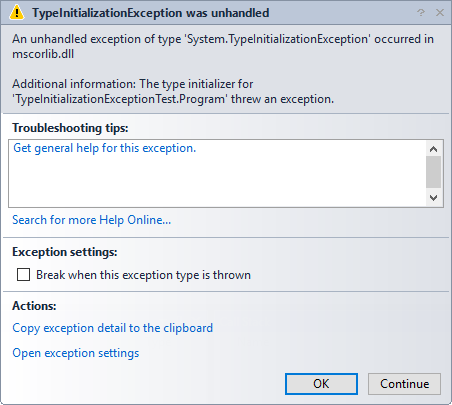 And it doesn't show the View Details link.

The Copy exception detail to the clipboard isn't particularly helpful either:

Now, dismiss the dialog with the OK button and head towards the Locals debug window. Here's what you'll see:

See? The InnerException definitely is there, and you found a VS quirk :-)

So the initialization of logger will happen (and possibly fail) when you'll first access the logger - not in some crazy static context.

It is ultimately burden of user of your library to stick to the best practices. So if it were me I'd keep it as it is. There are few options though if you really have to solve it on your end:

1) Don't throw exception - ever - this is valid approach in logging engine, and how log4net works - i.e.

2) wrap the lazy approach around the implementation of Logger class (I know your Logger class is much more complex, for sake of this problem let's assume it has just one method Log and it takes string className to construct Logger instance.

You'll get rid of this problem (the real initialization will happen while first log method is called and it is backward-compatible approach); only problem is you've added another layer (I don't expect any drastic downgrade of performance, but some logging engines are really into micro-optimization).

The only solution I see now is:

System.TypeInitializationException is always or almost always occurred from not correct initialisation the static members of a class.

You have to check LogManager.GetCurrentClassLogger() via debugger. I'm sure the error is occurred inside that part of code.

Also i suggest you double check your app.config and make sure you haven't included anything wrong.

When .NET loads the type, it must prepare all it's static fields before the first time that you use the type. Sometimes, initialization requires running code. It is when that code fails that you get a System.TypeInitializationException.

1) The InnerException is not visible it is very typical for this type of Exception. The version of Visual Studio doesn't matter (ensure that the "Enable the exception assistant" option is checked - Tools> Options>Debugging>General)

2) Usually the TypeInitializationException hides the real exception which can be viewed via InnerException. But the test example below shows how you can populate inner exception info:

But sometimes this NLogConfigurationException is "eaten" by an System.TypeInitializationException if the first call to NLog is from a static field/property.

Nothing strange. Someone missed the try catch block somewhere.

Not the answer you're looking for? Browse other questions tagged c# .net visual-studio exception nlog or ask your own question.