I am trying to write a regular expression that will match values such as U.S., D.C., U.S.A., etc.

Here is what I have so far -

Note how this expression matches but does not include the last letter in the acronym.

Can anyone help explain what I am missing here? 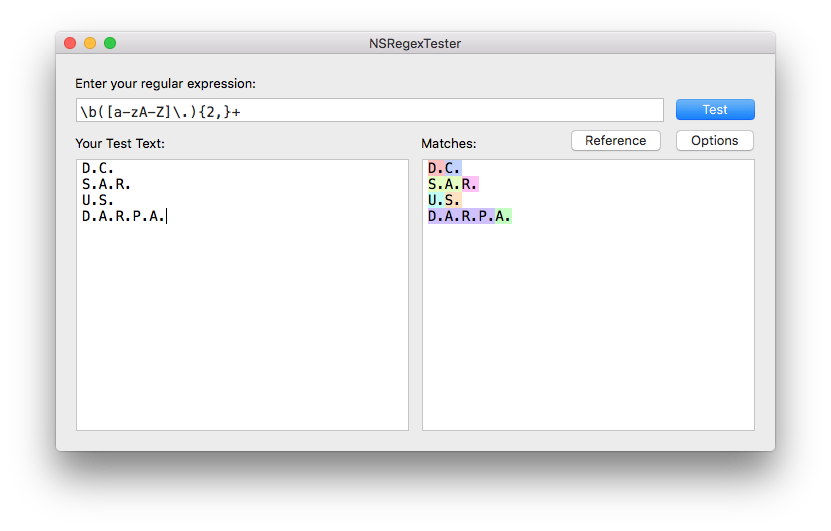 I'm posting the solution here in case this helps anyone.

It seems as if a non-capturing group is required here.

?: (non-capturing group) is there because you want to omit capturing the last iteration of the repeated group.

For example, without ?:, 'U.S.A.' will yield a group match 'A.', which you are not interested about.

None of these proposed solutions do what yours does - make sure that there are at least 2 letters in the acronym. Also, yours works on http://rubular.com/ . This is probably some issue with the regex implementation - to be fair, all of the matches that you got were valid acronyms. To fix this, you could either:

I prefer the former solution - to do this you'd have:

Edit: I've realized this doesn't actually work with other punctuation in the string, and a couple of other edge cases. This is super ugly, but I think it should be good enough:

This assumes that you've got this [[:punct:]] character class, and allows for 0-1 punctuation marks after an acronym that won't be captured. I've also fixed it up so that there's a single capture group that gets the whole acronym. Check out validation at http://rubular.com/r/lmr0qERLDh

Bonus: you now get to make this super confusing to anyone reading it.

I have slightly modified the solution above:

to enable capturing acronyms containing more than one letter between the dots, like in 'GHQ.AFP.X.Y'

5
Regex to extract acronyms
0
How to count the number of lines in a text?
-3
Regex to match all acronyms

638
How to match all occurrences of a regex
1030
How to validate phone numbers using regex
5047
Regular expression to match a line that doesn't contain a word
2072
RegEx match open tags except XHTML self-contained tags
175
What's the difference between "groups" and "captures" in .NET regular expressions?
1221
Negative matching using grep (match lines that do not contain foo)
536
Regex to match only letters
406
Greedy vs. Reluctant vs. Possessive Qualifiers
634
Regex Match all characters between two strings