Once long ago, out of curiosity, I've tried hex-editing the executable file of the game "Dangerous Dave". I've looked around the file for any strings I could find, and made some random edits to see if it would actually change the text displayed within the game.

I was surprised to see the result, which I have now recreated using a hex-editor and DOSBox: 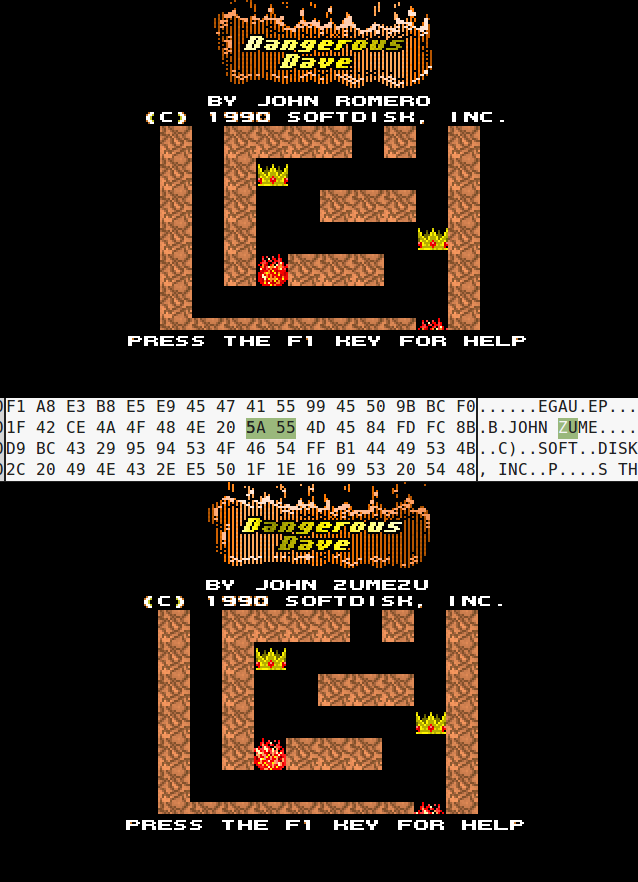 What is the cause of this? My first guess would be trying to make the executable smaller but just the code that reuses the characters would probably require more space than those 2 bytes to be saved. Is it just a trick done by the author, or just some compiler voodoo?

Tricky to say for sure without reverse-engineering, but my guess would be that a lot of the constant data in the program is compressed using an algorithm from the LZ family. These compression schemes work essentially in the way that you've observed: they encode repeated substrings as references to text that has previously been decoded.

These compression algorithms were probably used for more than just this one string, and not just for text either; it's quite possible that they were also used to compress other data, such as graphics or level layouts. In short, there were probably significant savings made by using this algorithm!

The use of these compression algorithms is common in older games as a way of saving disk space, but was not automatic - the implementation of this algorithm would likely have been something Romero added himself.

Not the answer you're looking for? Browse other questions tagged c binary dos elf or ask your own question.

261
How to create empty text file from a batch file?
409
Reading binary file and looping over each byte
620
Why is “while ( !feof (file) )” always wrong?
687
Can code that is valid in both C and C++ produce different behavior when compiled in each language?
605
Why does ENOENT mean “No such file or directory”?
9
Why does inserting characters into an executable binary file cause it to “break”?
1
Feeding Python Hex Output With Spaces into Compiled C File
2
Is it possible to modify a C program which is running?